State of the Union 2019: Insights from RAND 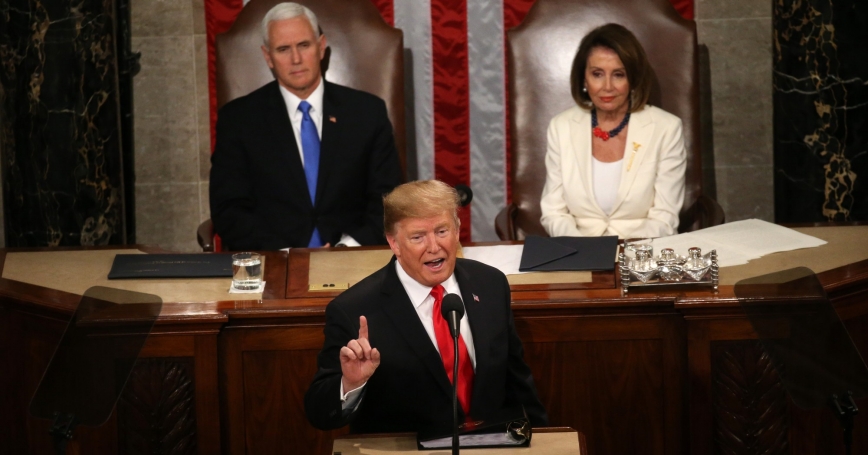 Much of last night's State of the Union speech, President Trump's second such address and his first before a divided Congress, focused on the issue that recently produced the longest government shutdown in U.S. history: border security—namely, whether legislators would authorize funds for a wall along the nation's southern frontier.

But border security isn't the only policy area the president mentioned in his address. To shed light on a wide range of topics that figured in his speech, we've rounded up insights from some of RAND's objective and nonpartisan research, analysis, and expertise.

Below are excerpts from President Trump's remarks, followed by context provided by RAND work.

Border Security, Immigration, and the Shutdown

“Congress has 10 days left to pass a bill that will fund our government, protect our homeland, and secure our very dangerous southern border.”

In a recent commentary, RAND's Raphael Cohen discussed historical uses of border walls to answer a fundamental question: What can these barriers realistically do?

Cohen describes walls as “delaying obstacles.” They represent “a tactic (if, at times, a critical one), but ultimately not a strategy,” he says. In other words, walls can buy time for other tools to work, but they are rarely themselves the reason for success. That's why the proposed border wall should be “viewed as a means to an end, rather than an end unto itself,” says Cohen.

In another recent commentary, RAND's Blas Nuñez-Neto outlined potential options to help America's overwhelmed immigration system. For example, Congress could consider letting Central American migrants apply for asylum—or another legal status that would allow them to live in the United States—from their home countries. This might prevent them from making the dangerous trek north. Another option would be to increase the number of immigration judges to decrease the backlog in court cases.

Commentary by RAND's Ryan Consaul during the partial government shutdown suggests that, if lawmakers are unable to reach a deal and agencies are again shuttered, new risks to homeland security could emerge. Why? Because when airport screeners and border agents work without pay, cartels and other criminals can exploit their financial hardships by trying to bribe them. Few officers have ever even been accused of corruption, notes Consaul, but even a small increase could compromise security.

“Much work remains to be done, but my relationship with Kim Jong Un is a good one. Chairman Kim and I will meet again on February 27th and 28th in Vietnam.”

As the second summit meeting between President Trump and North Korea's Kim Jong Un approaches, denuclearization will likely receive the bulk of attention. But the nuclear threat isn't an isolated issue. RAND researchers have set forth a complex set of four interconnected problems on the Korean Peninsula. The United States, its allies, and other powers—including China and Russia—should prepare for all of them.

As for Kim, RAND's Bruce Bennett argues that the North Korean leader's actions have contradicted his words. “Kim has not frozen his nuclear weapon program and is certainly not abandoning it,” says Bennett. “He appears to be doing exactly the opposite.”

Bennett suggests that it may be time for the United States to start testing Kim. “If he is sincere about abandoning his nuclear weapon program, he could take steps to demonstrate that sincerity.”

Bennett is the author of a recent RAND report that explores nine potential paths to Korean unification. Both North Korea and South Korea are interested in unification, but neither country is ready to be successful, the report concludes. The best path is likely associated with regime collapse in the North and would involve negotiating with the government that replaces Kim. Such a process would take many years. Preparing North Korean elites for unification may also be an important goal.

The Value of Correctional Education

“The First Step Act gives nonviolent offenders the chance to reenter society as productive, law-abiding citizens. Now, states across the country are following our lead.”

The First Step Act, bipartisan criminal justice reform signed into law in December, includes hundreds of millions of dollars in funding for education and jobs programs in America's prisons.

RAND research has shown that inmates who participate in any kind of educational program while behind bars are up to 43 percent less likely to return to prison. Moreover, these programs save taxpayers money. Every dollar invested saves nearly five in reincarceration costs over three years.

What to Do About Afghanistan and Iraq

"In Afghanistan and Iraq, nearly 7,000 American heroes have given their lives. More than 52,000 Americans have been badly wounded. We have spent more than $7 trillion in the Middle East… Great nations do not fight endless wars."

After recent news that the United States was negotiating with the Taliban to potentially draw the war in Afghanistan to a close, RAND's James Dobbins penned an op-ed in the Wall Street Journal on the subject. Dobbins, President George W. Bush's special envoy for Afghanistan after 9/11 and President Obama's special representative for Afghanistan and Pakistan in 2014 and 2015, urges caution. Withdrawing U.S. forces prematurely will cause the talks to collapse, he says. Whether the negotiations lead to enduring peace in the war-torn country will depend on many factors, including “American endurance.”

Dobbins is also the lead author of a recent RAND paper on the likely consequences of a “precipitous” U.S. withdrawal that is unrelated to a negotiated peace settlement. “Winning [in Afghanistan] may not be an available option, but losing certainly is,” the authors write. “A precipitous departure, no matter how rationalized, will mean choosing to lose.”

In Iraq, with ISIS's footprint drastically reduced over the last few years, the focus has turned toward stabilization. According to RAND experts, if stabilization efforts are insufficient, another wave of violence could envelop the country. Their research outlines key steps for the United States, Iraq, and the international community to address humanitarian needs, security, governance, and more.

“I know that Congress is eager to pass an infrastructure bill. And I am eager to work with you on legislation to deliver new and important infrastructure investment, including investments in the cutting-edge industries of the future.”

There are indeed problems with U.S. infrastructure. However, recent RAND research suggests that “not everything is broken” with transportation and water infrastructure funding and finance. A consensus on priorities, accompanied by targeted spending and policy changes, is needed.

According to lead author Debra Knopman, “Spreading federal dollars around to fund short-term, 'shovel-ready' projects without a sense of national purpose or priority will not get the nation where it needs to be.”

What can lawmakers do? A related research brief outlines 10 steps Congress could consider—in conjunction with states, local governments, and the private sector—to pursue a targeted approach.

As for “cutting-edge industries of the future,” RAND research has estimated the human cost of waiting for automated vehicles that are nearly perfect. Notably, putting autonomous vehicles on the road when they are just better than the average human could save hundreds of thousands of lives over the next three decades.