A Taiwan Diplomatic Victory Over China Could Be Inevitable 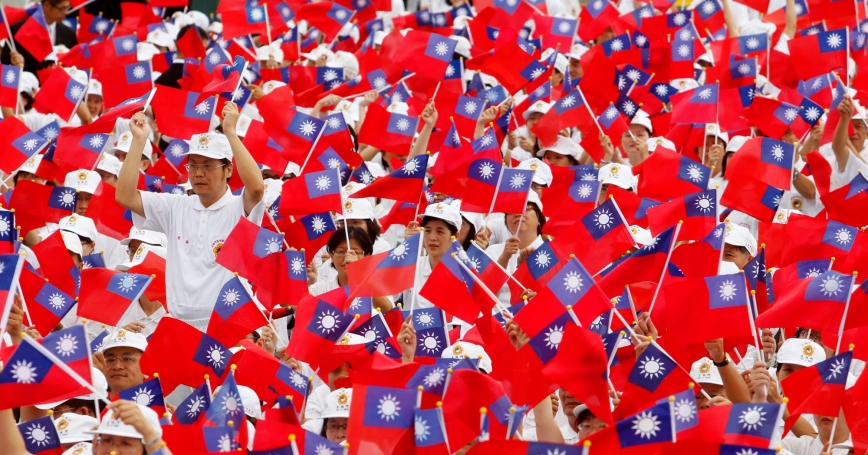 The main entrance of Taiwan's Ministry of Foreign Affairs is looking increasingly bare these days. Unfortunately, the ministry has been forced to remove five flags of diplomatic allies—including Burkina Faso, Sao Tome and Principe, Dominican Republic, Panama, and El Salvador—over the last two years as China and Taiwan have renewed their competition for recognition globally. Taiwan today is left with just seventeen partners comprised of mostly small impoverished nations predominantly clustered throughout Latin America and the Caribbean, including Oceania.

Beijing's tightening diplomatic squeeze of Taiwan is part of a larger strategy, including the exploitation of economic, military, and politically subversive pressure points, to bring the island's president, Tsai Ing-wen, to heel. Tsai has refused to agree to the so-called “1992 Consensus” that would require explicit acknowledgement of the “one China principle.” Her refusal has frustrated Chinese president Xi Jinping who has indicated that cross-Strait reunification is the only acceptable outcome. Without at least the initiation of political talks on Beijing's terms, China's pressure campaign is certain to continue, meaning, in the diplomatic domain, Beijing will relentlessly pursue additional Taiwan allies to cross over to its side.

Although it is difficult to identify the country most likely to flip next, there are troubling indications in numerous places. Last month, for example, Taiwan offered to send its ally Nicaragua a $100 million bailout loan as the government deficit in that country has ballooned to $320 million and President Daniel Ortega tries to quell protests against his regime. One cannot help but wonder whether Ortega is simply looking for funds to ensure his own survival, and whether Beijing might offer a better deal to a fellow authoritarian (it would not be the first time Ortega broke ties with Taiwan—he did so in 1985).

Out in the Pacific, the Solomon Islands, another Taiwan partner, is preparing to hold national elections in early April, and Taipei is receiving mixed messages. In January, the ruling party said it would review Taiwan relations if reelected. But earlier this month, the prime minister of the Solomon Islands, Rick Hou, welcomed the Taiwanese deputy foreign minister, Szu-chien Hsu, and noted that “no pressure from others will break” the friendship between the two countries. Even though Palau has enthusiastically supported Taiwan ties, there are rumors that the only real advocate for maintaining bilateral relations is President Tommy Remengesau, and that the rest of his government is displeased with the relationship. Either way, the region is warming up to China. According (PDF) to the communiqué issued after the Micronesian Presidents' Summit, held late last month, the Pacific Islands Forum—which includes all six of Taiwan's remaining partners in Oceania—should demonstrate a greater degree of “hospitality” to Taiwan and China. It is perhaps no coincidence that Tsai will be visiting the region starting on March 21.

And of course, the Vatican last year reached a provisional agreement with Beijing on bishop appointments in China, but as of yet, it is unclear whether a permanent deal might also require breaking formal relations with Taiwan. If the Vatican left Taiwan, then it would constitute an enormous blow to the island's psyche. The Holy See is Taipei's sole remaining partner in Europe. However, Taiwan should not worry too much about the Vatican. Xi's aggressive persecution of Catholicism (and of all religious and civic freedoms these days) by razing churches, desecrating Catholic symbols, and threatening underground worshippers strongly suggests he is unlikely to tolerate the growth in the Catholic faith in China.

Derek Grossman is a senior defense analyst at the nonprofit, nonpartisan RAND Corporation. He formerly served as the daily intelligence briefer to the Assistant Secretary of Defense for Asian and Pacific Security Affairs at the Pentagon. This piece is based on research recently presented at “Monitoring the Cross-Strait Balance: Taiwan's Defense and Security,” a workshop hosted by the Shorenstein Asia-Pacific Research Center at Stanford University.

This commentary originally appeared on The National Interest on March 20, 2019. Commentary gives RAND researchers a platform to convey insights based on their professional expertise and often on their peer-reviewed research and analysis.