Hadrian's Wall Was a Policy Statement; So Is Donald Trump's 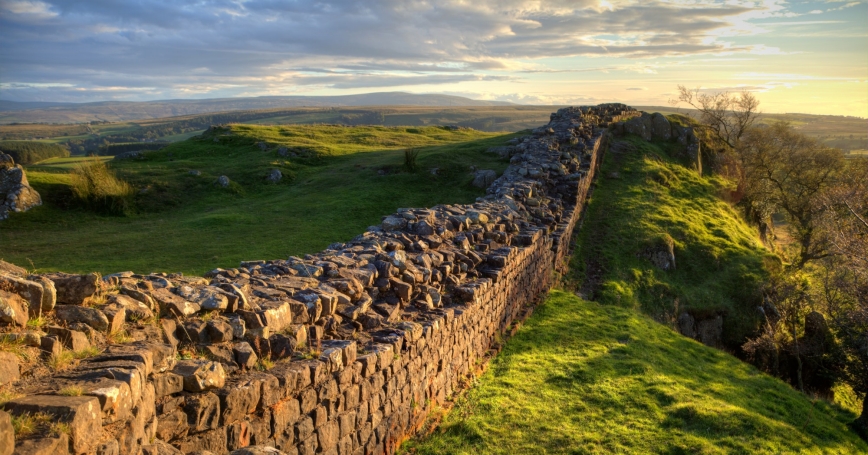 A stretch of Hadrian's Wall at Walton's Crags in Northumberland, England

Hadrian's Wall runs 73 miles across northern England from the North Sea in the east to the Irish Sea in the west, marking the northern frontier of the Roman Empire in 122 A.D. Made of squared stone, its height varies from 11 to 20 feet. It was finished with plaster, then whitewashed—winding across the landscape like some giant art installation. Deep ditches filled with entanglements augmented the wall itself, which was reinforced by turrets, castles and forts. It took three Roman legions six years to complete the project.

President Donald Trump's initial proposal for a wall on the Mexican border described it as a 30-foot-high concrete wall running more than 2,000 miles. That plan has been abandoned in favor of a less ambitious 722-mile barrier that includes a combination of wall, fences and other security measures—steel slats are also in the running. Opponents of the wall are suggesting a “smart” or virtual wall of high-tech surveillance systems, but the president has tenaciously held on to the idea of a large physical structure, a “big, beautiful wall,” and seems determined to get it.

It's not clear if Hadrian's Wall was necessary to prevent Scottish fighters from invading the Roman Empire. Neither is it clear how effective Trump's wall would be at repelling illegal immigrants and smugglers. Hadrian's Wall may have been of symbolic value to those on both sides of it. Trump's could be, too.

Historians are still debating exactly why the Emperor Hadrian built his wall. The tribes of Scotland had resisted the Roman advance, but did not pose much of a military threat, certainly not one requiring such massive defensive measures. And Scotland was sparsely populated at the time.

Hadrian's Wall may have been of symbolic value to those on both sides of it. Trump's could be, too.

Walls enable states to more effectively control traffic and impose duties, but it is not clear that there was enough commerce in the area to justify the cost of building the wall. Hadrian's autobiography might have provided clues about his thinking, but it has not survived.

Walls are built primarily for security reasons, but to answer why Trump is so fiercely committed to a physical wall on the southern border, one must look beyond the talk of an “invasion” and “national security crisis.” Mexico is not about to invade the United States, and the White House has backed off from its claim that thousands of terrorists are being stopped at the southern border.

A wall might impede the smuggling of drugs or people, but probably is not the most effective or efficient way of doing so. There are still over 300 ports of entry on the southern border, which are essential to commerce.

And desperate people have a way of getting over or under physical barriers—or around them. Hundreds of thousands of migrants cross the Mediterranean each year to get to Europe. In 1980, 125,000 Cubans crossed the straits to land in Florida. Fleeing political chaos in 1991, more than 40,000 Haitian refugees headed across the Caribbean to Florida. Many were turned back. Others were sent to Guantanamo Bay. Drowning boat people also create humanitarian crises.

As for the narcotics traffic, it was the more effective interdiction of the drug traffic coming across the Caribbean from Columbia that led to the development of new smuggling routes through Mexico and Central America and the growth of the Mexican cartels. The drug traffic will likely adapt to any new measures.

A wall might impede the smuggling of drugs or people. But it's probably not the most effective or efficient way of doing so.

Walls can also be powerful pieces of architectural propaganda. Many people in the United States fear displacement by peoples of other races, ethnicities and religions—in other words, immigrants. And not just illegal immigrants, but all foreigners.

America is changing demographically. Increased immigration, especially from Latin America, Asia and the Middle East, has caused anxiety. Not a few white American Christians see themselves being displaced as a matter of misguided government policy. The promise of a wall could be seen as a visible commitment to prevent this.

Hadrian understood the power of architecture. Building walls of wood and stone across the northern reaches of the empire not already protected by natural barriers was a statement of policy. Rome could not expand indefinitely, its legions perpetually at war on distant frontiers. Hadrian's Wall drew a bright shining line between the civilized world and the turmoil beyond. The empire would be protected, but its edges would be fixed.

Trump's wall could be symbolic of a broader worldview. In that view, the post-9/11 strategy of fighting them there instead of here has led to involvement in seemingly endless wars. The administration apparently sees little value in what it believes are costly alliances to protect others, as shown by its plans to disengage from Afghanistan and Syria. Trump's determination on the wall could reflect a desire to separate the United States from what he sees as the disorder and duplicity of the world outside.