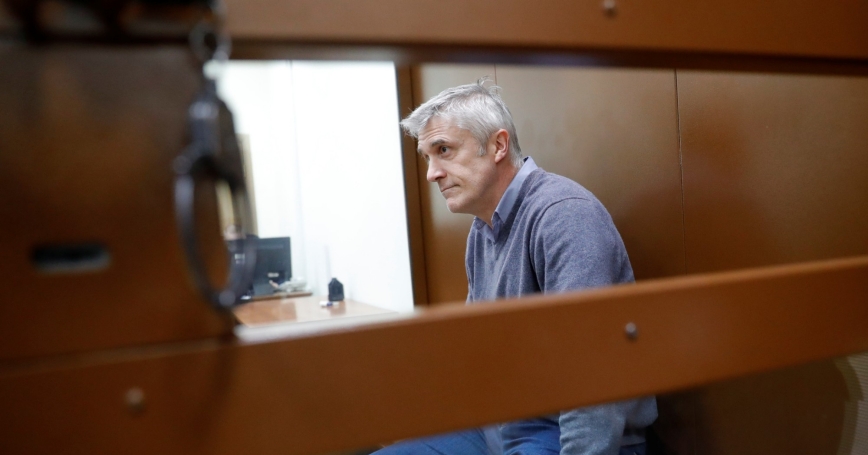 Baring Vostok private equity group founder Michael Calvey, who was detained on suspicion of fraud, inside a defendants' cage in Moscow, Russia, February 15, 2019

On Feb. 28, a Russian court denied bail and house arrest for U.S. citizen Michael Calvey, who was jailed two weeks earlier on alleged fraud charges. For over two decades, Calvey has been one of the country's most respected foreign investors.

Facing an outcry at home and abroad, the Kremlin might now have misgivings. Perhaps this case will help focus minds on the value of foreign investment and reform for Russia's economic future.

Since 1994 Baring Vostok Capital Partners, which Calvey founded, has invested over $2.8 billion in 80 companies in Russia and other countries in the former Soviet Union. On February 16 a Moscow court ruled that Calvey would be held in pre-trial detention for two months.

Calvey and other detained executives from Baring Vostok may have run afoul of well-connected interests. Baring Vostok has taken to arbitration in London a commercial dispute with a businessman, according to one media source, who is friendly with the son of Nikolai Patrushev, secretary of Russia's Security Council and former head of the Federal Security Service (FSB). Whether he or someone else, the person behind the arrests must have Kremlin clout.

In his Feb. 20 state-of-the-nation address, President Vladimir Putin hinted at regret, saying “honest businesses should not live in fear of prosecution.” Yet Bloomberg reports that at a closed-door meeting last week Putin said the charges could not be ignored, implying he had consented to them.

In the address Putin also emphasized, “we need a high rate of economic growth.” Since the global financial crisis of a decade ago, Russia's economy has faced near-stagnation.

According to University of Chicago economist Konstantin Sonin, the average annual growth rate over the 2008-2017 decade was 1.2 percent. “Boosting growth will be impossible without deep structural reforms.” This year the economy may grow by 1.5 percent, according to the World Bank.

According to the Financial Times, “chronic under-investment, sanctions and lack of reform” are responsible for Russia's economic woes. The Kremlin has the power to address these problems.

Russia could mobilize more investment by improving conditions for it. A first step, dramatized by the Calvey case, might be to enhance (PDF) respect for the rule of law. In the World Justice Project's 2017-18 Rule of Law Index, 88 countries perform better. Russia could lessen corruption.

Russia could deepen reform. By reversing the trend toward state domination of the economy, the Kremlin could offer more leeway to the country's dynamic private sector. Russia's Federal Anti-Monopoly Service says that in 2015 state-owned enterprises controlled about 70 percent of the country's GDP, versus 35 percent a decade earlier.

Russia could also lessen the burden of Western sanctions. The big ones on finance and energy development came after Russia invaded eastern Ukraine in 2014. Other sanctions have been imposed, such as in response to Russia's annexation of Crimea and interference in the 2016 U.S. election. An end to such malign activities would likely bring sanctions relief.

Putin has an incentive to grow the economy. A poll last month by the state-run Public Opinion Research Center found that public trust in Russia's President had fallen to 33.4 percent, a low in recent years. Moscow's Higher School for Economics forecasts that again this year real per capita incomes of Russians are likely to fall. Reforms could unlock economic potential and enable Russians to improve their living standards.

William Courtney is an adjunct senior fellow at the nonprofit, nonpartisan RAND Corporation, and was U.S. Ambassador to Kazakhstan, Georgia and a U.S.-Soviet commission to implement the Threshold Test Ban Treaty.

This commentary originally appeared on The Moscow Times on March 1, 2019. Commentary gives RAND researchers a platform to convey insights based on their professional expertise and often on their peer-reviewed research and analysis.