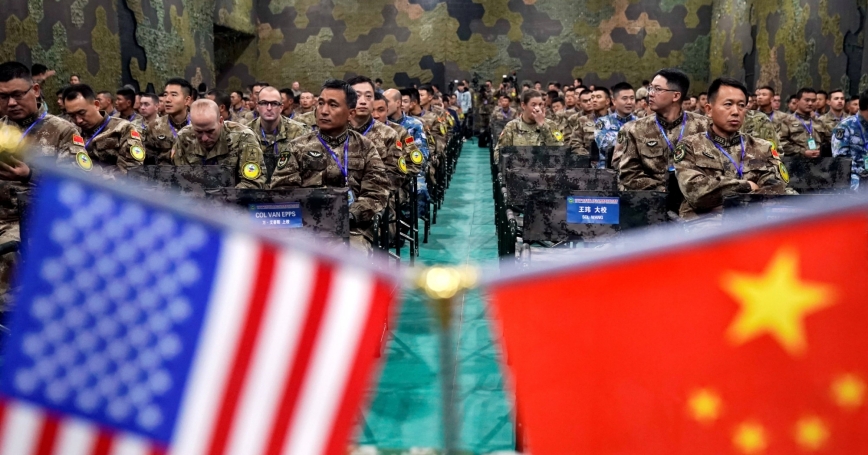 The National Security Strategy describes (PDF) a return of great power rivalry, with China as the leading challenger. Whether dealing with China's ethnic cleansing in Xinjiang, military build-up and threat to (PDF) Taiwan, violation (PDF) of its WTO commitments, or “unlawful” taking of Canadian hostages, the U.S. has made clear it “will not back down” in the face of outrageous Chinese behavior. Instead, the U.S. is pushing back against what U.S. officials have called Beijing's “malign influence.” The National Defense Strategy (PDF) prioritizes strategic competition too, with Acting Secretary of Defense Patrick Shanahan noting that his top three priorities are “China, China, China.” What are the implications for U.S.-China military-to-military contacts of these developments?

The Annual Report to Congress on Military and Security Developments Involving the People's Republic of China notes (PDF) that military-to-military relations are intended to “manage and reduce risk” and “clarify and develop areas of cooperation.” With the U.S. less focused on engaging and shaping and more focused on competing with and deterring the People's Liberation Army (PLA), it might make sense to retain high-level communications channels, while reducing largely symbolic contacts. Previously, multilateral exercises were seen as a tool to socialize the PLA to the international rules of the road. Unfortunately, China collected the prestige of being invited to such events while continuing to act belligerently towards its neighbors, building artificial islands in the South China Sea in violation of the 2012 Declaration on the Conduct of the Parties and militarizing these islands despite Xi Jinping's 2015 promise to President Obama not to do so. This made the cancellation of the PLA's invite to the 2018 RIMPAC exercise appropriate. China's continued harassment of U.S. air and maritime platforms operating in international airspace and waters means invitations to the PLA to join multilateral exercises will likely remain off the table.

The U.S. side could benefit from continuing high-level dialogues, in order to reinforce the PLA's need to abide by the Code for Unplanned Encounters at Sea (PDF) and to press China to extend such an arrangement to the air domain as well. The U.S. could also dialogue with China on the rules of the road for cyberspace, including non-targeting of critical infrastructure and how to do agreed-upon attribution so that third parties can't spark a digital conflict between the two sides. Discussions on limiting strategically destabilizing systems such as counter-space assets and hypersonic glide vehicles could reduce the prospect of a costly arms race while preventing proliferation to third countries. Recently, the PLA has repeatedly directed lasers against U.S. airframes—this is another topic to address. Finally, the two sides could pursue something positive, such as discussing how to mount an operation to deal with an Ebola outbreak in Africa or how to coordinate on a joint response to a super-typhoon or tsunami in the Indo-Pacific.

Scott W. Harold is the associate director of the Center for Asia Pacific Policy and a senior political scientist at the nonprofit, nonpartisan RAND Corporation.

This commentary originally appeared on ChinaFile on March 1, 2019. Commentary gives RAND researchers a platform to convey insights based on their professional expertise and often on their peer-reviewed research and analysis.