What Strategies Are the Best Defence Against Antisocial Behaviour at Football Events? 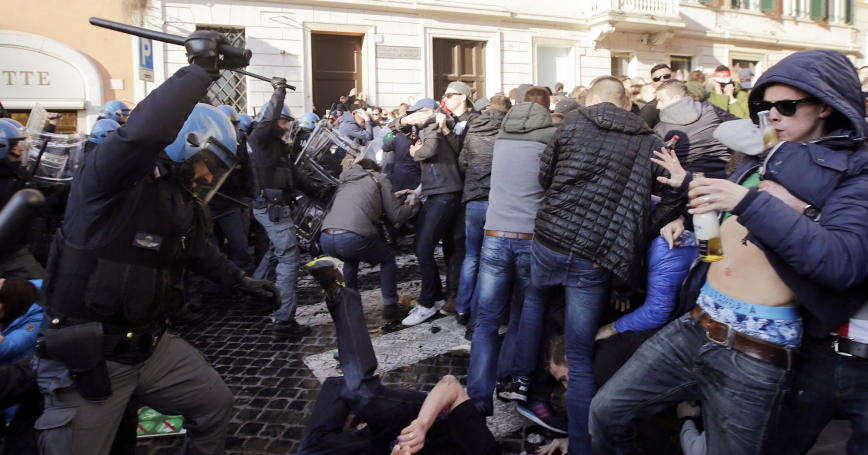 Feyenoord fans clash with police at the Spanish Steps prior to the start of the Europa League soccer match between Roma and Feyenoord in Rome, Italy, February 19, 2015

Ahead of February 2019's Europa League match between Sevilla and Lazio, serious violence broke out in a bar in central Rome full of football fans. Forty people were involved in the clash and four people were stabbed, including an American tourist apparently caught up in the melee; witnesses reported seeing hooded men, armed with sticks and belts, targeting Sevilla fans.

The incident served as a reminder, if one were necessary, that football-related violence and disorder is far from a thing of the past. A quick survey of the past year reveals how widespread the issue remains.

In Argentina, the second leg of the Copa Libertadores final between Boca Juniors and River Plate in November 2018 was postponed after Boca's team coach was attacked by rival fans en route to the match.

In the same month, serious disorder broke out between Ajax and AEK Athens supporters in Greece, with a Molotov cocktail thrown and several firecrackers set off during the match; in central Athens, petrol bombs were flung at rival supporters and police.

And in August, Red Star Belgrade's match against RB Salzburg was marred by a pitch invasion and the setting off of fireworks.

The harm from these incidents extends not only to the physical injuries and trauma that those directly involved experience, but the much wider ripple effect that deters peaceful fans from attending matches or deprives them of the opportunity to safely enjoy it.

Preventing and effectively responding to violent and antisocial behaviour should be the highest priority for those engaged in hosting and managing football events. But what do we know about the strategies that work?

RAND Europe recently completed a major study into football-related violence and disorder, examining the available research into the prevalence, nature and causes of these behaviours, and identifying the promising practices to prevent and respond to these incidents.

This study, the first of its kind, found a key evidence gap on the prevalence of the problem. While physical assaults, the throwing of projectiles and pyrotechnics, vandalism and verbal abuse at football matches have all been documented, there is little publically available information about how common or severe these incidents are.

No single factor can be found responsible for violent or antisocial behaviour by fans at football events. Instead, multiple factors are often simultaneously in play.

Little more is understood about the drivers of these behaviours. The available evidence suggests that alcohol consumption, team rivalries and thrill-seeking can all play a role, as well as situational and spatial factors, such as the ease of movement within a venue. However, no single factor can be found responsible for violent or antisocial behaviour by fans at football events. Instead, multiple factors are often simultaneously in play.

Our research identified a number of promising practices for preventing and tackling violent and antisocial behaviour. In terms of policing interventions, intelligence-led policing and low-intensity approaches that seek to build cooperation with fans through mutually respectful dialogue appear promising, as does the deployment of mounted police.

For example, experts interviewed for an early review of safety management at the 2018 World Cup in Russia said that international police cooperation and measured policing tactics helped to ensure a largely trouble-free tournament.

The Russian authorities organised a heavy police presence in host cities during the event, but the police generally adopted a relatively tolerant approach towards fans.

Two interviewees, as well as media reports, also noted the effectiveness of international coordination among relevant stakeholders in the run-up to the event, as well as liaison support from foreign police representatives on the ground.

There is also some evidence in favour of strategies related to how the venue is organised, such as the use of CCTV cameras, segregating fans and in-stadium alcohol restrictions.

Other promising practices relate to how a specific event is organised, including mandatory fan transport to stadiums, the application of banning orders and the use of volunteers to engage with attendees.

Researchers found that having friendly, level-headed volunteers at large sporting events may aid public safety and encourage positive spectator behaviour. Advice given to spectators in a manner that is likely to be well-received can ease confusion and anxiety among visitors, and volunteers can monitor and provide feedback on crowd behaviour and concerns to event organisers in real time.

While these strategies lack conclusive proof of effectiveness, due to the lack of previous robust evaluation, they represent a good starting point for authorities managing football events.

Football-related violence is not going away. It is therefore more important than ever that police and football authorities have evidence on what strategies work and that they share best practices with each other. We hope that our work, the first strategic study into this issue, makes an important contribution to this field, and is used as a jumping off point for practitioners and researchers in this emerging area of research.

Lucy Strang is a senior analyst with RAND Europe, focusing on communities, safety and justice research.

This commentary originally appeared on Policing Insight on March 17, 2019. Commentary gives RAND researchers a platform to convey insights based on their professional expertise and often on their peer-reviewed research and analysis.