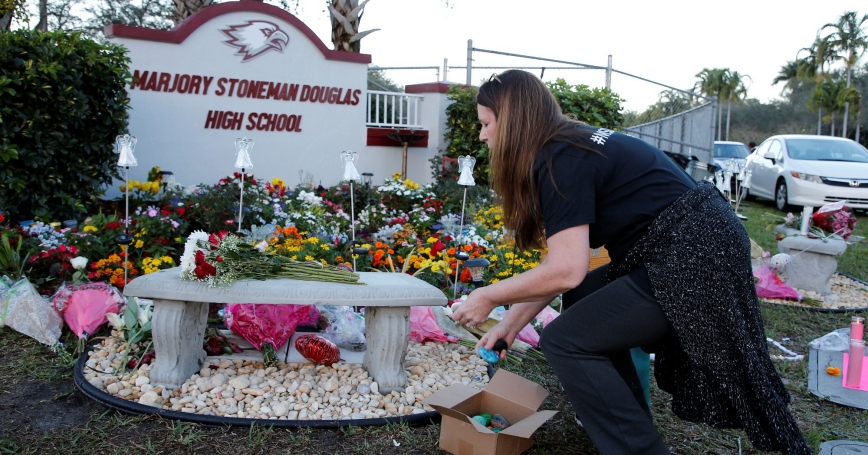 Suzanne Devine Clark at a memorial on the one year anniversary of the shooting at Marjory Stoneman Douglas High School in Parkland, Florida, February 14, 2019

Since 2013, only one full week has passed without a mass shooting—in which four or more people are shot—in the United States.

The trauma associated with such gun violence often extends far beyond the initial tragedy. Three recent suicides linked to mass shootings at two schools have called attention to this point.

In late March, the father of a victim of the Sandy Hook Elementary mass shooting in 2012 and two survivors of last year's massacre at Marjory Stoneman Douglas High died, all by suicide.

Mental health needs for a significant minority of [mass shooting] survivors continue for months or even years.

Initial screening and counseling are common after a shooting, support that is critical but not sufficient. Federal crisis counseling grants focus on the nine months following a disaster, but research shows that the mental health needs for a significant minority of survivors continue for months or even years. Estimates vary widely on the numbers of people who do not recover on their own, depending on the type of trauma and the degree of exposure to it.

Research on adolescent disaster survivors has shown that post-traumatic stress disorder follows a complex course and symptoms can be delayed or return years after an event. Anniversaries of traumatic events can also trigger symptoms.

It cannot be said enough: Many suicides are preventable.

If society wants to prevent suicide, then those known to be at risk need better care and more individuals at-risk need to be identified so they could benefit from suicide-prevention services. In addition, safer environments could be created (PDF) by having mental health professionals and doctors work with at-risk individuals to make a safety plan to temporarily remove guns and other means (such as drugs) that people might use to die by suicide.

Nearly one of every three people who die by suicide are already receiving care from a mental health professional or their regular doctor. Ensuring that care providers are identifying and using practices proven to prevent suicide with those at-risk is vitally important.

Identifying those at risk and getting them the proper care is also key for those not already receiving care. Media campaigns are frequently used to communicate the risk factors and warning signs that someone may be at-risk for suicide and need care—in an effort to reach family or friends who can reach out and encourage those at-risk to get help. The National Suicide Prevention Lifeline also has a comprehensive list of risk factors and warning signs and offers immediate crisis counseling to everyone who may need it.

Fortunately, there are proven treatments for the types of problems commonly experienced following trauma exposure, such as post-traumatic stress symptoms, anxiety and depressive symptoms. Medication and short-term talk therapy models that incorporate a variety of techniques, including coping strategies, changing unhelpful ways of thinking or acting, and improving emotional regulation, can help reduce symptoms and enhance recovery.

The majority of gun-related deaths in the United States are suicides. Policy changes could be one way to address this.

More could also be done to create safe environments that make it harder for people to die by suicide. The majority of gun-related deaths in the United States are suicides. Policy changes could be one way to address this—one example would be putting extreme-risk protection orders in place that allow family members or police to petition for temporary removal of firearms from at-risk individuals. Other practices that could contribute to safer environments include having doctors and mental healthcare providers talk with parents about gun safety or make a plan to temporarily remove a gun from the home of an at-risk person.

The need for mental health support and suicide-prevention efforts targeting survivors of mass shootings, and the friends and families of victims, is great. Putting such programs in place could go a long way toward helping them heal—and preventing more tragedy.