The U.S. Designated the Revolutionary Guards as a Terrorist Group. What Happens Next? 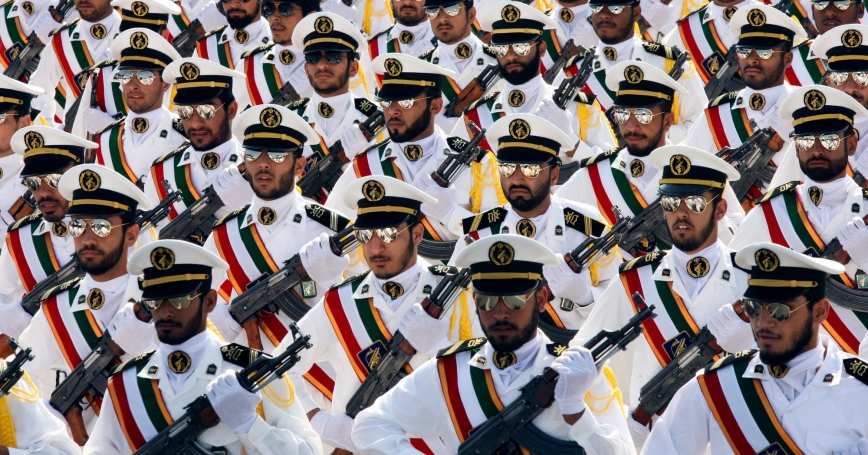 Members of the Iranian Revolutionary Guard Navy march during a parade in Tehran, Iran, September 22, 2011

On Monday, in an unprecedented move, U.S. President Donald Trump's administration designated Iran's Islamic Revolutionary Guard Corps (IRGC) as a foreign terrorist organization. The decision wasn't entirely unjustified: The IRGC creates, trains, funds, arms, and deploys forces with thousands of fighters beyond Iran's borders. These include local insurgents but also terrorist groups, such as Hezbollah. IRGC-backed forces are responsible for the deaths of hundreds of U.S. service members.

The Trump administration's decision was meant to serve U.S. interests by isolating Iran. It seems not to have considered, however, the many ways that the regime can retaliate.

Official statements by the Iranian government already yield clues that Tehran is preparing to interpret the designation as an attack and to respond accordingly. Mere hours after the U.S. announcement, Tehran responded by similarly designating U.S. Central Command—the combatant command responsible for theaters across the Middle East, South Asia, and the Horn of Africa—as a terrorist organization. Mohammad Ali Jafari, the IRGC's commander in chief, said the U.S. Army in the region would “not enjoy today's peace.” The implication was clear: The Guards would begin to target U.S. military personnel.

Tehran is preparing to interpret the U.S. designation of the IRGC as an attack and to respond accordingly.

This would not be a new posture for Iran. It is well-known that Iran supplied the materials for explosively formed penetrators, an armor-piercing form of improvised explosive device favored by Iraqi Shiite militias during battles against U.S. troops at the height of the conflict in Iraq, between 2006 and 2010. The United States holds Iran responsible for the deaths of more than 600 American soldiers in Iraq.

If Iran now seeks to respond to the designation by escalating tensions against the U.S. military, it has several options. It can choose to focus either on areas where the IRGC already has a direct presence or in places where Iran's nonstate clients have influence. Although the United States has decreased its troop levels in Syria, Iran still maintains a robust presence there, supporting Lebanese Hezbollah units in the country and commanding a vast Shiite foreign fighter network that could be used to attack U.S. troops directly or indirectly. In Iraq—where the United States still has approximately 5,200 troops—Tehran enjoys the loyalty of several prominent Shiite militias, including Kataib Hezbollah, Asaib Ahl al-Haq, and the Badr Organization.

The Guards could also begin targeting American civilians abroad, either directly or by working through a proxy group. IRGC-linked individuals and outlets have already pointed to U.S. contractors and members of the intelligence community working in the region as possible targets. Hezbollah is a prime candidate for perpetrating such attacks, which could include kidnapping or direct attacks on U.S infrastructure and personnel. On Wednesday, Hezbollah leader Hassan Nasrallah reminded the United States of his organization's capabilities and suggested that it would not stand by on the sidelines as U.S. actions grew more aggressive in the region. Hezbollah is capable of following through on its threats, as it maintains a vast global infrastructure and has been responsible for attacks in Argentina and Bulgaria, while attacks have been thwarted in locales as diverse as Cyprus, Kenya, India, Thailand, and Georgia.

Iran could also stage an attack using IRGC cyberwarfare units, which have previously targeted U.S. persons, financial companies, and public infrastructure. Unlike other nations that possess sophisticated technical capabilities, Iran's cyberactivities focus less on espionage and more on offensive operations within the networks of its adversaries. In March 2016, the United States indicted several Iranian citizens who were alleged to be working as hackers for the IRGC and Iranian government. These individuals were accused of launching cyberattacks on the New York Stock Exchange, Nasdaq, and several banks and financial institutions, as well as the Bowman Avenue Dam in Rye Brook, New York, where hackers gained unauthorized remote access to a computer controlling the dam.

Aside from military attacks, the United States may also suffer diplomatic fallout from Iran's designation of U.S. Central Command as a terrorist group. What once would have been a minor misunderstanding between the two adversaries could very well become a tripwire for increased friction. Iran has already threatened to act against U.S. vessels in the Persian Gulf—the Iranian coasts of which have largely been the IRGC's responsibility to patrol. If a situation arises similar to the one in 2016, when Revolutionary Guards captured American sailors in the gulf, Washington will not have the formal and informal channels of communication it had then to get the sailors released. Instead, the Iranians may hold Americans hostage for extended periods of time or even harm them. Similarly, although the conventional Iranian military, not the IRGC, is mostly responsible for the country's activities in the Bab el-Mandeb strait, the Gulf of Aden, and Gulf of Oman with a mission largely focused on anti-piracy, it could use its position to further provoke the United States.

As mutual threats lose ground in the region, the United States and Iran are entering a new era of competition in key strategic theaters.

Even if Iran doesn't instigate such a situation, contact between the U.S. and Iranian militaries is nearly unavoidable. As mutual threats, such as the Islamic State, lose ground in the region, the United States and Iran are entering a new era of competition in key strategic theaters—including Afghanistan and Iraq. Iran's steadily increasing leverage in Iraq and Syria, and its growing network of proxies in Lebanon, Bahrain, and Yemen, means that the Trump administration cannot simply wish the Iranians away. Washington must find a way to come to terms with Iran on critical geopolitical issues—reconstruction in Syria, the continued campaign against Islamic State remnants, keeping Afghanistan from descending into chaos, and forging political reconciliation in Iraq between Sunnis and Shiites.

What the United States has done instead is increase the likelihood of a tit-for-tat escalation with Tehran—one that requires significant diplomatic resources to avoid resulting in a broader regional conflagration that includes Israel and the Gulf states and produces chaos throughout the region.

Colin P. Clarke is a senior fellow at The Soufan Center and an adjunct senior political scientist at the RAND Corporation. Ariane M. Tabatabai is an associate political scientist at the RAND Corporation. She is the co-author of “Triple Axis: Iran's Relations With Russia and China“ and the author of “No Conquest, No Defeat: Iran's National Security Strategy.“

This commentary originally appeared on Foreign Policy on April 11, 2019. Commentary gives RAND researchers a platform to convey insights based on their professional expertise and often on their peer-reviewed research and analysis.