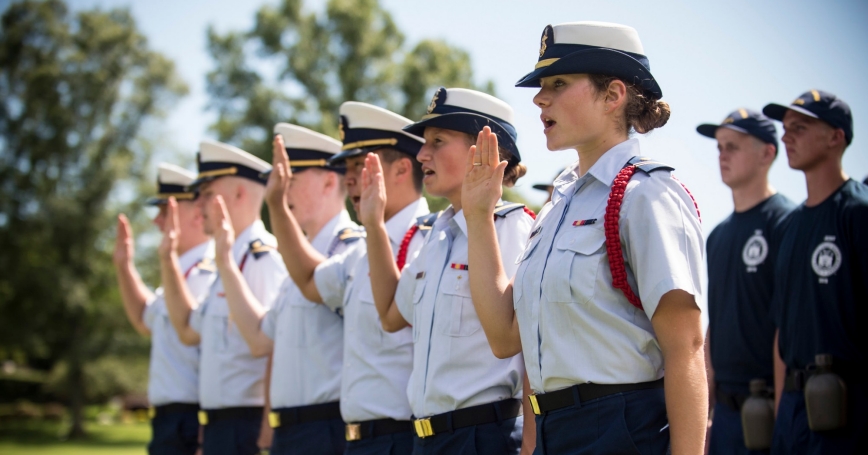 As a graduate of the last all-male Coast Guard Academy class and the son of a service mom who opposed women in the military, I might seem to be a ripe pick to be a social dinosaur, eager to resist efforts to bring on and keep more women in the service that safeguards U.S. interests on the seas.

Far from it. I've commanded or served as executive officer on vessels with all-male and mixed-gender crews. It isn't easy and can be complex to have forces inclusive of women and members of underrepresented groups.

That said, I'd take mixed-gender crews going away, because I've seen for decades from the front lines, as well as from leadership posts, what dedicated and capable Coast Guard women do.

I've seen them operating on the frigid Bering Sea in winter, with hurricane-force winds gusting and 40-foot waves crashing around them, laboring side-by-side with male colleagues in multiple ocean rescues. I've watched the female lead of a Coast Guard boarding party back down a 6-foot-7, 400-pound, surly, mouthy suspect and cuff him to a boat rail after he thought he could intimidate her from her maritime law enforcement role. I've been proud to help prepare and support the Coast Guard women who have excelled at shipboard operations and support in a combat zone in Southwest Asia, in intelligence, cybersecurity, and other intense and complex assignments around the globe.

In my experience, with both sexes throughout the ranks, much-needed candor, directness, and order abound in ways they might not when units are packed only with good but rambunctious young men. The Coast Guard benefits from the heightened respect that I've seen colleagues show each other in mixed-gender units, giving personnel greater opportunity to focus and excel at their tasks at hand.

Obstacles persist to gender equity and equality in the Coast Guard. Traditions, born of centuries of warfare by men, die hard. Keeping in mind the basic military idea that newcomers start equal but at the bottom, working their way up over a career with excellence and accomplishment, perhaps now is the time to revisit the fundamentals of how we select, train, and retain our Coast Guard members, as highlighted by the challenges of women in the service.

The Coast Guard benefits from the heightened respect that colleagues show each other in mixed-gender units, giving personnel greater opportunity to focus and excel.

Coast Guard leadership had the courage to enlist RAND researchers to tackle the challenge of retaining women in the service. They found that women had issues with their fair treatment and prospects for advancement, worrying as well about sexual harassment and sexual assault while serving in the Coast Guard. Full disclosure: I reviewed the study, but did not participate in the research.

When the Coast Guard zeroes in on evidence-based and appropriate accommodations for women (including berthing aboard ships, operational equipment and uniforms) and their physical capacities, as well as with child-bearing, child-rearing, and family life, it will benefit everyone in uniform. We're not giving special breaks to select groups in examining human capacities, we're finding how individuals can excel and bring new and needed skills to our missions. Rising generations are emphatic about the importance of work-life balance, and it benefits the services when military personnel enjoy rewarding home lives with minimal domestic worries.

The Coast Guard may be in measurable terms slightly ahead of its military peers and advanced in its inclusionary efforts when compared to many corporations with similar workforce dynamics. Still, this service is determined to stay at the fore and be pushed forward even more by its capable leaders and broader societal changes to reconcile the tough demands of active duty with the real and specific needs of individuals in unique groups with demonstrated talents.

I'm a retired vice admiral now. It was my privilege for decades, at sea and on shore, to tell those I led that I insisted simply that they give themselves 100 percent to their duties with honor, ensure leaders were aware when they were not 100 percent so they could reconcile that or alter expectations, and then go home with pride and give 100 percent to their loved ones.

The Coast Guard can and should reasonably ask for unwavering commitment from its people, if it returns it—to them all. The U.S. military, history teaches, played a model role in advancing civil rights and striking down racial discrimination. We need to step up to that tradition anew, bringing in, keeping, and raising up all the able and dedicated women and men in the Coast Guard, because it's the good and right thing to do.

Retired USCG Vice Adm. Robert C. Parker is an adjunct international and defense researcher at the the nonprofit and nonpartisan RAND Corporation. He was commander of the Coast Guard Atlantic Area from April 2010 to May 2014, with operations responsibility from the Rocky Mountains to the Arabian Gulf. He commanded three Coast Guard cutters in the Pacific, Gulf of Alaska, Bering Sea, North Atlantic and Caribbean and Gulf of Mexico.

This commentary originally appeared on Boston Herald on April 17, 2019. Commentary gives RAND researchers a platform to convey insights based on their professional expertise and often on their peer-reviewed research and analysis.