Baghdadi Resurfaces: What It Means for ISIS's Global Terror Campaign 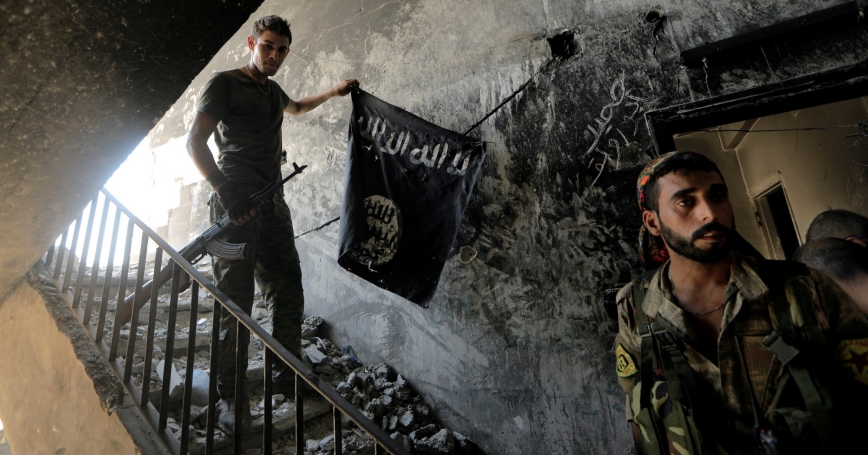 Members of the Syrian Democratic Forces with a captured ISIS flag in Raqqa, Syria, August 14, 2017

Since the Islamic State lost its last piece of territory in Syria in late March, some military analysts have been proclaiming the ultimate defeat of the terrorist group. But with last week's release of a video of Abu Bakr Baghdadi, ISIS showed that it's still got some life left—literally.

By appearing on camera, the reclusive leader of the Islamic State put to rest any murmurings that he had been killed in the battle to crush ISIS' so-called caliphate in Iraq and Syria. It was his first video appearance in almost five years, offering much-needed proof of life to the group's surviving members and supporters, since many probably questioned whether their leader was dead or alive.

At a time when ISIS desperately needs a morale boost, the resurfacing of Baghdadi will almost certainly affect the group's resurgence in a way that directly benefits the organization.

At a time when ISIS desperately needs a morale boost, the resurfacing of Baghdadi will almost certainly affect the group's resurgence in a way that directly benefits the organization.

The video could also prove a boon to ISIS propaganda efforts as the group seeks to maximize its effect. Baghdadi's mere appearance on camera could boost ISIS manpower, especially vis-à-vis its ongoing competition with Al Qaeda for new recruits, a struggle playing out in failed states and conflict zones throughout the world, but especially in certain hot spots in regions like North Africa and South Asia.

The video message also has implications for ISIS' global reach. During his speech, Baghdadi accepted bayat, or a pledge of loyalty, from franchise groups in West Africa's Burkina Faso and Mali. Africa is fertile ground for the expansion of the Islamic State, especially as fighters who survived the collapse of the caliphate seek new battlefields. Governments and militaries in sub-Saharan Africa lack the capabilities to track, monitor and surveil national borders in the same way that European countries can, making them more vulnerable to an influx of jihadists fleeing Iraq and Syria.

In the 18-minute video, Baghdadi also made a point to allude to the ISIS affiliate in Afghanistan, ISIS-Khorasan Province, which has gained significant momentum over the past several years while launching spectacular terrorist attacks against the Afghan government. Propaganda videos are a not-so-subtle way of recruiting new members, and Baghdadi went out of his way to lavish praise on ISIS fighters from France, Australia, Belgium and Chechnya, emphasizing the transnational nature of the organization.

A key theme in Baghdadi's speech was the need for ISIS militants and supporters to continue fighting and to reinforce affiliate groups while expanding the organization's overall footprint. From the caliphate's earliest days, Baghdadi and other ISIS leaders were aware that the group would never be able to withstand the onslaught from Western and coalition military forces. Accordingly, Baghdadi has sought to lay the groundwork for a guerrilla insurgency in Iraq and Syria, hoarding resources, including weapons and money, while moving from conventional military operations to more asymmetric tactics, such as ambushes and hit-and-run attacks.

The Islamic State leader also referenced the Easter Sunday bombings that killed more than 250 in Sri Lanka and may prove to be a model for future ISIS plots. ISIS could partner with local and lesser-known jihadist groups to launch attacks in countries where sectarian tensions are high and security forces are weak, such as Sri Lanka. Authorities recently discovered that at least one of the suicide bombers in Sri Lanka was trained by ISIS in Syria. That is incredibly foreboding given the hundreds or thousands of foreign fighters who may be fleeing the region and attempting to head back to their home countries or who end up in third countries.

The choice of Sri Lanka as the target of such a high-level terrorist attack is worrying on several levels. Since no high-profile jihadist groups were operating in Sri Lanka, few terrorism analysts or counterterrorism officials believed that the country was prone to jihadist violence—causing them to wonder what other countries ISIS might infiltrate.

Tens of thousands of foreign fighters from as many as 110 countries traveled to the Middle East to join ISIS. The contingent from Sri Lanka was relatively small, somewhere between 30 and 50, by most accounts. One concern is whether the attacks in Sri Lanka will serve as the opening wave of terrorism perpetrated by returning foreign fighters trained and deployed by ISIS, and who may be lying in wait to strike.

The Islamic State does not need territory to survive and even thrive.

The most important message to take away from the Baghdadi video may be that the Islamic State does not need territory to survive and even thrive. By expanding throughout the world and continuing to fight while spreading its message, Baghdadi is attempting to persuade his followers that the loss of the caliphate is only a temporary setback—one that ISIS will ultimately overcome.

Colin P. Clarke is an adjunct senior political scientist at the nonprofit, nonpartisan RAND Corporation. and a senior research fellow at the Soufan Center.

This commentary originally appeared on Los Angeles Times on May 6, 2019. Commentary gives RAND researchers a platform to convey insights based on their professional expertise and often on their peer-reviewed research and analysis.