Can Anyone Save the Iran Nuclear Deal Now? 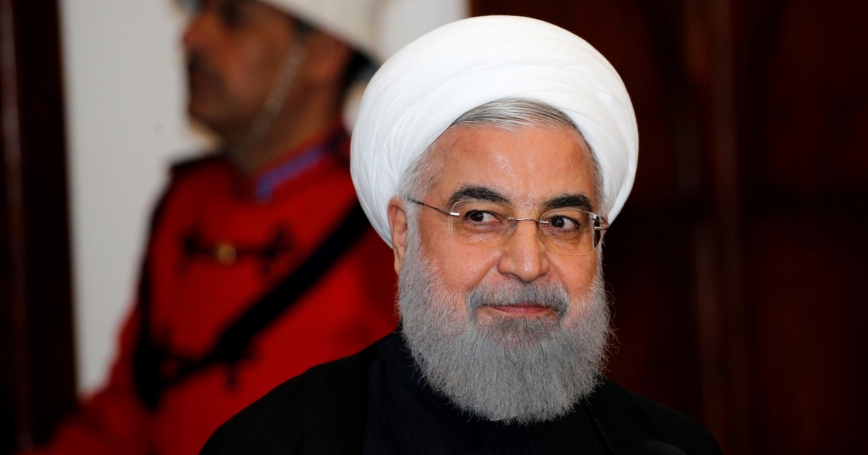 In the year since the United States withdrew from the nuclear agreement with Iran, that country has practiced what its president, Hassan Rouhani, has described as “strategic patience.” But now Iran seems to be giving up on that.

On Wednesday, Mr. Rouhani announced that Iran would stop adhering to some of the deal's provisions. Iran's goal, though, is not to find a quick exit—or any exit at all—from the deal, but to signal to the European countries that also signed it that they can no longer sit by as the United States imposes sanctions and more generally piles pressure on Tehran.

The nuclear deal is, like most international agreements, far from perfect, but the rest of the parties to it—and most countries in the world—see it as critical to regional stability and international security, which is why they have tried to keep it alive in the face of the Trump administration's efforts to destroy it.

Mr. Rouhani is sending Europe a clear signal: If Iran doesn't get any benefits from its participation in the agreement, neither will Europe. That's why he announced Iran will hold on to its excess enriched uranium and heavy water—both of which could potentially be used in building nuclear weapons—rather than sell them to other countries, as is required by the agreement. He is also giving the Europeans 60 days to take steps to help Iran's economy, which has been crippled by the American sanctions. If he doesn't get those things, he says, his country will take additional steps that violate the deal and eventually pull out altogether.

Most countries see the Iran deal as critical to stability and security. That's why they have tried to keep it alive in the face of U.S. efforts to destroy it.

So can Europe save the Iran deal?

Politicians and policymakers from Brussels to London to Berlin want to, but it won't be easy. Europe is boxed in. Over the past year, the Trump administration has reinstituted sanctions that had been lifted under the agreement and imposed new ones. If the Europeans defy those sanctions, they face the wrath of the world's largest economy and could lose access to American markets. But if they stop doing business with Iran, Tehran will lose any incentive to stay in the agreement—an agreement that Europe views as vital to its interests.

But there might be a way out. Mr. Rouhani's statement on Wednesday made clear that he doesn't expect Europe to cure all of his country's economic woes. Instead, he specifically noted that he wants the Europeans to “return to the negotiating table” and devise a clear path for continuing the deal without the Americans. Although Mr. Rouhani wasn't specific, he said that he'd be looking for negotiations rather than any particular absolute outcome by the 60-day deadline.

This means that Europe could take small but symbolically important steps to signal to the Iranians that it is committed to maintaining the nuclear deal. Iran is specifically looking for help from Europe in overcoming the restrictions the United States has placed on Iranian banking and getting Iran's oil back on the international market.

So what can Europe do? First, it could finally make operational a new financial mechanism that is supposed to allow European companies to send exports to Iran without running afoul of American sanctions. Although the scope of the mechanism is likely to be limited at first, focusing mostly on humanitarian goods such as food and medicine, its creation would extend an important economic lifeline to Iran and indicate a willingness to cooperate. The arrival of such goods would also demonstrate to the Iranian public that the West isn't intent on simply pressuring it without an end in sight.

The United States has warned that the mechanism may not meet international norms on money laundering and that it could lead to sanctions on those who use it. But Europe is hoping to—and can—overcome this by pushing the Iranians over the next 60 days to meet international standards.

The Europeans could also redouble efforts to prevent escalation between the United States and Iran. In the absence of channels of communication between Tehran and Washington, any miscommunication or miscalculation could aggravate a volatile situation and increase the risk of confrontation.

If the deal falls through, it will increase the risk of American military action to curb Iran's nuclear program.

The European signatories have an important factor in their favor: Tehran also doesn't want to see the deal's collapse. The agreement is President Rouhani's signature achievement—in fact, the only thing he's truly accomplished in his time in office. He wants his legacy to be his country's reintegration into the global economy, which the deal was supposed to bring about.

Unfortunately, he's under much pressure at home. The other crucial audience for Iran's announcement on Wednesday, in addition to Europe, was the Iranian people and, specifically, the critics who have been frustrated at what they viewed as Mr. Rouhani's impotence when confronted with American belligerence and European helplessness over the past year.

Now that he's sent a strong message to Europe, Mr. Rouhani may be able to buy some time with his domestic critics. Iran's supreme leader, Ayatollah Ali Khamenei, also wants to sustain the deal at least until November 2020, when it will become clear whether the Trump administration and its Iran policy will remain in place for four more years.

Europe faces mounting pressure from Washington and now Tehran to choose a side. If it follows the Americans' lead, the bloc risks torpedoing a deal that it sees as key to its security and its economic interests. If it gives in to Iran, it could alienate the world's largest economy and its chief security guarantor. It won't be easy to walk this thin line, but the stakes are high: If the deal falls through, it will increase the risk of American military action to curb Iran's nuclear program.

Ariane Tabatabai is a political scientist at the RAND Corporation and a co-author of “Triple Axis: Iran's Relations with Russia and China.”

This commentary originally appeared on New York Times on May 10, 2019. Commentary gives RAND researchers a platform to convey insights based on their professional expertise and often on their peer-reviewed research and analysis.