The End of May: Another Brexit Victim 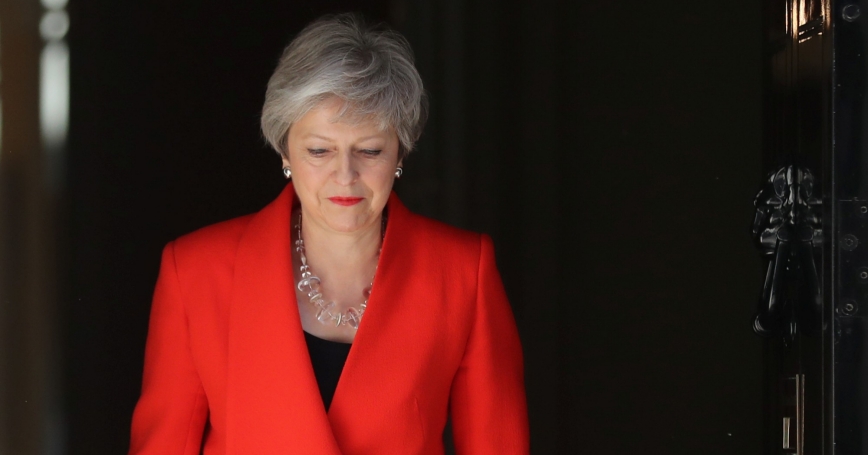 British Prime Minister Theresa May prepares to announce her resignation in London, May 24, 2019

Theresa May finally concluded there was no alternative and has announced her intention to resign as prime minister, as soon as June 7. She thus becomes the fourth Tory prime minister to lose the job in 30 years, each essentially because of the party's corrosive internal differences over Europe. Margaret Thatcher, John Major, and David Cameron are her predecessors in this respect.

Why has it happened, and what will come next in the long-running reality show that Brexit has become?

First, Brexit advocates did not expect to win the 2016 referendum. Surprised by the win, and without the support of the government's policy apparatus, EU-Leavers never resolved basic contradictions in their argument for leaving. When, in the summer of 2016, the newly empowered May government started trying to make “Brexit mean Brexit,” these contradictions were not tackled.

The “Leavers” had two mutually contradictory impulses: On the one hand, anti-immigration, nativist, and anti-globalization arguments that are similar to what one hears in the United States; on the other hand, a vision of Britain as the “Singapore of the Atlantic,” freed of the EU's trade policy shackles and much more able in world trading markets. Leavers, bowing to the first impulse, insisted on stopping free movement, making a “Norway” single-market solution untenable. For those subscribing to the second impulse, trade-policy independence was the supreme goal, which ruled out a customs union and immediately put at risk the Good Friday solution in Northern Ireland.

If Leavers had been all on one side or the other, or had thought through the issues before the referendum, it might have gone more smoothly. And pervasive London tabloid exaggerations of what the EU was all about made serious policy discussions that much tougher.

Second, and in part as a result of these contradictions, the negotiations process was messy on the British side. From the outset, May decided that she had to keep the Tory Leavers on-side for the sake of party unity. That drove the early request to leave under the EU Treaty's Article 50 (PDF)—before the nation knew what it wanted, or how to get it—and threw away much British leverage.

There was no evidence in that first year that the UK understood what a problem it would be to keep the Irish border barrier-free after Brexit to protect the Good Friday peace agreement. London didn't establish an early, cooperative problem-solving approach with Dublin, even though the two countries had a problem in common to solve. But in any case, Dublin cannily put all its chips on Brussels to serve its interests.

In London, there was rapid turnover in key ministries, and the government sidelined the Foreign Office while creating two new ministries, one for negotiations with the EU and one for negotiations with third countries. Britain has a strong cadre of Europeanists, and a tradition of success in working in Brussels. Yet May made no use of her retired mandarins. She even forced out the UK's ambassador to the EU when he made inconvenient—though accurate—observations. Britain was at a disadvantage on the field, even though Whitehall had all-stars on the bench.

Third, and by contrast, the EU's management of the Brexit process was exceptionally good. The selection of Michel Barnier as lead negotiator was inspired. He had experience as a commissioner, deep understanding of Brussels, and an instinct for managing member states. He recognized right away that the EU27's biggest challenge would be staying unified, given the wide range of interests.

Barnier imposed a “no dialogue until you file Article 50 notice,” then insisted on settlement of withdrawal terms before any discussion of future relations. Both of those demands had no clear basis in the treaty, but served to keep the EU together and put the UK at a disadvantage.

The UK was so conflicted and disorganized, and May was so under pressure by the hard-core Leavers, that it didn't even fight these early battles. In a RAND study, we found that the EU knew from the outset it was playing a “zero-sum game” in which it could only win if the UK could be seen to be losing. The UK wasn't sure initially what game it was playing, or against whom.

Fourth, May's political judgments and instincts were poor, which aggravated the UK's difficulties. The decision to call a snap election in the summer of 2017, after denying any such intention, was her worst decision. May proved a less-than-stellar campaigner and, despite going into the election with public opinion polling in her favor, she lost the Tories' majority, elevated Jeremy Corbyn (in his own eyes and those of the Labour base), and greatly empowered the Democratic Unionist Party (DUP), a right-wing Ulster unionist party that supplied the critical 10 votes to allow May to form a government after the election.

Once the DUP had kingmaker power over May's government, it made sure to block any Irish border solutions that treated Northern Ireland differently from the rest of the UK, which had become May's central dilemma in getting a deal through Parliament.

What happens now? Within the Conservative party, members of Parliament (MPs) will select two finalists for leader, and party members will vote through mail-in ballots. The betting is that the flamboyant former foreign secretary and arch-Brexiteer Boris Johnson will win.

The EU twice has extended the deadline for the UK's departure, to give May time to get the negotiated withdrawal agreement through Parliament, which she failed to do in three tries. That agreement would have extended Britain's time in the EU's customs area and deferred a hard border in Ireland, until Britain could agree on a long-term trade relationship with the EU. The most recent extension ends Oct. 31. Johnson opposed the withdrawal agreement, as did most of those competing to succeed May.

Complicating matters, the Tories are poised to suffer a historic defeat when the results of this week's European Parliament elections are announced in the coming days.

Three outcomes are conceivable. One is that Johnson or another May successor could lead the nation to an economically costly no-deal departure from the EU in November. Alternatively, a new leader could swallow hard and accept the EU's offered withdrawal package. Or, finally, all the other parties in Parliament, plus some Tory MPs who break with the party over Brexit, could bring down the government in a vote of no confidence, leading to a new general election.

What brought down May—the essential contradictions of Brexit, and a British public that cannot muster a majority for any outcome—could similarly handcuff any successor.

This commentary originally appeared on The Hill on May 25, 2019. Commentary gives RAND researchers a platform to convey insights based on their professional expertise and often on their peer-reviewed research and analysis.