U.S., Iran Must Both Tread Lightly with Tensions Running So High 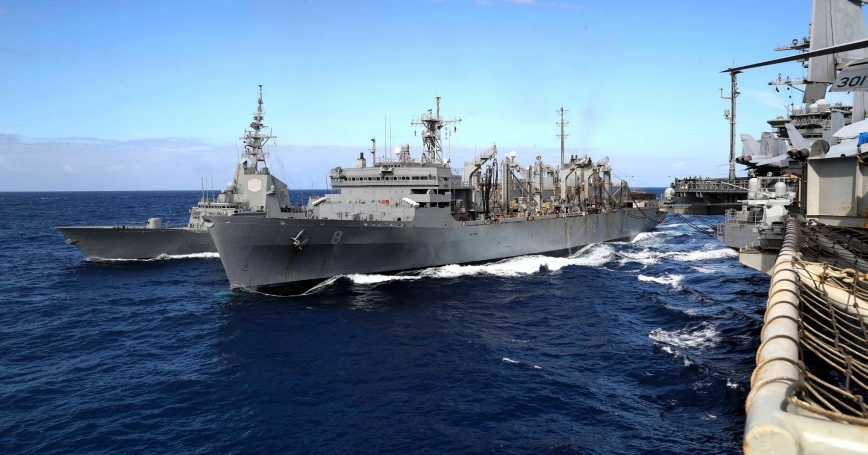 The aircraft carrier USS Abraham Lincoln conducts a replenishment-at-sea operation with other carrier group ships. The carrier group is now in the Red Sea earlier than planned at the direction of the White House

In recent weeks, tensions between the United States and Iran have increased rapidly, raising concerns that Washington may be headed for a new war in the Middle East.

Over the weekend, the United States rerouted a carrier strike group and deployed a bomber task force to the Middle East with the stated objective of deterring the Islamic Republic and its proxies from striking U.S. interests or those of its partners.

On Wednesday, Iran's President Hassan Rouhani announced that his country would no longer see itself bound by some provisions of the nuclear deal that the Trump administration withdrew from a year ago.

The recent U.S. measures aimed at deterring Iran are designed to dial up pressure on the regime to persuade Iran to change its behavior either by bringing it back to the negotiating table to strike a “big for big” deal or usher in regime collapse domestically.

For its part, Iran likely hopes to wait out the Trump administration with its main objective probably to keep afloat for now and flex its muscles to deter Washington and undermine it in the region.

Despite increased tensions, both capitals overwhelmingly want to avoid an all-out war. But even so, there are a number of complicating factors that could lead to escalation.

The United States currently operates in close proximity in several theaters (particularly Afghanistan, Iraq and Syria) and areas (namely, the Persian Gulf). U.S. forces remain present on the ground in countries where Tehran has built an extensive presence by working through non-state clients.

However, the two countries no longer have formal channels of communication or an off-ramp to de-escalate tensions. As a result, the slightest miscalculation or misunderstanding can quickly spiral.

In the past, such channels have been vital to the management of complicated matters. For example, in 2016, when U.S. sailors entered Iranian waters by mistake, leading to their capture by Iran's paramilitary Islamic Revolutionary Guard Corps, channels of communication between Washington and Tehran secured their quick release.

Today, no such channel is available and a similar incident could add more tensions and lead to escalation between the two nations.

The recent augmentation of U.S. military assets and capabilities in the gulf may also increase the chances of miscalculation. In addition to the carrier strike group and bomber task force, a squadron of F-35 fighters recently deployed to Al Dhafra Air Base in the United Arab Emirates.

Iran may view the change in U.S. posture and uptick in U.S. capability as offensive in nature. Such misperception could raise the risk of escalation, as Iran might feel compelled to take steps in response to stave off what it sees as a threat.

Moreover, the statement over the weekend stressed that any attack by Iran or its proxies on U.S. interests or those of its allies would be met with a response. This not only sets U.S. red lines but also broadens the aperture of what would beget a U.S. military response.

U.S. forces are still located at Al-Tanf in Syria, in close proximity to Iran and Iran-backed forces. Meanwhile, in Iraq, the Iranian-backed popular mobilization units are no longer working in conjunction with U.S. and Iraqi forces as their common adversary, ISIS, has ostensibly been defeated.

Given the lack of a shared enemy and the proximity of U.S. forces to Iranian clients, it is not far-fetched to imagine an attack on U.S. troops in either country.

The inclusion of allied interests in the White House statement may also provide additional risks for escalation. In the past, U.S. partners such as Israel and Saudi Arabia have called for the United States to take action against Iran, threatening to “go it alone” when Washington did not agree.

While national security adviser John Bolton's statement may have been intended to reassure nervous partners in the region, it ostensibly makes the U.S. party to any proxy attack on a partner.

This may create a slippery slope whereby the United States is dragged into conflict as proxy attacks on partners—such as Houthi missile attacks on Riyadh in response to the Saudi-led war in Yemen—are not uncommon.

In fact, Iran may use its clients to further flex its muscles in the region not just to deter what they believe to be an aggressive American build-up in their backyard, but also to placate constituents at home.

In the year since the Trump administration withdrew from the nuclear deal, pressure has mounted in Iran forcing the Rouhani government to adopt a harder line in its policy vis-à-vis the United States. As a result, in recent weeks, Iran has started to flex its muscles more as its “strategic patience” has been exacerbated.

While neither Tehran nor Washington may be seeking a conflict, they have taken a number of actions that have made confrontation more, rather than less, likely.

Recent nuclear and regional activities—including the announcement that Tehran would no longer be bound by some terms of the nuclear agreement and reported use of proxies to target American interests in the region—may be the first such actions, leading the two countries down the path of confrontation.

While neither Tehran nor Washington may be seeking a conflict, they have taken a number of actions that have made confrontation more, rather than less, likely by increasing the risks of misperception, miscalculation and misunderstanding.

But conflict is not inevitable. The United States and Iran could seek to re-establish communications channels, as well as look for available off-ramps in order to de-escalate tensions and keep the slightest misstep from spiraling into an all-out conflict.

Ariane M. Tabatabai is an associate political scientist and Becca Wasser is a policy analystat the nonprofit, nonpartisan RAND Corporation.

This commentary originally appeared on The Hill on May 9, 2019. Commentary gives RAND researchers a platform to convey insights based on their professional expertise and often on their peer-reviewed research and analysis.