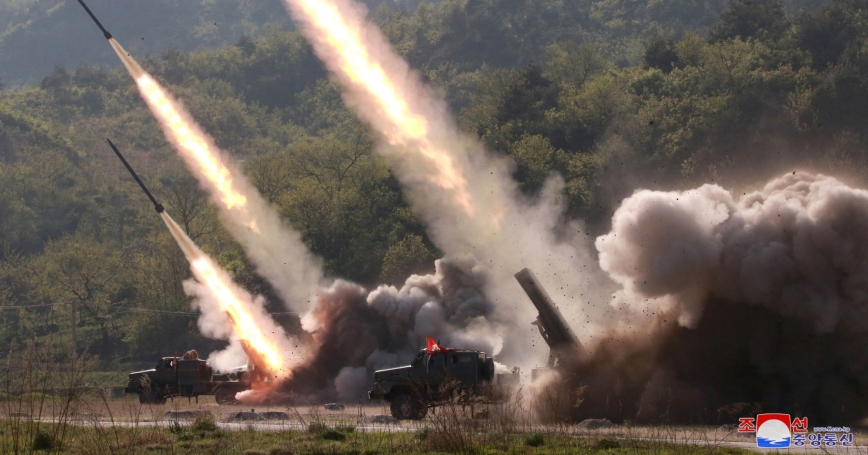 Missiles being launched during a military drill in North Korea, May 10, 2019

This may be intended to indicate U.S. commitment to diplomacy with North Korean leader Kim Jong-un, but it carries significant risks by allowing North Korea to achieve strategic and political gains.

The U.S. president said he was not bothered by the missile tests because they did not violate North Korea's promise to stop testing nuclear weapons or long-range missiles that could reach the U.S. mainland. With this statement, the U.S. president has—intentionally or not—sent a signal to North Korea that it can continue conducting short-range missile tests and keep collecting the data needed to improve such weapons. This is destabilizing for the region.

Allowing these tests to continue gives North Korea the opportunity to perfect the new type of missile that it tested for the first time on May 4th. The missile, which resembles the Russian Iskander short-range ballistic missile, can fly at a low trajectory while changing its flight path. That kind of maneuverability could compromise missile defense systems in South Korea, threatening citizens and U.S. troops there.

North Korea, which has already hinted that it may carry out more weapons tests, might also be tempted to see what more it can get away with before the United States reacts. This could complicate diplomacy—if North Korea returns to testing missiles with longer ranges, the United States might be less willing to return to the negotiating table.

North Korea also might try to exploit differences between the United States and its ally Japan, which are likely to widen if missile tests continue. Unlike Trump, Japan's Prime Minister Shinzo Abe insists that these tests were a violation of U.N. Security Council resolutions. After meeting with Trump in Tokyo in late May, Abe chose to emphasize Japan's solidarity with the United States and said he supported Trump's diplomacy with North Korea. But Abe could face pressure to change that position if North Korea continues testing missiles that threaten Japan.

More broadly, the U.S. silence allows Pyongyang's own narrative about the tests to continue without correction. In state media, North Korea is justifying the missile tests as a defensive drill in response to joint U.S.-South Korea military exercises, as well as a U.S. test launch of an intercontinental ballistic missile in California in May. Pyongyang is also defending the tests by saying that the U.N. Security Council resolutions that ban them are unlawful. Not countering such narratives sends the wrong message to North Korea.

The United States may be avoiding an immediate confrontation with North Korea, but this will do nothing to narrow the gap between the two countries' positions on denuclearization.

The United States may be avoiding an immediate confrontation with North Korea, but this will do nothing to narrow the gap between the two countries' positions on denuclearization. At their summit in Hanoi in February, Trump urged Kim to give up all aspects of his country's nuclear program in exchange for relief from economic sanctions. Kim refused.

It is unclear how much time remains for diplomacy. North Korea has repeatedly signaled that the United States needs to soften its full-and-immediate denuclearization stance if talks are to make progress. Kim has set an end-of-year deadline for that to happen. The missile tests were likely intended to pressure the United States to moderate that position—and perhaps serve as a warning about how tensions would increase should the deadline lapse without progress. Still, Trump maintains that he is in no rush.

Downplaying the missile tests may be a way for the United States to keep the dialogue going. But for North Korea, it is an opportunity to improve an arsenal that already threatens U.S. troops and allies in the region. If North Korea starts testing missiles with a longer range, it could get harder for the United States to return to talks, risking the end of the diplomacy between the two countries that began in 2018.

Naoko Aoki is a Stanton Nuclear Security Fellow at RAND Corporation and a Research Associate at the Center for International and Security Studies at Maryland, the University of Maryland.

This commentary originally appeared on East Asia Forum on June 5, 2019. Commentary gives RAND researchers a platform to convey insights based on their professional expertise and often on their peer-reviewed research and analysis.