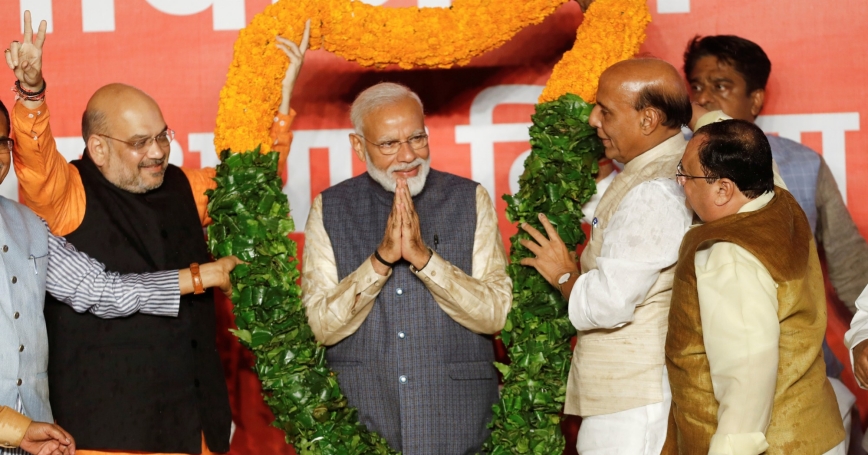 Indian Prime Minister Narendra Modi's spectacular victory in the recent election was a much greater achievement than his equally unexpected victory five years ago.

Back then, he was known as a chief minister who had brought prosperity to his state, Gujarat, while retaining an image of incorruptibility. Voters had supported him in the national election in the hope that he would bring the magic of Gujarat to the rest of the country.

Instead, the past five years have been marked by slowing growth, an agricultural crisis, zero net employment growth, and a decline in small business (caused, in part, by the irrational move to demonetize currency notes that made up over 85 percent of the notes in circulation).

Socially, the country has suffered an unprecedented decline in its cohesiveness during this time, with an accentuation of sectarian divisions, often accompanied by violent acts such as lynchings, and a breakdown of civic life in Kashmir.

Recognizing his weak position before voters on economic and social issues, Modi shifted his campaign entirely to a nationalist plank, arguing that only he could maintain the unity of the country in the face of threats from Pakistan-originated terrorism and homegrown terrorism from Kashmir.

In a campaign that will be remembered for its use of vitriolic slogan-shouting and fake news, Modi's Bharatiya Janata Party (BJP) succeeded in shifting the debate away from social and economic concerns to focus on national unity.

In a sign of change in the Indian voter's psyche, the electorate preferred to buy into Modi's vision over its own woes.

In a sign of change in the Indian voter's psyche from earlier national elections, the electorate preferred to buy into Modi's vision over its own woes. The BJP won overwhelmingly even in states where it lost provincial elections just six months ago.

With a clear majority in Parliament once again, Modi now can return his attention to governance. The economy is likely to be his first priority. In his first term, the government ignored fiscal policy and focused on easy monetary policies to support growth.

Though ineffective, such easy money policies are likely to continue, particularly since inflation is under control. While fiscal policy needs reform, particularly since most effective tax rates have gone up in the past five years, the government's difficult budgetary situation is likely to restrict its hand.

Despite campaigning on a platform of national unity, Modi's government is not well positioned to bring Kashmir into the national polity. The complex legal structure surrounding Kashmir limits what the government can do to move toward greater integration. Thus, it is likely to continue with tough army control over Kashmir in the hope that terrorism will ultimately die down.

In its foreign policy toward big powers, Modi's first term was remarkably like that of his predecessor, Manmohan Singh. Modi's first-term government continued opening to the West, maintained good relations with Russia, and entered into a long thaw in relations with China. This will likely continue.

India's military desperately needs modernization, and Modi will likely continue his policy of shopping for the best deals from the United States and Russia.

Notably for the United States, India will likely continue to keep Russia on as a major arms supplier. India has been historically wary about American reliability as a weapons supplier, an attitude Modi shared during his first term.

India's relations with China, meanwhile, are more complex than with any other country, given their shared border, past conflict, ongoing territorial disputes, military and economic imbalances favoring China, and China's influence over Maoist groups in parts of India and in Nepal.

Over the past decade, and more so during Modi's first term, China has slowly come to look at India less as a South Asian power in relation to Pakistan and more as an emerging pan-Asian power with whom it must deal on more equal terms.

This is seen by Indian policymakers as valuable as it reduces the instability that their complex relationship has otherwise meant. As a result, India-China relations have improved during Modi's first term, and this will likely continue.

Rafiq Dossani is director of the Center for Asia Pacific Policy and a senior economist at the nonprofit, nonpartisan RAND Corporation.

This commentary originally appeared on The Hill on May 31, 2019. Commentary gives RAND researchers a platform to convey insights based on their professional expertise and often on their peer-reviewed research and analysis.