One Year After Singapore: The North Korea Problem Is Bigger Than Nukes 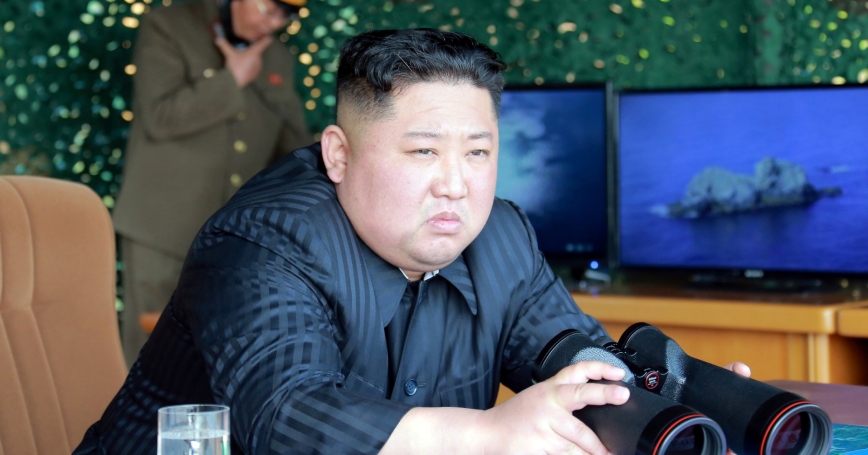 Earlier this month, the Journal of Geophysical Research published a study estimating that North Korea's 2017 nuclear detonation was equivalent to approximately 250 kilotons of TNT, 16 times the size of the Hiroshima bomb. The caveat of uncertainties surrounding the characteristics of the North's nuclear devices, test sites, and geological context aside, the estimate is on the higher end of previous calculations of the Democratic People's Republic of Korea's (DPRK) nuclear test. Had such a bomb been detonated over Washington, it would have knocked down virtually every residential structure downtown and inflicted third-degree burns on everyone within a three-mile radius.

Harrowing, to say the least.

One year after the historic U.S.-North Korea summit that was aimed at determining concrete steps toward Pyongyang's dismantlement of its nuclear weapons program, the Kim Jong Un regime continues to advance and develop its nuclear and ballistic missile capabilities. Just last month, Kim needled the patience of Washington, Seoul, and other allies by conducting two missile tests.

One year after the historic summit, North Korea continues to advance and develop its nuclear and ballistic missile capabilities.

It's instinctive to ask whether substantial progress has been made toward denuclearization. After all, the nuclear issue had been the crux of Washington's, Seoul's, and Pyongyang's involvement in summit- and working-level deliberations. And given the destructive potential to threaten the U.S. homeland, the nuclear issue taking a seat as the top-priority matter when it comes to dealing with North Korea appears justified.

But the Kim regime presents a more diverse, complex, messy array of problems for Washington and its allies, and the relative overlooking of these “peripheral” issues creates more opportunities and vulnerabilities for Pyongyang to exploit. The Department of Defense articulated this in its 2019 Indo-Pacific Strategy Report (PDF) by enumerating a litany of ways Pyongyang poses security challenges to the United States and its global partners. While conceding up front that achieving the DPRK's final, fully verified denuclearization remains the cornerstone impediment to mitigating the North Korean threat, the paper was keen to remind the reader that the DPRK nuclear threat is one factor—albeit a critical one—in the broader context of relations with North Korea.

Take, for example, the Kim regime's illegal ship-to-ship transfers of coal and heavy machinery in violation of United Nations sanctions. In April 2018, Indonesian authorities seized the North Korean ship Wise Honest while the ship, carrying over 25,000 tons of coal worth almost $3 million, sailed into Indonesian waters without hoisting a nationality flag and by illegally registering under the jurisdiction of two countries. The ship was used to transport the coal to Russia, China, and other countries; revenue from the coal trade likely funds North Korea's nuclear and missile programs.

The United States seized the Wise Honest in May—the first such enforcement action against a North Korean ship for violating international sanctions. Several U.S. banks were unwittingly embroiled in the scheme, with the Wise Honest drawing more than $750,000 in payments for the maintenance, equipment, and improvement of the vessel through accounts at one of the banks. South Korean companies also have been implicated in the scandal.

The ongoing Wise Honest scandal is not only a case in point of North Korea's sanctions evasion schemes; it also underscores the networked, multinational reach of the DPRK threat and the unwitting parties' susceptibility to finding themselves implicated in Pyongyang's deft and adaptive illicit activities—usually after the fact.

Then there's North Korea's human rights record. Forced labor, prison camps, sexual abuse, and denial of individual basic liberties—food, sanitation, health, and expression—are repressive tools utilized by the regime to terrorize and dominate its citizens under its iron-fisted rule. In late May, South Korean press reported that Kim had purged six officials—including lead negotiator Kim Hyok Chol and Kim Jong Un's right-hand man, Kim Yong Chol—to cast blame for the failed nuclear negotiations in Hanoi. Kim Hyok Chol was rumored to have been executed by a firing squad; Kim Yong Chol, sent to a labor camp. Although both men resurfaced several days later, the regime's practice of terror-induced loyalty has been a tried-and-true method of course correction and imputing of blame by the Kim dynasty.

In 2017, Kim Jong Un hired assassins to kill his elder brother, Kim Jong Nam, at the Kuala Lumpur airport using a VX nerve agent. North Korea also detained and tortured University of Virginia student Otto Warmbier on alleged charges of tampering with a propaganda poster (“hostile act against the state”). Warmbier was held in DPRK custody for 17 months and later returned to his family in a vegetative state; he died six days after returning to the United States.

With two summits with Pyongyang complete and little to show in the way of deliverables on dismantlement, a declaration of all its nuclear facilities and test sites, or a timeline, hopes that a third summit may yield a denuclearization deal seem a bit unrealistic. Essentially, there has been no indication of intent on Kim's part to denuclearize.

Third summit or not, solving the North Korea problem is about more than just nukes. Coercing and constraining the regime's illicit revenue-generating schemes and sanctions-skirting tactics, and embarrassing Pyongyang for its poor track record on human rights—and doing so continually, persistently, and collectively with U.S. allies—could be critical to making substantial progress not only on the nuclear issue, but on the overall North Korean threat.

Because, after all, the North Korea problem is much greater than nukes.

Soo Kim is a policy analyst at the nonprofit, nonpartisan RAND Corporation. She previously was a CIA North Korea analyst, focusing on the regime's leadership, nuclear proliferation, and propaganda analysis.

This commentary originally appeared on The Hill on June 17, 2019. Commentary gives RAND researchers a platform to convey insights based on their professional expertise and often on their peer-reviewed research and analysis.