A Challenging Moment for Boris Johnson 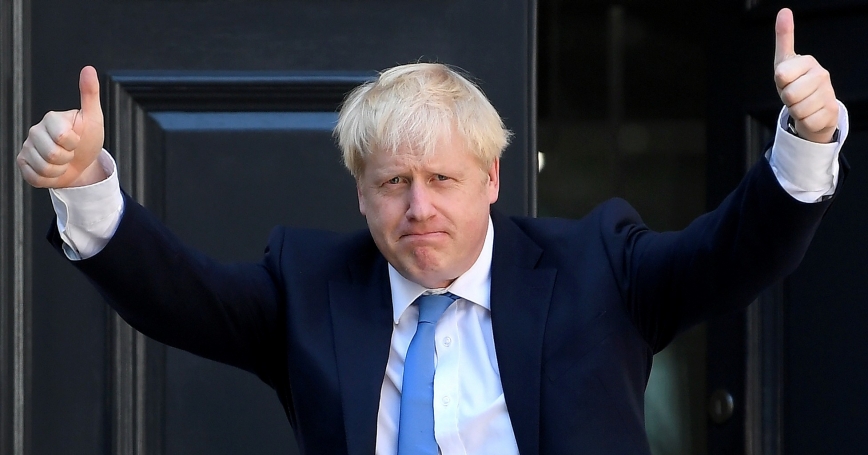 Boris Johnson arrives at the Conservative Party headquarters after being announced as Britain's next prime minister, London, July 23, 2019

In one of the year's least surprising election outcomes, the 180,000 rank-and-file members of Britain's Conservative Party (“the Tories”) chose Boris Johnson as the party's next leader, which means he will be prime minister for as long as the Tory party can muster a governing majority in Parliament.

By many accounts, Johnson has aspired to be prime minister for 40 years. He briefly ran in 2016, following the unexpected success of the Brexit referendum that he supported and the consequent resignation of David Cameron. The 2016 campaign quickly failed when Johnson had a falling out with his Brexit campaign partner Michael Gove, and Theresa May won the job unopposed. This time, a more disciplined and strategic campaign won the prize.

Johnson will bring advantages, and disadvantages, in seeking to lead the United Kingdom through a period as challenging for it as the Suez Crisis or (perhaps) the darkest days of World War II.

Johnson will seek to lead the United Kingdom through a period as challenging as the Suez Crisis or perhaps even World War II.

His biggest advantage is his exceptional political skill. He can be entertaining, inspiring, or exasperating, as needed. Politicians need brands, and Boris's disheveled appearance, occasionally sharply funny barbs, and unpredictability will ensure the British, and world leaders, pay attention to him. He'll need his political skills to hold off a challenge on the right from the Brexit Party and its leader, Nigel Farage. An irony of Brexit is that the referendum called by Theresa May's predecessor, David Cameron, as a way to reunify a Tory party riven by differences over the European Union may end up splitting it permanently.

For the U.K., the most important bilateral relationship (by far) is with the United States. President Trump recently said, “I like Boris Johnson,” and that he expects Johnson to “straighten out” Brexit, and to be a “great” prime minister. Washington's support will be helpful, especially for the U.K., which has been recently embarrassed by a leak of critical diplomatic reporting that led to the resignation of its ambassador in Washington, Sir Kim Darroch.

On the other hand, Johnson will find himself in the same political box on Brexit as Theresa May was in, with quite possibly less flexibility because of his own earlier critiques of British EU policy.

Britain currently faces a deadline of October 31, by which point it must either approve the Withdrawal Agreement Theresa May agreed to with the EU or leave without a deal. Johnson has been scathing about the Withdrawal Agreement, because it includes a transition period in which the U.K. is subject to EU rule-making, and an unlimited “backstop” keeping Northern Ireland within the EU's Single Market until an EU-acceptable solution is found to keep the U.K.–Irish border barrier-free. (Although Johnson becomes the new resident of 10 Downing Street, he is as dependent as May was on the support the hard-line Ulster Unionist party, the UUP, which is unalterably opposed to the backstop or any solution that treats Northern Ireland differently than Great Britain.) But if it's no-deal, tariffs with the EU go on, trade may seize up, and U.K. consumers may face disruptions of all sorts.

Johnson will find himself in the same political box on Brexit that confined May, possibly with less flexibility.

During his leadership campaign, Johnson promised that the U.K. will leave the EU on October 31 “do or die,” though he implied that no-deal may be held off through some new, as yet undefined, negotiating stratagem the new U.K. government may devise. The EU is showing little enthusiasm for reopening the Withdrawal Agreement, though it might be willing to alter the non-binding political declaration.

Meanwhile, notwithstanding its tenuous internal politics, Britain is embroiled in an international crisis. Iran has seized a British tanker in retaliation for British seizure in Gibraltar of an Iranian tanker headed to Syria (in defiance of U.N. sanctions). Given the small size of its navy, the U.K. will need the negotiating (and protective) help of either the United States or the EU (or both) to find its way out of the crisis.

Britain stands with the EU on the Iran nuclear deal and with the United States on European defense autonomy. Even though all major countries oppose the seizure of tankers in international waters, differences over Iran policy complicate a united front. Thus far, Britain has welcomed the European Union's commitment to naval protection.

With his characteristic self-confidence, this week Johnson inherits a complicated international and domestic political situation with a diminished stock of British assets. That is another irony of Brexit. Advocates such as Johnson or Farage claimed it would allow London to “take back control” from Brussels. At this juncture, Johnson will have much less control than he would like. And the next national election—in 2021—is not that far away.

Ambassador Charles Ries is vice president, international, at the nonprofit, nonpartisan RAND Corporation. He served as principal deputy assistant secretary of State for European Affairs (2000–2004) and oversaw economic sections at U.S. Embassy London and the U.S. Mission to the European Union.

This commentary originally appeared on The Hill on July 23, 2019. Commentary gives RAND researchers a platform to convey insights based on their professional expertise and often on their peer-reviewed research and analysis.