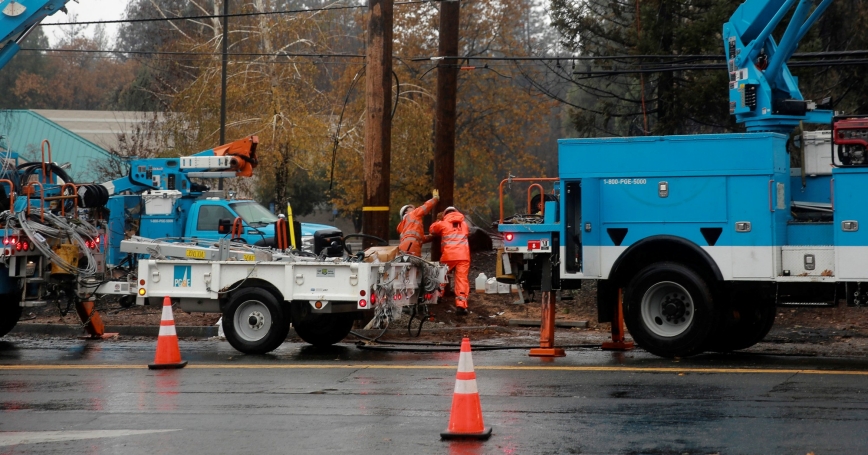 California policymakers are currently examining (PDF) how to better distribute the costs of recovering from wildfires in the state. Much of the discussion regarding how best to pay for losses caused by wildfire revolves around the liability regime for utility-caused ignitions. Both the strict liability and negligence standards have advantages and drawbacks in this context, but either standard, when combined with an appropriate cost-recovery scheme, can probably do a reasonable job achieving the desired objectives.

Regardless of which standard is chosen, however, property owners, local governments, and utilities must receive the appropriate price signals to reduce risk. Rather than broadly spreading the risk of wildfire across the state's population, there are important advantages to taking a risk-based approach. Spreading cost without regard to risk can force some people to pay for risks that they did not impose and can reduce incentives to mitigate or avoid wildfire risk. However, risk-based insurance premiums and utility rates can create financial hardships for some households in high-risk areas, and programs should be considered to alleviate these impacts.

Utilities, property owners, and city planners all influence the risk of wildfires in California. Utilities can reduce risk by insulating power lines, placing power lines underground, and keeping trees and vegetation away from lines. From the perspective of maximizing overall social wellbeing, one would certainly want utilities to exercise due care in providing electricity, but a cost-benefit perspective weighs against expecting utilities to altogether eliminate utility-caused ignitions: At some point, the costs of reducing utility-caused ignitions will likely exceed the benefits. It is also important to give planners and property owners appropriate incentives to reduce or avoid risk. Property owners can reduce risk by hardening structures and by avoiding building in high-risk areas. Local planners can reduce risk by not allowing development in high-risk areas.

One way to provide appropriate incentives is through insurance premiums that reflect wildfire risk. To some extent, this is already happening in California. In a recent study (PDF), we found that homeowners' insurance premiums per $1,000 of coverage are substantially higher and have been growing more rapidly in high-risk than in low-risk wildfire areas. Even so, insurers believed that the difference in premiums between high- and low-risk areas still did not reflect the full difference in risk. If the premium difference does not fully reflect the difference in risk, higher-risk properties are subsidized by lower-risk properties, and property owners in high-risk areas are not fully incentivized to reduce risk.

A second mechanism for providing property owners with appropriate incentives to reduce or avoid risk is through electricity rates that reflect the cost of providing service. All Californians benefit to some extent from the main transmission lines that distribute electricity throughout the state, but local distribution lines in high-risk wildfire areas create additional risk. Currently, electricity rates do not vary by wildfire risk, and ratepayers in low-risk areas are subsidizing ratepayers in high-risk areas. This cross-subsidy reduces the incentives for property owners and city planners to avoid building in high-risk areas.

A third mechanism for providing appropriate incentives for reducing wildfire losses would be to require cities and counties to internalize more of the costs associated with wildfires. The costs of fighting wildfires are often borne by state and federal agencies, and the Federal Emergency Management Agency's (FEMA) Public Assistance Program rebuilds public buildings and infrastructure. FEMA provides a type of free, low- or no-deductible insurance that pays 75 percent or more of the cost of repair following a presidentially declared disaster. These types of subsidies discourage state and local authorities from considering the full risk of decisions to build in certain areas or use certain building designs. Policies that require local authorities to bear more of the costs associated with wildfire response and recovery would incentivize cities and counties to more carefully consider the consequences of land use and permitting decisions.

One approach under consideration is a compensation fund (PDF) for utility-caused wildfires. Compensation funds have been used after other events causing widespread losses, such as the 9/11 attacks, the Deepwater Horizon oil spill, and the General Motors ignition switch incident. A wildfire compensation fund would provide payment to insurers seeking reimbursement for claim payments associated with utility ignitions or to uninsured or underinsured property owners. Such a fund promises more rapid compensation and fewer litigation and other transaction costs. Utilities would remain subject to strict liability for utility-caused ignitions.

Given the advantages of risk-based premiums and rates discussed above, such a fund could be financed in ways that minimize cross-subsidies between high-risk and low-risk areas and properties. Nearly all seem to agree that electric utilities should reimburse the fund when negligent utilities cause a fire. Investors, as opposed to ratepayers, would be responsible for providing these funds. However, the return needed to compensate investors for this risk will ultimately come from ratepayers, and it makes sense that rates reflect the variation of wildfire risk across properties. Substantial funds would also presumably need to be raised from utility customers or businesses and homeowners across the state to cover losses in utility-caused wildfires for which the utility was not negligent. Again, there are advantages to raising those revenues in ways that reflect the variation in utility-related wildfire risks across properties. To the extent that insurance rates reflect differences in risk, tying the contribution to some component of the insurance rates in an area might be an effective strategy.

The concern with an opposite approach—broadly socializing the risk—is that it dilutes incentives to reduce or avoid risk. This occurred with the National Flood Insurance Program, in which subsidized rates have likely hampered efforts to avoid or mitigate flood risk. It should be recognized that risk-based insurance premiums and utility rates can create financial hardship for some households, and steps can be taken to ameliorate these effects. For example, insurance premiums and utility surcharges could be phased in over time, or income-based assistance programs could be considered.

Wildfires have caused and will likely continue to cause substantial losses for residents, businesses, and government agencies. It is important to distribute these losses in a manner that provides incentives to reduce their magnitude over time.

Lloyd Dixon is a senior economist at the nonprofit, nonpartisan RAND Corporation and director of its Center for Catastrophic Risk Management and Compensation.