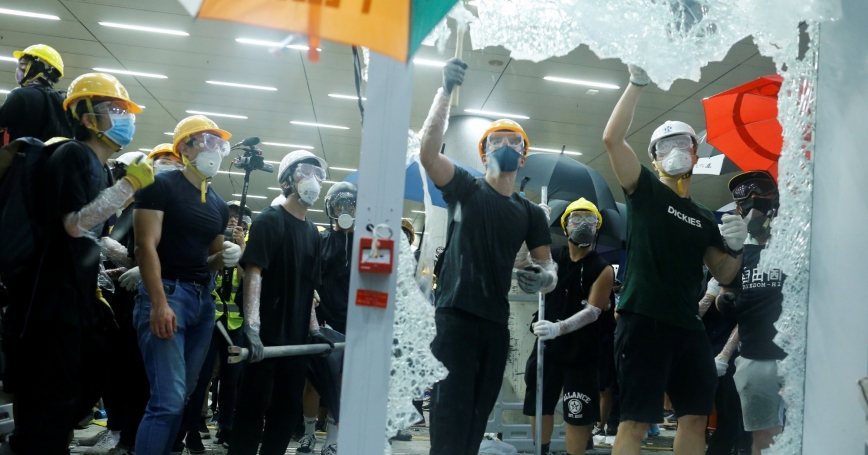 Protesters break the windows of the Legislative Council building on the anniversary of Hong Kong's handover to China in Hong Kong, July 1, 2019

United under the banner of “One China,” Hong Kong and China are supposed to live in harmony despite their differences. But recent events in Hong Kong have posed the stiffest challenge yet to Beijing's sovereignty, and if sustained, could push China to react to protect its national interests.

For months protesters have been marching against Hong Kong's chief executive and Beijing-backed leader Carrie Lam's proposed extradition law. The law would authorize Lam's government to extradite individuals accused of crime to face prosecution and punishment in China. Although Lam has suspended the draft law from consideration, she has also refused to permanently withdraw it, raising suspicions about her intentions and sparking calls for her to step down.

On July 1, which happened to be the 22nd anniversary of Great Britain's handover of Hong Kong to China, the protests seemingly came to a head. Some protesters stormed into parliament, graffitied black the Hong Kong Special Autonomous Region (of China) symbol, tore out pages of the Basic Law that stipulates Hong Kong's rights as part of China, hung the British colonial flag and occupied the chamber in an ultimate rebuke of Beijing's authority over Hong Kong.

Meanwhile, Lam on the same day toasted to Beijing's “one country, two systems”—Hong Kong's recognition of the existence of only “One China” in exchange for semiautonomous governance and economic systems—and offered a decidedly rosy perspective of life under the arrangement. For example, Lam said that Hong Kong, “Backed by the motherland and open to the world…has continued to leverage its unique advantages under 'one country, two systems.'”

Early on July 2, while acknowledging that the vast majority of protests were “peaceful and rational,” Lam also bemoaned actions against parliament as “heartbreaking, shocking, and [a] law-breaking scene…Nothing is more important than the rule of law in Hong Kong.”

While it is difficult to predict where things will go from here, one thing is certain: failure of “one country, two systems” is not an option for Beijing, and it will do whatever is necessary to prevent Hong Kong from breaking away. As I have written recently, “one country, two systems” is under siege not only in Hong Kong but also in Taiwan, where the arrangement is yet to be implemented but is deeply unpopular in the run-up to the January 2020 presidential election. In fact, the incumbent president, Tsai Ing-wen, who is despised by Beijing, has probably received a boost from recent events in Hong Kong.

Failure of "one country, two systems" is not an option for Beijing, and it will do whatever is necessary to prevent Hong Kong from breaking away.

If tensions were to rise further in Hong Kong, then “one country, two systems” would likely become even less palatable to Taiwan. That simply cannot happen on Chinese president Xi Jinping's watch. Xi has staked his legacy on leading China's national rejuvenation through his “China Dream” that entails integrating—or reintegrating, from Beijing's perspective—Hong Kong, Macau and Taiwan with the mainland.

Despite the negative symbolism of protesters unfurling the colonial British flag in a ransacked parliament, Beijing is likely to remain calm as the Hong Kong police are world class and can handle the matter appropriately. However, violent and destructive activities on a massive scale pose a much more significant concern. To date, protesters have overwhelmingly remained peaceful, including the two million that protested on June 17, the largest protest ever recorded in Hong Kong. But a change in this dynamic could unnerve Beijing to the point of prompting action.

None of these decisions would be easy. First Beijing might force Lam's resignation. Doing so essentially would admit Chinese culpability in supporting her. But to leave her in place could bring about an even more disastrous outcome.

Beijing then might empower the next chief executive to change the nature of the government's interactions with the population—offering a “new deal” so to speak to encourage smoother relations. Hong Kongers would likely find this approach unsatisfactory because the new chief executive would, once again, have to be vetted by Beijing—shining an uncomfortable light on the crux of their anger over the lack of universal suffrage. Under such a scenario, Chinese sovereignty would also continue to supersede Hong Kong's local governance.

Of course, the least palatable and therefore option of last resort would be to employ military force to subdue the population. China maintains a military garrison on Hong Kong that could support local police efforts to quell future bouts of unrest. But with the horrors of Tiananmen still fresh in the minds of many and the potential for a Western response, Xi may resist activating these units at all costs. Yet given just how critical maintaining the integrity of “one country, two systems” is to Xi and other Chinese leaders, this unfortunately cannot be guaranteed.

The best outcome for China would be a return to normal operations between the government and people. Beijing is attempting to achieve this through support of the local government and influence operations that have most visibly blamed Western forces for stirring up trouble in Hong Kong. But Hong Kongers are too smart to fall for such ploys. Beijing could thus have to up its game to maintain the “one country, two systems” approach.

This commentary originally appeared on The Hill on July 3, 2019. Commentary gives RAND researchers a platform to convey insights based on their professional expertise and often on their peer-reviewed research and analysis.