Sleep Deprivation Could Do Long-Term Damage to Migrant Children 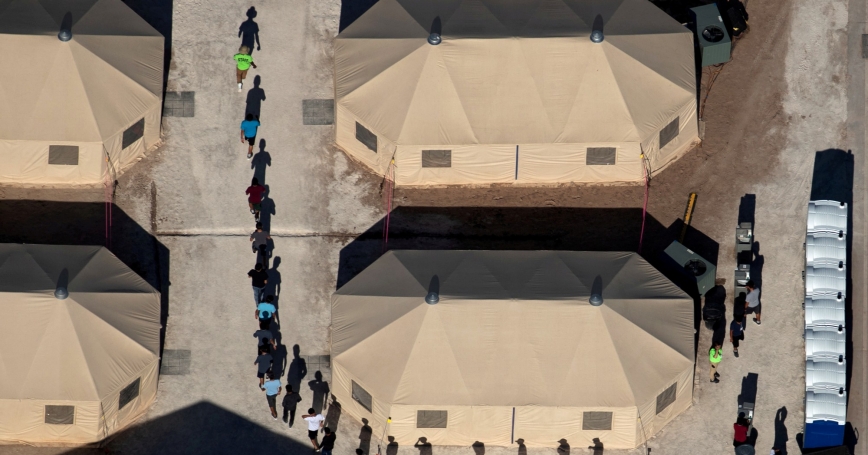 Immigrant children are led by staff in single file between tents at a U.S. detention facility near the Mexican border, Tornillo, Texas, June 18, 2018

Pictures of detention centers at the U.S.–Mexico border are deeply troubling, including images of hordes of children sleeping on the floor, huddled together under nothing but Mylar blankets. What's also troubling, but often overlooked, is the fact that the children are required to sleep under glaring lights.

These children are entering the country at a rate of thousands per month and are placing enormous stress on the limited resources in place to take care of them. The children have been exposed to a wide range of significant hardships, including separation from parents, extreme stress, and lack of access to sanitary and hygienic needs, such as toothbrushes and soap. While keeping lights on 24 hours a day is considered a necessary safety precaution, it may be at the expense of a fundamental aspect of human physiology closely connected with health and well-being: sleep.

Virtually every organism on Earth, from the humblest of fruit flies to humans, has an internal circadian clock that is closely aligned with the 24-hour light-dark cycles. Disruption of these cycles, via light exposure during the sleep period, can have profound effects on sleep, as well as physical and mental health. The consequences of this disruption are most severe among vulnerable populations, particularly children, whose developing minds and bodies are especially susceptible to damage.

Laboratory studies have shown that exposure to constant light leads to a number of negative health consequences, including sleep disruption, muscle loss, disruptions in mood and behavior, metabolic consequences linked with obesity, and pro-inflammatory responses that are associated with the development of chronic diseases.

Although we do not have human studies under such conditions (because it would be unethical), we do have a close corollary, from studies of the health impacts of night-shift work. People who work night shifts have higher rates of sleep problems, mental health disorders, obesity, heart disease, and certain cancers. In fact, shift work has been identified as a “probable carcinogen” by the International Agency for Research on Cancer and the World Health Organization.

Exposure to constant light leads to a number of negative health consequences.

Federal district and circuit courts have recently begun to recognize that sleep deprivation, even for short durations of time, may constitute cruel and unusual punishment. According to the American Bar Association's Standards on Treatment of Prisoners, correctional facilities should not deprive prisoners “of reasonable darkness during the sleeping hours.” Of course, individuals in immigrant detention facilities, including children, are not prisoners, nor is it the policy of the Department of Homeland Security to charge minors with the crime of unlawful entry. Additionally, it is important to keep in mind that these Department of Health and Human Services facilities have been overwhelmed by the extraordinary migrant surge that has strained their capacity to maintain normal operating standards.

In May alone, nearly 100,000 children and families were apprehended at the border, according to U.S. Customs and Border Protection. This surge has created unprecedented processing backlogs, causing a delay in the transfer of these children from initial custody by the U.S. Border Patrol at temporary structures, to more permanent Immigration and Customs Enforcement facilities for their initial asylum processing.

These temporary facilities were designed and constructed to detain individuals (primarily adult men) for short-term holding and staging purposes only—up to 12 and 16 hours, respectively. The law requires children to be transferred to an appropriate care facility within 72 hours. However, both aggregated DHS data and court records (PDF), and media reports indicate that some children have had to be detained in temporary facilities for days, and even weeks.

Earlier this month, President Donald Trump signed a $4.6 billion funding bill (PDF) into law to address the humanitarian crisis at the southern border. Approximately $1 billion of the funds are designated for improving the conditions of migrants initially apprehended and detained by DHS, including the thousands of children under the age of 18. However, the recent funding bill does not specifically address or require reduction of these extended detention time frames.

To alleviate the serious health problems facing this very vulnerable population, Congress, DHS, and other stakeholders could work together to immediately use the newly appropriated funds to make improvements to the temporary facilities that house children, including ensuring appropriate periods of natural light exposure and darkness, with adequate supervision to ensure safety. Another option might be to more quickly process children so that they are released or transferred to facilities with adequate accommodations within 24 hours in order to alleviate the over-capacity conditions at the temporary holding and staging structures.

The challenges faced by detained children at the U.S. southern border are immense, even if we assume all parties are working in good will to improve conditions as quickly as possible. Sleep disruption may significantly hinder the children's ability to function physically and mentally, particularly under stressful conditions. In addition to the short- and long-term health impacts, this deprivation can impede their ability to articulate and pursue bona fide asylum claims—claims on which their very lives may depend. As policymakers grapple with solutions, the importance of providing appropriate sleeping conditions should not be overlooked. And turning down the lights should be a critical part of the discussions.

This commentary originally appeared on Dallas Morning News on July 21, 2019. Commentary gives RAND researchers a platform to convey insights based on their professional expertise and often on their peer-reviewed research and analysis.