The Flawed Logic of Proportionality 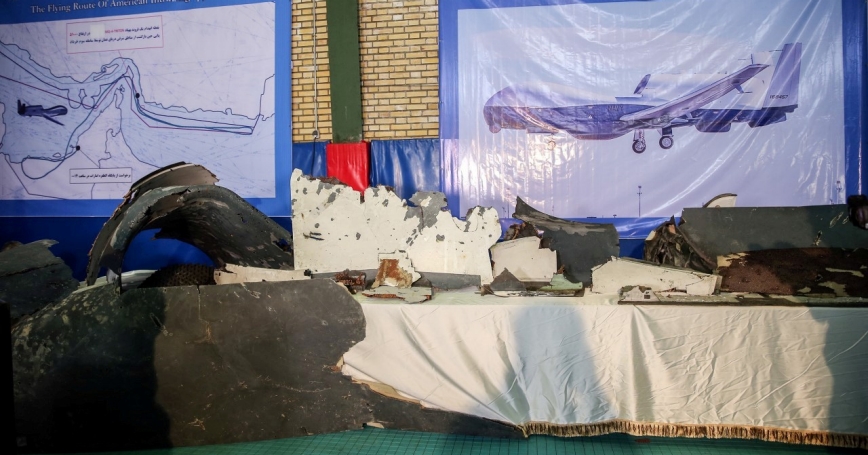 The purported wreckage of an American drone is displayed by the Islamic Revolution Guards Corps in Tehran, Iran, June 21, 2019

President Trump recently halted a retaliatory strike against Iran on the basis that it would have claimed many Iranian lives and was “not proportionate to shooting down an unmanned drone.” The decision angered some within his own party and drew grudging praise from unlikely corners, ranging from members of the House Democratic leadership to the New York Times editorial page.

But in the flurry of commentary since the decision, relatively little attention has been given to Trump's reason for doubling back on his decision: the logic of proportionality.

There are plenty of good reasons to avoid bombing Iran. With the sudden resignation of Acting Secretary of Defense Patrick Shanahan, the Defense Department's leadership is in flux. The president himself is a controversial figure and would likely face an uphill battle in trying to rally support at home and abroad for another war. A new war may require congressional approval and Congress has not approved such action.

Many European allies are skeptical of the United States' hardline policies towards Iran and are cautioning restraint. Perhaps above all, after decades of wars in Iraq and Afghanistan, the American public may not want yet another Middle Eastern conflict.

The logic of striking Iran rests on reestablishing deterrence. By downing an American drone in what the U.S. claims was international airspace, Iran dared the U.S. to act. Leaving such a challenge unanswered could set a dangerous precedent, especially after Iran attacked two tankers in the Strait of Hormuz the previous week. As Sen. Tom Cotton (R-Ark.) summed up: “What I see is Iran steadily marching up the escalation chain. I fear that if Iran doesn't have a firm set of boundaries drawn around its behavior, we're going to see an attack on a U.S. ship or a U.S. manned aircraft.”

Deterrence, in turn, rests on what Nobel Prize-winning economist Thomas Schelling called, “the power to hurt.” For deterrence to work, the U.S. may need to demonstrate not only the capability but also the will to inflict more hurt on Iran than it, in turn, could inflict on the United States. If Iran takes a proverbial pawn, the U.S. could take a knight. A knight could be met with a rook and so on in the dangerous game of chess that is international politics.

Proportional responses are not likely to solve anything. They may infuriate an adversary by striking its territory without intimidating it from further escalation.

Proportional uses of force accomplish none of this. Striking Iran either through cyber-attacks or through $1.4 million-a-pop cruise missile strikes (which may cost more than the damage they inflict) arguably does little to establish American credibility. Indeed, the accounts of the Iran's Islamic Revolutionary Guard Corps celebrating the downing the American drone, despite the reported cyber-based retaliation for the oil tanker attacks, seems to prove this point.

Proportional responses are not likely to solve anything. They may infuriate an adversary by striking its territory without intimidating it from further escalation. They come with the moral repercussions inherent in any use of force, without the plausible justification that such a one-time use of force may reestablish deterrence and with it, peace. If anything, proportional responses demonstrate that the United States may be more interested in the appearance, rather than reality, of action, more to serve its own domestic ends than accomplish its international objectives.

One need only look at the United States' recent uses of force as evidence of their ineffectiveness. Early in the Trump administration, the U.S. struck Syria in retaliation for the Assad regime's use of chemical weapons against its own people. The strike did little to limit Assad's brutality. Thousands more have died since those cruise strikes—including by chemical weapons—and Assad himself has consolidated control over his country.

Previous administrations also have advocated such behavior. The Obama administration talked about an equally limited strike on Syria to punish Assad for crossing its “red line” on chemical weapons before opting instead for an equally hollow diplomatic solution. The Clinton administration launched impotent strikes on Osama bin Laden after the attacks on two U.S. embassies in a failed attempt to deter al Qaeda. These demonstrations might seem to show American resolve in the moment, but they rarely prove successful in hindsight.

Presidents should never use force lightly abroad, and, as mentioned earlier, there are plenty of good reasons why the U.S. should avoid attacking Iran. But if the United States must resort to force, it might be best to avoid the flawed logic of proportionality. Rather, it could consider the lessons of Schelling on inflicting hurt.

Raphael S. Cohen is a political scientist at the nonprofit, nonpartisan RAND Corporation and a professor of security studies at Georgetown University. He is also a former active duty Army officer and Iraq war veteran.

This commentary originally appeared on The Hill on June 29, 2019. Commentary gives RAND researchers a platform to convey insights based on their professional expertise and often on their peer-reviewed research and analysis.