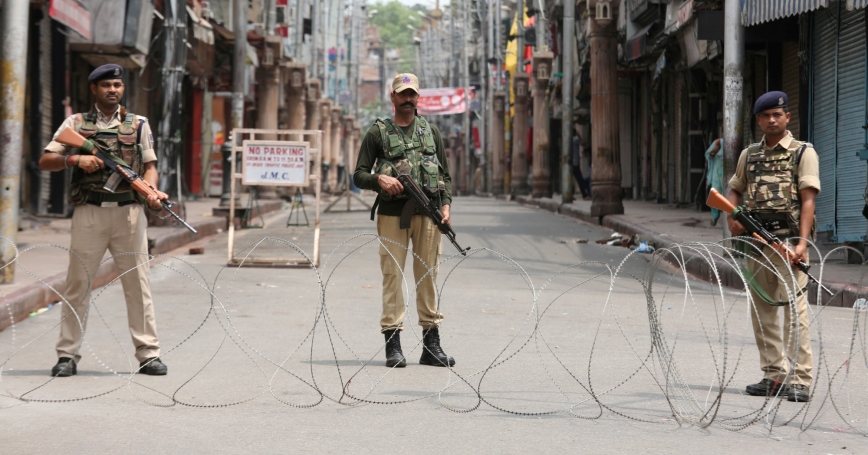 If you didn't notice that Prime Minister Narendra Modi just changed the status of the restive Indian state of Jammu and Kashmir, I understand. On August 5, his government introduced legislation to abrogate Article 370, and even Article 35A, and—see, I've lost you already.

But don't let jargon and legalese distract you: This may be the most important event in an enormously volatile part of the world since the end of the last century, with repercussions that will extend far beyond Kashmir itself. Most immediately, they will be felt throughout India, Pakistan, and Afghanistan, but the long-term effects could ripple much farther afield.

Does majority rule mean that majorities simply rule? Or does genuine democracy require that minorities be granted institutional protection to prevent their voices from being swamped?

In reality, what's at stake is the definition of democracy: Does majority rule mean that majorities simply rule? Or does genuine democracy require that minorities (whether defined in religious, ethnic, or ideological terms) be granted institutional protection to prevent their voices from being swamped? It's a question with which nations across the world are now wrestling—not least the United States, Britain, and much of Europe. Except in Kashmir, the answers carry with them a non-zero risk of nuclear war.

Jammu and Kashmir is the only Muslim-majority state in a Hindu-majority nation. Explaining how it got that way requires a bit of history: In the colonial era it was part of a theoretically independent princely state of the same name, which had also included territory now administered by Pakistan and China. In 1947, when the British insisted that some 560 puppet princes chose one or the other of the newly created nations to join, the maharajah of Jammu and Kashmir dithered: Sandwiched between mostly Hindu India and mostly Muslim Pakistan, he (like many of his principality's citizens) hoped for independence. It was not to be. Pakistan-based forces invaded, and once the maharajah signed his approval for accession, India air-lifted troops to block them. The nations have fought two major wars and many bloody skirmishes over Kashmir, but the Line of Control drawn after the 1948 United Nations cease-fire remains essentially the same today.

Under Article 370 of India's constitution, enacted when the trauma of Partition was still raw and something like 1 million people had been killed in Hindu-Muslim violence, Jammu and Kashmir was granted wide-ranging autonomy. (Until 1965, the state's elected leader even bore the independent-sounding title of prime minister.) Most of the privileges accorded by Article 370 have since been rendered symbolic, but Modi's Bharatiya Janata Party (BJP) had long promised to abolish this special dispensation regardless. After winning an increased parliamentary majority in this year's election, it claimed a mandate to enact its agenda.

One aspect of the status change most galling to opponents is Modi's decision to split Jammu and Kashmir into two separate entities: the narrowly Buddhist area of Ladakh is to be hived off as one unit, with the mostly Hindu Jammu and the solidly Muslim Kashmir Valley as the other. Moreover, these will be union territories rather than full states: Not only will Kashmiris lose the special status they were granted under the constitution, but they will have less autonomy than almost all Indian citizens (the other union territories combined contain about 2 percent (PDF) of the nation's population).

In the short term, this move will certainly destabilize a region that experienced a bloody insurgency throughout the 1990s, and has only fitfully been returning to normal life since. The Modi government recognized this—in expectation of unrest, it deployed tens of thousands of security forces, placed most major Kashmiri political leaders under house arrest, shut schools, expelled nonresidents, and imposed a telecommunications and internet blackout.

Every confrontation between India and Pakistan brings the potential for escalation to the nuclear arena.

The risk of conflict with Pakistan is much higher today than it was last week. Kashmir is the most controversial of issues, and Islamabad may respond by hiking its support for terrorist groups like Jaish-e Muhammad and Lashkar-e Taiba: This year, the former killed 40 Indian policemen, provoking India to launch its first air strike on undisputed Pakistani territory since 1971; in 2008, the latter was responsible for a multiday assault on the Indian commercial center of Mumbai that left more than 160 victims (most of them civilians) dead. Every confrontation between India and Pakistan brings the potential for escalation to the nuclear arena. India's military strategy includes detailed plans for a “Cold Start” invasion in response to a potential terrorist action—and Pakistan (which could probably not repel such an invasion by conventional means) has notably not pledged to refrain from using nuclear weapons in the first instance.

Yet the impact of this decision by Modi's government is more likely to come not as a sudden blast of radiation, but a slow transmogrification of democracy—in India, in South Asia, and quite possibly much farther. The key mechanism may be Modi's removal of the rule, dating back to colonial times, barring non-Kashmiris from settling in Kashmir. Without this provision, the demographic balance of the state could shift—and with it, the idea that a vibrant democracy must take special efforts to protect the status of minority communities.

A swing of about 2.5 million residents would shift Jammu and Kashmir from majority-Muslim to majority-Hindu. In a nation of 1.3 billion, that's not such a stretch. The BJP forcefully advocates for in-migration of Hindus to the state. Officially, this applies only to those who fled Kashmir in the violence of the 1990s, but there is now no legal barrier to a full-bore program of government-sponsored in-migration. Such a move would solidify the BJP's Hindu-nationalist agenda of redefining India not as a multireligious secular state, but as a Hindu rastra in which 200 million Muslims are tolerated only so long as they remain on good behavior.

The impact on Pakistan will be similarly severe. Any hopes that Pakistan's military will cede real power to civilians could be knocked back many pegs: Whenever Kashmir is a leading issue, the military dominates all important decisions. The day after Modi's action, Pakistan's army chief said that his troops would “go to any extent” in defense of Kashmiri interests. Pakistan has also always struggled with the question of whether it should be a multireligious homeland for South Asian Muslims, or (very differently) an Islamic state. The rights of religious minorities in Pakistan, already tenuous, may suffer even greater setbacks.

Afghanistan will likely be affected as well. First, a rise in Kashmir tensions will greatly complicate efforts by the U.S. to arrange a Pakistan-brokered deal with the Taliban to permit a withdrawal of American troops. But the social and political impact may be even greater. In Afghanistan, the primary social divide is ethnic rather than religious. The three decades of civil war waged since the withdrawal of the Soviets has focused on how power should be divvied up between the Pashtuns (who, with a large plurality of the population, have monopolized power for most of the past three centuries) and minority communities such as the Tajiks, Uzbeks, and Hazara. India's development assistance to Afghanistan is focused on governance (PDF)—if India becomes an ethnonationalist state, it will be ill-placed to preach respect for minority rights to its neighbors.

Democracy is not a set of principles carved in stone. It is a living idea that changes over time. In ancient Athens, it excluded both women and ethnic minorities; in not-so-ancient America, much the same. Majoritarianism and institutional protection of minorities often stand in tension. Which of these principles will win out in each of the world's democracies remains very much an open question.

India is, quite rightly, proud of being the largest democracy on the planet. It is also one of the most firmly established: Electoral shenanigans are not unknown (it was a rigged local election in 1987 that sparked Kashmir's insurgency), but in this regard India is hardly alone. Unlike any of its neighbors, and unlike most nations on Earth, there is little chance that India will become a nondemocratic state, in a purely technical sense. It will keep conducting national-level elections that are basically fair, and will keep transferring power peacefully between parties that generally reflect the will of a majority of its population. The real question—for India and for the world—is whether this is enough.

The voices most conspicuously absent in the debate on Kashmir have been those of the Kashmiris themselves. Once the telecommunications ban is lifted, they will start to speak. But will it even matter? Under a majoritarian view of democracy, they've already been voted down: The combined votes of every single Muslim in undivided Jammu and Kashmir number several million—compared with more than 220 million votes logged nationwide for the BJP, running on a platform of enacting the status change it just implemented.

The stakes in Kashmir could hardly be higher—not merely for those who live there, or for their neighbors, or for their region, but for what democracy of the future will even mean.

This commentary originally appeared on The Atlantic on August 8, 2019. Commentary gives RAND researchers a platform to convey insights based on their professional expertise and often on their peer-reviewed research and analysis.