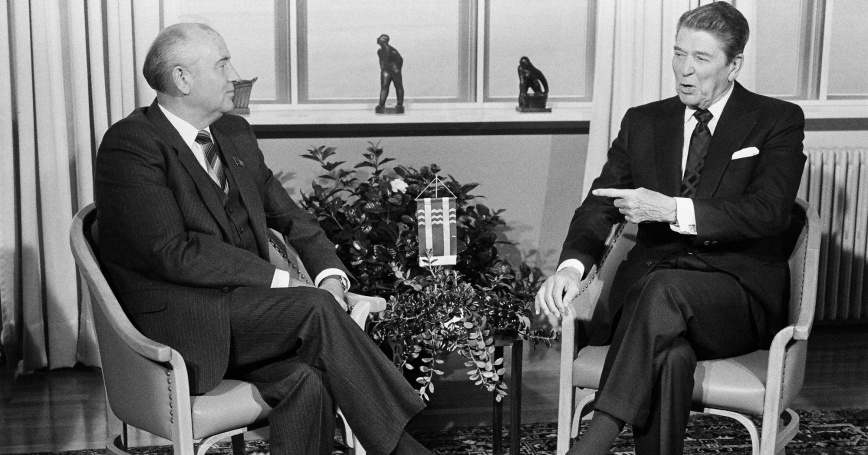 Rising public protests in Russia, dramatized by the police cracking heads last weekend in Moscow, may be putting the Kremlin on the defensive at home. Abroad, however, the Kremlin is playing offense, challenging the United States and the West more than at any time since the early 1980s, when Ronald Reagan was president. Reagan's strategy to counter the Kremlin back then offers insights that could help guide U.S. policy today.

In recent years Moscow has stuck its finger in the West's eye in multiple ways. It started with the 2014 invasion of Ukraine and annexation of Crimea. Russian-led forces in Ukraine then shot down Malaysian Airlines Flight 17, killing 298 mostly Dutch citizens, and the simmering war in Ukraine's east has continued to undermine European security. In the same year, Washington accused Russia of building new missiles that violate the terms of the 1987 Intermediate-Range Nuclear Forces Treaty. In 2015, Moscow sent air power to bolster the brutal regime of Bashar al Assad in Syria.

In response, the United States imposed sanctions on Russian entities, NATO built up forces, and the West boosted military and economic aid to Ukraine. These steps raised the cost to Russia of its misbehavior, and they possibly deterred some additional malign activity. What they did not do is compel Russia to fully retreat from any of the activities listed above.

This Kremlin aggressiveness is similar to what transpired during Reagan's first term. The Soviet Union sought to subdue Afghanistan, threatened Europe and Japan with new SS-20 missiles, shot down Korean Airlines flight 007, and coerced Poland into snuffing out the Solidarity trade union by imposing martial law.

Amid the deaths in quick succession of three aged, rigid Soviet leaders, Reagan eschewed summit-level meetings with Moscow. Summitry with a Kremlin that overestimated Soviet power and underestimated Western determination was unlikely to yield results. Instead, Reagan turned up the pressure. Together with allies, he aided Afghan rebels and Solidarity in Poland, engaged in a major military buildup, and exposed Soviet disinformation (PDF).

This helped lay the groundwork for the accomplishments of Reagan's second term, the one for which he is most remembered.

When reformist Soviet leader Mikhail Gorbachev came to power in 1985, he was eager to lift the depressed Soviet economy by easing tensions with the West and reducing military spending.

The two presidents began modestly, by increasing people-to-people and consular ties. Then they reached higher by negotiating the historic INF Treaty, the first accord ever to eliminate an entire class of nuclear arms. These steps built confidence and habits of cooperation that allowed the countries later to cooperate on German reunification and on a joint condemnation of Iraq's 1990 invasion of Kuwait.

Just as in the early '80s, the United States and the West today face a Kremlin that emphasizes military intervention and political confrontation and suffers from a stagnating economy.

Just as they did in the early 1980s, the United States and the West today face a Kremlin that emphasizes military intervention and political confrontation and suffers from a stagnating economy. To buttress its assertive posture toward the West, the Kremlin employs shrill propaganda and scare tactics. During a speech in March 2018, for example, Russian President Vladimir Putin showed a video simulating a nuclear strike on Florida.

Critics of President Trump point to diplomatic fumbles—particularly his refusal to confront Putin on meddling in the 2016 elections—as enabling Russia's continued international aggression. But any U.S. president would struggle to make much progress with today's hardline Kremlin.

Trump's supposedly “very, very good relationship” with Putin aside, the West overall is again relying more on strength than accommodation in dealing with the Kremlin. In addition to sanctions and a bigger NATO presence, the West is also boosting resilience to cyber and election interference, and cooperating with countries in the Americas seeking to restore democracy in Venezuela.

Washington could prepare for future diplomatic openings—as Reagan did for the negotiations that led to the INF Treaty—but breakthroughs may have to wait for a Kremlin that is less aggressive abroad and emphasizes economic and social improvement at home.

As in Reagan's initial years, today may be a time to counter misbehavior until diplomacy can pay greater dividends. In the meantime, people-to-people ties as well as scientific and commercial interactions help sustain a foundation for better future relations.

William Courtney, an adjunct senior fellow at the nonpartisan, nonprofit RAND Corporation, was U.S. ambassador to Kazakhstan, Georgia, and a U.S.-Soviet commission to implement the Threshold Test Ban Treaty.

This commentary originally appeared on RealClearWorld on August 2, 2019. Commentary gives RAND researchers a platform to convey insights based on their professional expertise and often on their peer-reviewed research and analysis.