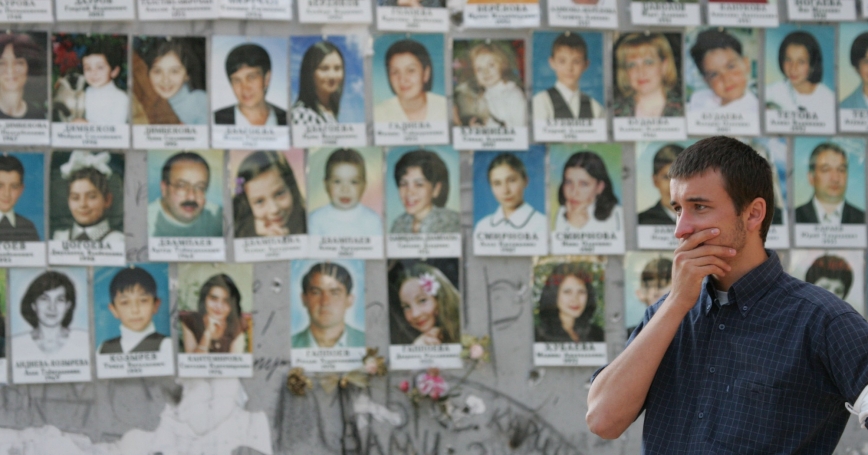 A relative grieves at Beslan school No.1 at a wall with portraits of victims of school siege that took the lives of 331 people, in Beslan, Russia, September 1, 2005

Fifty years ago this month, urban guerrillas in Rio de Janeiro kidnapped Charles Burke Elbrick, the American ambassador to Brazil. This was not the first modern kidnapping of a diplomat, but it set off a worldwide wave of terrorist kidnappings that continues today.

Seizing hostages became a major feature of the early terrorist repertoire—accounting for roughly a fifth of all their attacks. Terrorists hijacked airliners, kidnapped foreigners, and seized buildings to create what were called barricade and hostage incidents where, surrounded by security forces, the captors would bargain for their own safe release, along with their other demands. By taking hostages, terrorists could sometimes gain concessions and can attract worldwide attention to themselves and their causes.

Today's terrorists tend to kidnap opportunistically—journalists, photographers, aid workers, missionaries, tourists, women and girls—anyone they can get their hands on. The Islamic State kidnapped numerous foreigners, releasing some for ransom payments, killing others—American hostages were more likely to be killed. The terrorist group beheaded three American hostages in 2014, recording two of the grisly murders on videos uploaded to YouTube. The murders contributed to Washington's decision to destroy the Islamic State.

By taking hostages, terrorists could sometimes gain concessions and can attract worldwide attention to their causes.

Kidnappings of foreigners continue today, but their numbers pale in comparison to ransom kidnappings of locals that help to fund terrorist enterprises like ISIS. The destruction of the Islamic State reduces its financial needs, but it also reduces its ability to collect taxes, sell oil, and engage in other open means of generating revenue that come with controlling territory. As a result, ISIS is again looking to kidnapping to help fill its coffers.

Wherever there is a breakdown in law and order—in conflict zones, for example—kidnapping gangs quickly emerge. This happened in Lebanon, the Balkans, Iraq, Libya, Nigeria, and most recently Syria. As long as it remains a lucrative endeavor, new terrorist groups will kidnap or buy hostages from criminal gangs to fund their startups.

Deaths caused by terrorist assassinations and bombings are tragic, but hostage situations involving foreigners can hurl governments into intense dramas that oblige political leaders to make life-or-death decisions. They must weigh national interests against a natural desire to save lives. They are pushed in one direction by the pleas of desperate hostages and their families, but constrained by the negative consequences that come with surrendering to terrorist demands. Ransoms fund further terrorist operations. Releasing prisoners in exchange for hostages subverts the judicial system. Can hostage holders be allowed to determine national policy?

Kidnappings of foreigners continue today, but their numbers pale in comparison to ransom kidnappings of locals that help to fund terrorist enterprises like ISIS.

These concerns seem abstract and cruel when a life hangs in the balance. Hardline policies are easy to pronounce, hard to stick to in an actual incident. Is saving the life of a hostage the paramount objective even if it means making concessions, or must the lives of hostages be sacrificed to national interests? Will the episode end in a happy homecoming—at a price—or a hideous beheading?

When dealing with a terrorist enterprise like ISIS, governments may find themselves challenged by a foe that is largely invisible and unlikely to engage in negotiations. That's the case with British journalist John Cantlie, kidnapped by ISIS in 2012. UK security officials said as recently as this year that Cantlie may still be alive, but the government has been unable to do anything to secure his freedom.

Elbrick's captors demanded the release of 15 of their comrades in prison. The Brazilian government agreed. The prisoners were flown to asylum in Mexico and the ambassador was released three days after his abduction. In the following months, armed groups in Brazil kidnapped the Japanese consul general, the German ambassador, and the Swiss ambassador.

The tactic quickly spread throughout the world. In the following 15 years, there were 150 kidnappings and attempted kidnappings of diplomats. American diplomats were the most frequent targets, accounting for more than a third of the total.

In September 1972, Black September terrorists seized hostages at the Munich Olympics to demand the release of Palestinian prisoners held by Israel. The episode ended in a shootout with German police in which all of the hostages and all but three of terrorists were killed. Still, barricaded hostage situations continued. In the following decade, armed groups seized control of 48 embassies or other diplomatic facilities. U.S. diplomatic facilities were the targets in six of these cases, most dramatically in November 1979, when militants seized the American embassy in Tehran. The new revolutionary government of Iran made little attempt to resolve the situation, which dragged on for 444 days before the hostages were released.

In almost all of the early cases, hostage takers seized foreign hostages in order to increase their leverage over local governments who were the targets of their demands. The United States did not have to make concessions, but expected local governments to do so in order to ensure the safe release of the hostages. Washington's ability to exert diplomatic pressure was constrained by fears that the U.S. government itself would be dragged into the negotiations. But attitudes were also gradually hardening.

The United States found itself the target of terrorist demands in March 1973 when members of Black September, a Palestinian terrorist group, took over the Embassy of Saudi Arabia in Khartoum during a diplomatic reception. The captors demanded the release of Palestinian prisoners held by Israel, Black September's leader then held in Jordan, members of the Red Army Faction terrorist group who had been arrested in Germany, and Sirhan Sirhan, the convicted assassin of Senator Robert F. Kennedy serving a life sentence in California. At a press conference during the episode, President Nixon was asked if the United States was considering releasing Sirhan. Nixon responded that the United States would not give in to blackmail. Shortly after the president's remarks were broadcast, the captors killed the two American and one Belgian hostage. That sealed the no-concessions policy in blood.

Kidnappings in Latin America declined with the destruction, often through brutal repression, of the groups involved. Embassy takeovers also declined as diplomatic facilities became virtual fortresses and governments became increasingly resistant to meeting the demands of hostage takers. This reinforced the belief that a no-concessions policy effectively deterred kidnappings.

Recent hostage incidents differ greatly from the barricade and hostage situations of earlier times. If the demands of at-large hostage takers were not met, kidnappers could kill their hostages and disappear. Surrounded hostage takers could not.

Although few of the terrorist groups that engaged in kidnapping over the past half century have survived, seizing hostages funded their operations and earned them notoriety. And for that reason, it will likely remain a mainstay of the terrorist tool kit.

Brian Michael Jenkins is a senior adviser to the president of the nonprofit, nonpartisan RAND Corporation.

This commentary originally appeared on Homeland Security Today on September 24, 2019. Commentary gives RAND researchers a platform to convey insights based on their professional expertise and often on their peer-reviewed research and analysis.