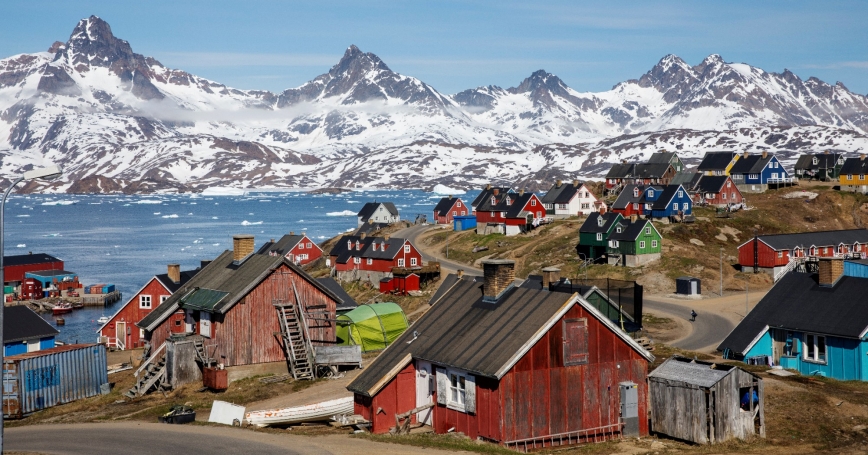 Snow-covered mountains rise above the harbor in Tasiilaq, Greenland, June 15, 2018

Recent reports of U.S. interest in purchasing Greenland have raised new questions in the public discourse about the potential benefits and liabilities of territorial acquisition. While Greenland's resource endowment and geographic position would confer economic and strategic value to the United States, its postcolonial history and unique governance regime complicate the prospect of direct ownership.

Purchasing territory is not a particularly unusual idea in a broad historical context. The United States did so several times in the 19th century and attempted to purchase Greenland as recently as 1946. Greenland is believed to have the largest deposits of rare earth minerals outside China, many of which are thought to be critical to U.S. national security and the economy. It occupies a central location between the North Atlantic and Arctic Oceans, along several shipping routes that are becoming increasingly accessible as sea ice melts, as well as numerous transcontinental flight paths that rely on Greenlandic airspace. Control of Greenland could also make sense strategically for the United States in light of Russia's Arctic military buildup and China's recent attempts to purchase a naval base and build airports on the island. Taking over responsibility for Greenland's foreign affairs from Denmark would grant veto power to the United States in security matters, enabling the United States to counter the spread of Chinese influence on the island.

There are several ways the United States can benefit from Greenland's geostrategic advantages without owning it.

However, owning Greenland would not guarantee these benefits. While nominally part of the Kingdom of Denmark, Greenland governs its own domestic affairs, including resource development, policing, and the judiciary. Greenland's march toward autonomy began with Home Rule in 1979. It has since seen numerous further transfers of power from the Danish Crown to its Parliament. The Self-Government Act of 2009, recognized by Denmark, asserts Greenland's right to self-determination such that any potential territorial transfer would take place only with the assent of its people. It is extremely unlikely that Greenlanders would agree to any transfer that did not preserve at least the level of autonomy they currently enjoy, even if the United States were to assume responsibility for Denmark's current annual subsidy of $670 million. Therefore, while “owning” Greenland would confer on the United States the right to bar foreign entities from doing business there, under home rule Greenlanders could likewise deny resource access to American firms. Similarly, the United States could not be assured that Greenland's Home Rule Government would allow the construction of new military installations.

In any case, it is unclear that Greenland would agree to a U.S. takeover in the first place, as U.S. interest thus far appears primarily focused on Greenland's potential value to the United States rather than on how the United States would serve the needs of Greenland's 56,000 mostly indigenous people.

There are several ways the United States can benefit from Greenland's geostrategic advantages without owning it. As part of the NATO alliance, Greenland shares security interests with the United States and hosts its northernmost permanent military installation at Thule Air Base, 750 miles north of the Arctic Circle. Thule's primary strategic value is as an early-warning radar station providing missile tracking and monitoring of Earth-orbiting objects, and the U.S. military recently reduced its footprint by 40 percent to enhance operating efficiency in the cold environment without sacrificing its core mission. It is likely that negotiating with Denmark for continued use of this base would cost substantially less than buying Greenland.

Recent diplomatic controversies aside, the United States already enjoys favorable relations with Denmark and Greenland and is well positioned to project power through its existing alliances worldwide.

Further, the U.S. government can create incentives for U.S. firms to gain favorable access to resources through trade deals aimed at building sustainable infrastructure in partnership with Danish and Greenlandic firms. There is considerable room for growth here, as American companies have been slow to invest in the Arctic outside of Alaska, while the Chinese have established a free trade agreement with Iceland and have purchased stakes in Greenlandic mines and Russian oil and gas projects.

Greenland's foreign minister's remark that Greenland is “open for business” shows that Greenland is seeking economic and diplomatic partnerships with all nations, including the United States, as it weighs whether to pursue independence from Denmark. State and private cooperation has been a hallmark of international relations in the Arctic for decades, and working with allies to promote open communication, investment in infrastructure, and confidence-building activities will be critical to promoting Arctic security in the 21st century.

The United States recently took a step toward enhancing its Arctic presence through such mechanisms by planning to re-establish a permanent diplomatic presence in Nuuk. Such ties affirm the U.S. commitment to a rules-based international order that recognizes Danish sovereignty and Greenlandic self-governance. Further, they signal assurances to allies that the United States seeks cooperative solutions to shared security concerns outside of a purely transactional framework.

Scott Stephenson is a physical scientist at the nonprofit, nonpartisan RAND Corporation.