Why Ethiopia Sailed While Zimbabwe Sank 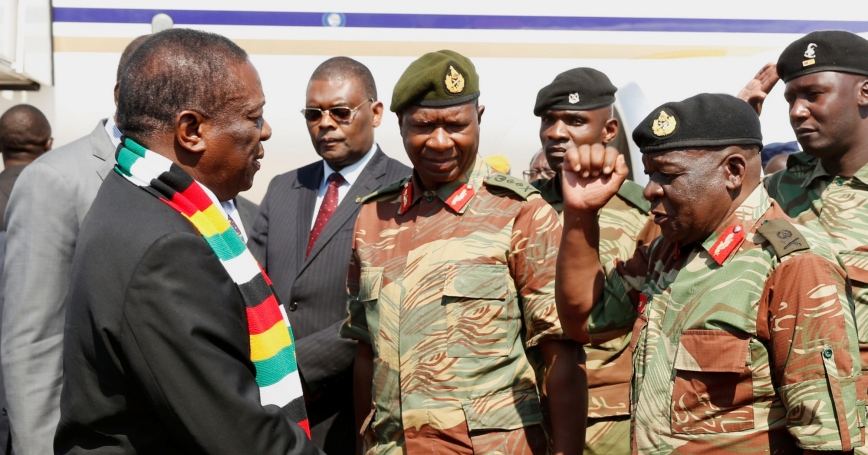 Former Zimbabwean leader Robert Mugabe, in power for 37 years, died at 95 on Sept. 6. But his legacy, and his ruthless brand of authoritarian politics, lives on through his successor, Emmerson Mnangagwa.

His country, in turn, is suffering. Despite a few nods to economic reform, including a tightening of government spending, Zimbabwe's economy is collapsing yet again, with fuel, bread, and electricity shortages. In June, the government brought back the much-maligned Zimbabwean dollar, after a decade of using the U.S. dollar and other currencies, instantly cutting savings accounts tenfold. Inflation that month reached 175 percent before the government abruptly stopped publishing official statistics.

In another African country struggling with the legacy of dictatorship, however, the future looks more hopeful. Ethiopian Prime Minister Abiy Ahmed, who came into office in 2018, has pushed to liberalize his country's economy as well as its political landscape. He has overseen the adoption of new regulations regarding civil society, moved toward a diplomatic thaw with Eritrea, and appointed a former opposition party candidate to the country's electoral board.

The nascent gains in Ethiopia offer a stark contrast to Mnangagwa's leadership record in Zimbabwe, even though both came to power promising sweeping reforms and a break with their predecessors' dictatorial ways. And although Abiy and Mnangagwa inherited semi-authoritarian political systems, with long-standing ruling parties and powerful militaries, they have very different relationships to the old guards and have taken starkly different approaches toward their economies. Abiy's ascent involved breaking with the previous agenda of his party, the Ethiopian People's Revolutionary Democratic Front (EPRDF), using legitimate institutions. In contrast, Mnangagwa's seizure of power was enabled by a coup that further bound him to the military, hurting the chances of genuine reform.

Now, at a time when outside powers are calibrating how they respond to political transitions around the world, particularly in Sudan and Algeria, the divergent paths of Ethiopia and Zimbabwe illustrate their precariousness and offer lessons for how the international community can support democratization processes in Africa and beyond.

Ethiopia's political transition began in February 2018, when Abiy took over from former Prime Minister Hailemariam Desalegn, who resigned following years of unrest and a deteriorating economic situation. Abiy, despite his security service experience, is a more earnest reformer not necessarily beholden to the old guard in the EPRDF. Though Abiy's party, the Oromo Democratic Party, is one of the four main constituent parties of the EPRDF, it has not traditionally been the strongest one. While his tenure is a continuation of EPRDF rule, as a reformer from a “junior partner” within the coalition, the tenor of his governance demonstrates breaks with the EPRDF hard-liners' agenda in a number of ways.

In June 2018, Abiy ended the state of emergency that his predecessor had placed the country under. He appointed an opposition leader, Birtukan Mideksa, who had previously been imprisoned for her work, as the head of the country's electoral board, signaling commitment to a free and fair election in 2020. He oversaw the loosening of Ethiopia's tight restrictions on foreign funding of civil society organizations that work on human rights issues, and the Ethiopian Parliament removed three major rebel groups from the country's official list of terrorist organizations.

Soon after the state of emergency was lifted, Abiy reshuffled critical posts in the country's security sector, replacing the army chief of staff and the director of the National Intelligence and Security Agency. The move was widely interpreted as weakening the position of the dominant faction within the EPRDF, the Tigrayan People's Liberation Front (TPLF). It also hinted at the scale of his ambition to usher in a new era of Ethiopian governance and reshape the balance of power within the EPRDF.

Shoring up the country's faltering economy, whose past years of double-digit growth were bolstered by government investment enabled by taking on foreign loans, is another area where Abiy has made some initial progress. While Mnangagwa sits atop a collapsing economy that benefits only a few, Abiy has pushed to liberalize Ethiopia's. He aims to fully privatize state-owned sugar plants, industrial parks, and railways, as well as partially privatize the four crown jewels of Ethiopia's economy, including Ethiopian Airlines. Such reforms have profound political implications, dislodging long-established economic interests and marking a reversal from the EPRDF's previous agenda of state-led growth (which has been linked to inefficiencies and corruption).

Ethiopia's process of liberalization has not been linear—nor has it been universally popular or entirely peaceful. The arrests of several high-profile military and political figures early in the administration raised tensions between the TPLF and Abiy's supporters, with the former claiming ethnic discrimination. In June 2018, a grenade was tossed into the crowd at a rally for the prime minister, injuring more than 100 people and killing two. One year later, in June 2019, the army chief of staff was killed by his bodyguard, and the Amhara regional governor was slain by the regional head of security. Abiy's response to these assassinations, which included mass detentions and an internet shutdown, echoed the tactics of previous EPRDF administrations.

Uneasiness with privatization, both within the EPRDF's old guard and among the general population, has also placed a check on Abiy's initial road map for economic reform; the notion of partially privatizing Ethiopian Airlines, for instance, provoked blowback from Ethiopian citizens online.

Political opening at a time when the domestic balance of power is uncertain has created conditions in which sub-national politicians can garner influence and lobby for more devolution and possibly even secession. These trends have already presented an immediate challenge to the Ethiopian government; Sidama's bid for statehood, based on a constitutional provision allowing ethnic groups to pursue a referendum on statehood if such a vote is requested by its respective governing council, was mismanaged by the federal government, further extending the crisis and creating opportunities for additional political violence.

The hero worship that accompanied Abiy's initial days in office has since dissipated. But more realistic expectations aren't a bad thing. Though the reform movement has been imperfect and faces a number of hurdles, it is worth lauding the country for the changes that it has managed to achieve in just over a year.

Mnangagwa was a close confidant of Mugabe, starting as his special assistant and rising to the rank of vice president in 2014. Mnangagwa is a key member of a close-knit party-military alliance in Zimbabwe—forged during the liberation war and bound by ideology and patronage—that kept Mugabe in power for decades.

In the months leading up to his ouster, Mugabe finally turned his back on Mnangagwa and the party's old guard. He instead aligned himself with a different faction of the Zimbabwe African National Union-Patriotic Front (ZANU-PF) associated with his wife, Grace Mugabe, and others who did not fight in the liberation war, known as Generation 40 (G40). The rise of the G40 and Mugabe's ostensible plan to pave the way for his wife to succeed him threatened the old guard, and Mnangagwa's firing in early November 2017 seemingly was the last straw. Weeks after his sacking as vice president, the military and Mnangagwa launched a “coup de Grace” to protect their interests.

Once in office, Mnangagwa promised to break with Mugabe, pledging to open up the economy and political system and reengage with the international community. Mnangagwa claimed that under his leadership Zimbabwe was “open for business” and under a “new dispensation.” Despite a few cosmetic changes over his nearly two years in power, there has been no new path for the country. The new boss looks an awful lot like the old one—and in some ways Mnangagwa is even more repressive.

Although political space opened briefly in the run-up to elections in July 2018, that opening was quickly closed when the military killed six unarmed protesters days after the election. International observers (one of us, Noyes, was an observer) said (PDF) the election did not “make the mark.” Protests following fuel hikes in January 2019 were brutally suppressed by security forces, leaving 17 dead. In August, opposition protests were banned using repressive legislation that remains on the books.

Mnangagwa has continued to deploy the rhetoric of reform, but so far his actions have undercut any genuine movement toward liberalization. As Jonathan Moyo, an erstwhile ally of Mugabe's, said in 2016, ZANU-PF will not “reform itself out of power.” With the military and the old guard firmly in place, the prospects for genuine reform in Zimbabwe are bleak.

Ethiopia's and Zimbabwe's recent history demonstrates that authoritarian institutions are resilient and can present formidable obstacles to a democratic transition. While Ethiopia's reform effort remains a work in progress—and could certainly backslide into authoritarianism—unlike in Zimbabwe, some of the reformist rhetoric has resulted in liberalizing policies. This echoes recent academic research that although “coups against autocrats have sometimes led to democratization, more often they install a new set of autocratic elites.”

Zimbabwe's and Ethiopia's respective experiences also hold lessons for Algeria and Sudan, both of which recently deposed longtime rulers. The resignation of Abdelaziz Bouteflika in Algeria and the coup against Omar al-Bashir in Sudan represent precarious opportunities to break with the autocratic rule that these men oversaw in their countries.

Accepting military coups as “military-assisted transitions” sets a dangerous precedent, no matter how deplorable the record of the ousted leader.

In turn, international actors should rethink how they respond to transitions. Accepting military coups as “military-assisted transitions” sets a dangerous precedent, no matter how deplorable the record of the ousted leader. The ways in which leaders come to power affect how secure they feel in their positions and the sorts of reforms they engage in to shore up their rule.

Particularly in the context of a one-party state with a strong link between the ruling party and the military, an intraparty executive shuffle may imply a continuation of policy and priorities, despite a veneer of reformist rhetoric.

The international community should instead call a coup a coup and support a caretaker government with broad representation that bars the coup-makers. Where new leaders come to power through legitimate processes and show genuine commitment to reform, outside powers should fully support such efforts, through the provision of aid to the government and by supporting domestic civil society groups.

Mugabe's brutal legacy lives on through the system he and Mnangagwa created, while Ethiopia stands on the brink of real change. International actors can and should support such democratic openings.

Hilary Matfess is a Ph.D. student at Yale University and the author of “Women and the War on Boko Haram.” Alexander Noyes is a political scientist at the RAND Corporation.

This commentary originally appeared on Foreign Policy on September 6, 2019. Commentary gives RAND researchers a platform to convey insights based on their professional expertise and often on their peer-reviewed research and analysis.