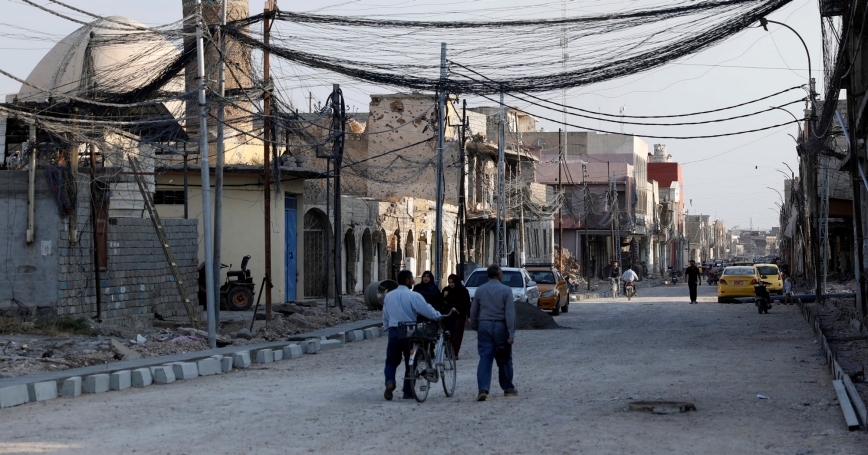 People walk on the street, where Islamic State leader Abu Bakr al-Baghdadi declared his caliphate back in 2014, in the old city of Mosul, Iraq, October 27, 2019

The recent death of Islamic State leader and self-proclaimed caliph Abu Bakr al-Baghdadi is a major blow to the Islamic State. Although many of the group's fighters have said in interviews over the years that they were not fighting for any individual but for the larger cause—an Islamic state-building project—it is undeniable that Baghdadi held a kind of elusive charisma for the organization. He will be replaced, but this does not mean that the Islamic State will simply go back to business as usual.

Baghdadi was radicalized after the U.S. invasion of Iraq in March 2003, and his religious training set him apart right away as an individual who would have an important future in the jihadi movement. Baghdadi was captured by U.S. forces and transferred to the famous “jihadi university” of Camp Bucca, the U.S. detention center in Iraq that housed some of the Iraq War's most radical captives, in February 2004.

In the camp, as the journalist Joby Warrick has observed, the young Baghdadi learned quickly that his religious and academic training gave him some degree of credibility, and he was able to interpret and translate sharia to make it more accessible to aspiring jihadis. In fact, he was considered so bookish that the Americans released him from prison in December 2004. While in prison, though, the medical team at Camp Bucca took cheek swabs and collected his DNA, a move that would prove particularly useful after the raid that killed him over the weekend.

The death of Baghdadi will likely weaken the Islamic State's command and control network.

Although there may be many consequences for the Islamic State as an organization over the next several months, there's one potential international consequence worth considering: The death of Baghdadi will likely weaken the Islamic State's command and control network and cause some of its affiliates to either assert more independence or retreat back into the localized conflicts they were previously engaged in.

After all, Baghdadi was surrounded by a cult of personality, adept at recruiting legions of foreign nationals to join his proto-state in the Levant. His stubborn insistence on staying behind the scenes—he has only given few public speeches during his five-year reign as caliph—only added to his mystique and aura of quiet religious authority.

Now, selecting a successor to Baghdadi who could do the same could prove to be a herculean task. Nobody the group selects will have his cachet, which will likely diminish the new leader's ability to recruit and keep the Islamic State as one cohesive entity, especially on a global scale.

What happens next to the Islamic State could closely mirror the trajectory of al Qaeda following the killing of Osama bin Laden in May 2011. After his death, bin Laden's longtime deputy, Ayman al-Zawahiri, was appointed to lead al Qaeda into its next phase. Zawahiri lacked both charisma and the ability to offer a unifying presence to keep the group's transnational network together.

As with the case of al Qaeda, such splits can lead affiliates in far-flung locales to pursue more parochial interests and rebuff advice from central leadership holed up thousands of miles away. During the height of the Iraq War in the mid-2000s, for example, al Qaeda in Iraq chieftain Abu Musab al-Zarqawi famously shrugged off the admonition from Zawahiri to tone down his group's sectarianism. And thus the Islamic State was born from the split between al Qaeda in Iraq and its parent organization.

One key question will be the affiliates' financial positions. If the core Islamic State group begins requesting funds from its affiliates to survive, there becomes even less of an impetus for the satellites to follow orders from a beleaguered core group. After all, Islamic State-aligned groups in the Philippines are more concerned with local issues and grievances and less attached to a global narrative. If there is any interest in establishing a physical caliphate, it will be in a region suitable to local groups, not back in the Levant, which no longer offers a viable safe haven to militants.

The challenge is compounded by the recent expansion of the Islamic State in Africa and South Asia, which has been accelerating since the collapse of the group's physical caliphate in Syria and Iraq. For the past year, in fact, the group has been expanding into areas such as the Democratic Republic of the Congo and Kashmir. Even a group as sophisticated as the Islamic State, operating on the web and through social media, could struggle to keep such disparate entities operating with common purpose.

Baghdadi oversaw the group's expansion and played a major role in its ability to raise hundreds of millions of dollars and generate a global propaganda network. And while the state is nothing if not resilient, the death of its leader could cause it to suffer greatly, especially in the short term. In a worst-case scenario for its leadership, it may even lose current members to al Qaeda affiliates and franchise groups throughout the world.

Baghdadi's death could also lead to an uptick in Islamic State-inspired attacks in the near term, primarily as a reaction to the news that he was killed by U.S. special operations forces. But over the longer term, the death of Baghdadi could have an attenuating effect on the group's inspirational pull, given the way that Baghdadi specifically resonated with legions of supporters throughout the West and the broader Islamic world. Previous announcements of his death never had this effect, but mostly because these rumors were squashed relatively soon after they spread.

It is not entirely clear how much thought the Islamic State gave to the issue of succession, but when it comes to the long-term survival of the organization and its ability to sustain the allegiance of its provinces abroad and continue to inspire its supporters around the world, choosing the right successor—someone with his own charismatic pull—could be the most important thing it does next.

Colin P. Clarke is a political scientist at the RAND Corporation. He is also a senior research fellow at the Soufan Center. Amarnath Amarasingam is an assistant professor at Queen's University in Ontario, Canada.

This commentary originally appeared on Foreign Policy on October 28, 2019. Commentary gives RAND researchers a platform to convey insights based on their professional expertise and often on their peer-reviewed research and analysis.