Uncovering the Links Between Fires and Public Health in Equatorial Asia 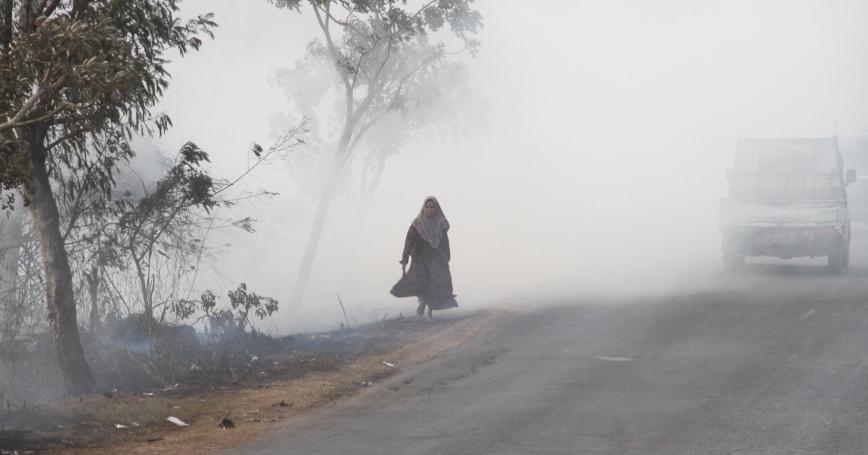 A woman walks along a road covered in smog due to a forest fire in Banjarbaru, South Kalimantan province, Indonesia, September 6, 2019

In 2015, fires in Indonesia blanketed much of the country and the surrounding region in a smoky, dangerous haze. While this period of unhealthy, hazy air was especially widespread—and lingered for several months—high levels of air pollution caused by fires is a recurring issue in Indonesia, including this year. According to our research, the fires, if left unchecked, could cause an average of 36,000 premature deaths annually across Indonesia, Malaysia, and Singapore. However, we estimate that the majority of these deaths—about two-thirds—are avoidable by implementing various land restoration projects.

To understand why the deaths could occur—and how we can reduce them—we first need to understand the relationships between land use, fires, and air pollution. You can't look at just one component of the problem in isolation. So before we built the SMOKE Policy Tool, which models the impact of Indonesian fires on regional public health, we had to create a framework that examines these interconnections.

The Connection Between Fires and Unhealthy Air

Studying the impact of fires on the environment and on public health is complicated because multiple factors are involved. Weather plays a role, since fires worsen during droughts: Indonesia's dry season coincides with the El Niño conditions as well as other atmospheric phenomena. So does anthropogenic land use such as logging or clearing forests for agriculture and plantations. In addition, Indonesia's vast fuel-rich peatland forests are traditionally protected from fire because of the high water table, but when they are drained and degraded, they become highly flammable and can produce high levels of fire emissions.

When fire is used to clear or maintain land, particularly in fuel-rich peatlands, the result is unhealthy haze that has repeatedly plagued the country over the past several decades. This haze is worrisome for public health, since it's what carries toxic particulate matter into people's lungs.

Resources are limited for land restoration efforts to reduce the incidence of fires. One way to prioritize these activities is to determine where the threat of smoke to human health is greatest. That's where we've focused our research, calculating the impact of haze on a population's health. To do this, we've studied land use dynamics with satellite data sets, coupled with how smoke travels in the atmosphere and contributes to air pollution, including in varying weather conditions.

We primarily conducted our analysis in Earth Engine. For example, MODIS fire radiative power (FRP) satellite data, which shows the intensity of fires, was used to map the variability in fire emissions across Indonesia. Land use maps were also used to examine the contribution of fire emissions from various sources, including agriculture, plantations, and degraded forests.

Where to Prioritize Land Restoration Efforts?

Once we examined connections between the variables that affected health outcomes from smoke exposure, we set out to build the SMOKE Policy Tool on Earth Engine. We wanted the tool to answer this question for different decision-makers: Given that some fires are more dangerous to health than others, how can we prioritize where to prevent fires?

The SMOKE Policy Tool allows users to create customized solutions based on various scenarios of interest. For example, they can choose different patterns of fire emissions, variable meteorology data as this can alter smoke transport patterns, and regions of interest (Indonesia, Malaysia, and Singapore).

While peatland fires may be the biggest concern in terms of air quality and public health, they're not the only concern, or the only option for reducing dangerous air emissions. In the SMOKE Policy Tool, users can also examine the implications of reducing fires in oil palm, wood pulp, and logging concession areas, as well as different political boundaries, on health outcomes.

Our scenario also projects that average burning season fine particulate matter concentrations will reach 18 µg/m3 (micrograms per cubic meter) in Indonesia during the fire season from July to October. Over a 10-year period from 2020–2029, we project on average 36,000 annual premature deaths across Indonesia, Singapore, and Malaysia should fires continue at a similar rate as in the past.

Identifying Restoration Projects with the Greatest Impact on Health

Our research team is working to share the SMOKE Policy Tool with local stakeholders to help them quickly visualize and analyze the impact of action taken to reduce the incidence of fires. Team member Tianjia Liu from Harvard University traveled to Jakarta in August 2019 to present the capabilities of the SMOKE Policy Tool to various local governmental decision-makers and nonprofits, including the World Resources Institute (WRI), World Wildlife Fund (WWF), Greenpeace, and the Indonesian Disaster Relief Agency (BNPB). Along with team member Pak Budi Wardhana of the Indonesian Peatland Restoration Agency (Badan Restorasi Gambut; BRG), Tianjia Liu presented the results of the paper, its policy implications, and the SMOKE Policy Tool at a well-attended public dissemination forum hosted by Katadata in Jakarta.

The Indonesian Peatland Restoration Agency (BRG), was one of our partners in the development of the SMOKE Policy tool; the BRG mission is to restore at least 2 million hectares of the country's peatlands. The BRG could use our tool to prioritize sites where rebuilding drainage canals and re-wetting dried-out peat could reduce fires and improve public health. In our research, we found that restoration projects slated for the eastern coast of Indonesia's Sumatra island could have the greatest impact for health, since fires there would be upwind of vulnerable populations.

The benefit of building the SMOKE Policy Tool in Earth Engine is that the tool isn't static. As new data sets become available, we can offer updated models based on changes in population density, land use, and fire emissions, for example. It's our hope that by quantifying how land use decisions impact public health, the tool will help decision-makers use resources to save the most lives.

Miriam Marlier is an adjunct physical scientist at the RAND Corporation. As part of their recently published research on the link between land use management and agricultural fires that impact public health, Marlier and her research colleagues created the SMOKE Policy Tool, built on Earth Engine, which helps decision-makers gauge the impact of efforts to reduce fires in Indonesia.

This commentary originally appeared on Google Earth and Earth Engine on Medium on October 23, 2019. Commentary gives RAND researchers a platform to convey insights based on their professional expertise and often on their peer-reviewed research and analysis.