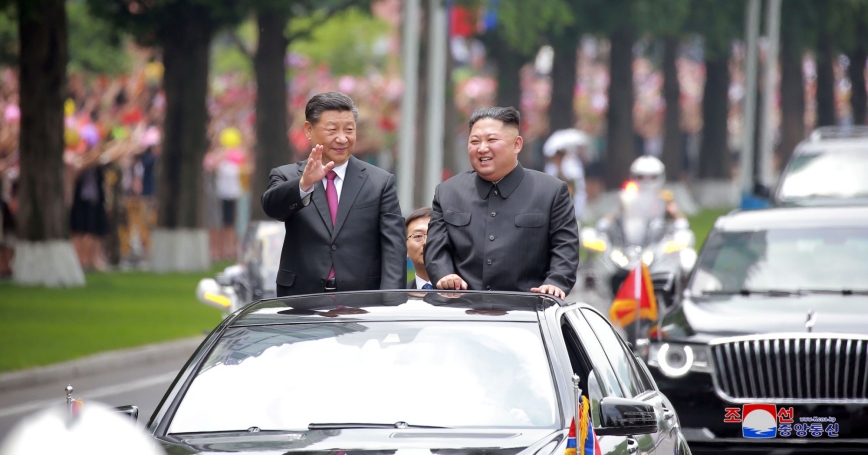 On October 6, North Korea and China marked the 70th anniversary of their diplomatic ties—ties which, according to their leaders, are “invincible,” “immortal,” and have “stood the test of time.”

This grandiose portrayal stands in contrast to the DPRK's description of another immortal issue: the tug-of-war with the United States over its nuclear weapons program. Just one day before the anniversary, U.S.–North Korea working-level talks collapsed in Sweden. North Korea's top nuclear negotiator said afterward that the country had no desire to engage in more “nauseating" negotiations.

These two things are closely connected: When it comes to the balance of power in Northeast Asia, China is signaling to the United States and the rest of the world that Beijing remains a viable counterweight to Washington's influence there. But the United States may find that turning the tables on China—notably with its economic war against Beijing—pays off when it comes to North Korea, too.

In the lead-up to the first U.S.–North Korea summit in Singapore in June 2018, North Korean leader Kim Jong Un traveled to China twice to meet with President Xi Jinping. Shortly after the summit, Kim had yet another meeting with Xi, presumably to provide a readout of the meeting with President Donald Trump and to further coordinate Beijing-Pyongyang policy positions on the nuclear negotiations.

Washington may find that turning the tables on China—notably with its economic war against Beijing—pays off when it comes to North Korea, too.

From these meetings, Kim has brought home the affirmation of DPRK–China ties and the rhetoric of endorsement from the Chinese leader. To Kim, this affirmation, though largely symbolic, sends the message that he enjoys the support of a country considered Washington's counterweight in Northeast Asia.

China can productively leverage its influence there to its own advantage. It can play a critical role in constraining North Korea when needed—coordinating and enforcing sanctions, identifying illicit revenue-generating schemes, and calling out human rights violations, for instance.

Such steps may help Beijing gradually shed its long-held image as an interested bystander turning a blind eye to the DPRK's illicit maneuvers and growing security threat to its regional neighbors.

Beijing's constructive cooperation in support of global efforts to constrain and reduce the North Korean threat could also burnish its own image as a reliable partner in promoting enduring security and stability in the region.

For the United States and other countries intent on the denuclearization of North Korea, dealing with Pyongyang now effectively means having to deal with China when the going gets tough in nuclear negotiations.

Negotiations do remain tough. In his previous meetings with Trump, Kim and his negotiators made it clear that they were not willing to give up even part of their country's nuclear weapons program. Pyongyang has reiterated its year-end deadline for the United States to completely reverse its “hostile policy” in negotiations—essentially threatening to end its moratorium on nuclear and ICBM tests.

Some in Washington optimistically press on for a subsequent round of meetings. Pyongyang, however, is not too subtly telling Washington to produce a new menu of concessions suitable to the Dear Leader's intentions. Meanwhile the Kim regime has shown in recent months that its nuclear and ballistic missile threat is becoming more advanced and thus an ultramodern force to be reckoned with.

An effective mechanism for bending North Korea's will toward denuclearization may be exerting consistent and targeted political, economic, and security pressure on China—through black lists, tariffs, and consistent messaging, for example.

By reining in the behavior of Pyongyang's patron, Washington could weaken the potency of Kim's nuclear weapons and bargaining power.

By reining in the behavior of Pyongyang's patron, the United States could weaken the potency of Kim's nuclear weapons and bargaining power.

But China has a strong hand, too. As China continues to press on in the trade war, its implicit support for Pyongyang's nuclear and missile provocations serve as a reminder to Washington that Beijing continues to hold one of the few keys to influencing and steering Kim's behavior.

Should Washington consider taking a tougher position on trade, Beijing can play the North Korea card to warn that an aggressive U.S. position may adversely impact its ongoing efforts to dismantle Pyongyang's nuclear arsenal.

Nevertheless, diminishing Beijing's relevance, while not a panacea, could pierce Kim's illusion of invincibility and—for once—place him in a bind to make some substantial concessions on the nuclear front.

Soo Kim is a former CIA analyst and currently a policy analyst at the nonprofit, nonpartisan RAND Corporation.

This commentary originally appeared on Nikkei Asian Review on October 18, 2019. Commentary gives RAND researchers a platform to convey insights based on their professional expertise and often on their peer-reviewed research and analysis.