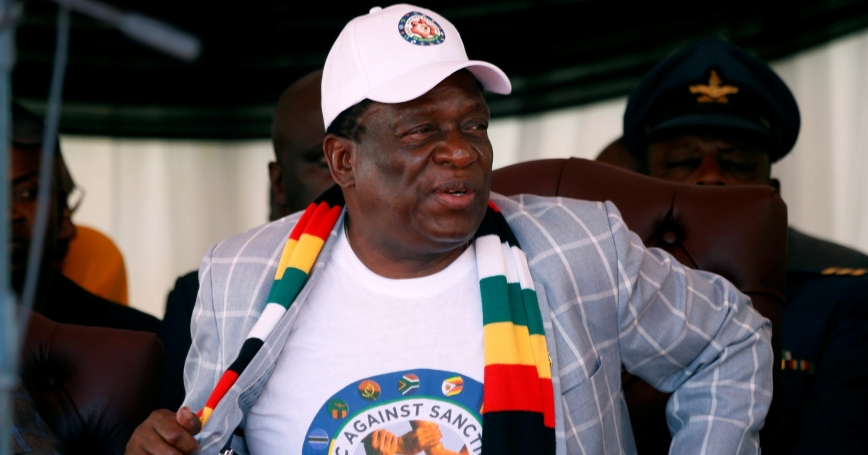 The countries of southern Africa have declared Oct. 25 to be “Zimbabwe Solidarity Day” in protest of Western sanctions. Unfortunately for Zimbabwe's struggling citizens, though, this act of “solidarity” isn't directed at them. It is being offered instead to Zimbabwean President Emmerson Mnangagwa's government, whose human rights abuses and widespread corruption have elicited scarcely a murmur of disapproval from regional heavyweight South Africa or its neighbors.

The leaders of the 16 member countries of the Southern African Development Community (SADC) falsely attribute Zimbabwe's catastrophic economic decline to sanctions imposed by the United States and other Western countries—and they have planned a series of coordinated events and actions to protest those sanctions. In shifting blame to the West, SADC is dismissing the Zimbabwean government's violent misrule and excusing SADC's own refusal to call for genuine political and economic reform in Zimbabwe.

The notion that sanctions are primarily responsible for the economic collapse in Zimbabwe is a useful fiction promoted by that country's authoritarian elite.

The notion that sanctions are primarily responsible for the economic collapse in Zimbabwe is a useful fiction promoted by that country's authoritarian elite. In reality, the ruling party, in power for 39 years, has no one to blame but itself.

Here are the facts on U.S. sanctions. In 2001, the U.S. Congress passed the Zimbabwe Democracy and Economic Recovery Act (PDF) in response to escalating human rights abuses. The law limited U.S. support for debt relief through international financial institutions and encouraged the creation of a sanctions regime targeting “individuals responsible for the deliberate breakdown of the rule of law, politically motivated violence, and intimidation.” Because of Zimbabwe's failure to clear its external debt, the act has never actually come into play.

In 2003, President George W. Bush formally created the sanctions regime through executive order, and it initially targeted individuals undermining democratic processes or institutions. Subsequent modifications have responded to new developments—such as fraudulent and violent elections in 2008—and included individuals responsible for human rights violations and public corruption. Currently, some 85 Zimbabweans and 56 companies (mostly linked to those individuals) are subject to U.S. sanctions, which block any holdings those companies and individuals may have in the United States and prohibit Americans from doing business with them. The European Union employs a similar targeted sanctions regime, though it includes only two individuals and one company. The E.U. has imposed an arms embargo, as well.

But that's it. There are no broad economic sanctions, no nationwide punishments for the country, no crippling outside impositions.

Zimbabwe's leaders have long tried to paint a different picture, twisting the sanctions regimes into a false enemy to blame for the humanitarian and economic crisis that is worsening by the day. The International Monetary Fund estimates that Zimbabwe has the highest inflation rate in the world (though the government banned publication of inflation statistics). The World Food Program says Zimbabwe is facing its worst food insecurity in recent memory. The health-care system is near collapse, with doctors striking over poor pay and working conditions.

None of these problems can be attributed primarily to sanctions targeted at individuals, or to restrictions on international financial support. Rather, the crisis is driven by the government's failed leadership, economic mismanagement and corruption. When Mnangagwa came to power via a military coup in 2017 he promised a new dispensation and warming relations with the West. But his government employs the same brutal tactics used by his predecessor, Robert Mugabe, including violence against political opponents, human rights defenders and civil society activists.

After a recent visit to the country, the U.N. Special Rapporteur on the Rights to Freedom of Peaceful Assembly and of Association, Clément Nyaletsossi Voule, concluded “that there is a serious deterioration of the political, economic and social environment since August 2018 [the date of the most recent elections] resulting in fear, frustration and anxiety among a large number of Zimbabweans.”

t's no secret what Zimbabwe needs: an end to attacks on political opposition and civil society, elimination of repressive legislation, transparent economic management, elections reform and a genuine national dialogue.

Zimbabwe's southern African neighbors have long apologized for the excesses of Mugabe and Mnangagwa. A more fruitful approach would see regional leaders use their public pronouncements and private cajoling to push for much-needed political and economic reforms. It's no secret what Zimbabwe needs: an end to attacks on political opposition and civil society, elimination of repressive legislation, transparent economic management, elections reform and a genuine national dialogue.

Regional leaders could emphasize the need to protect civil society leaders and human rights defenders and offer shelter when those individuals are under attack. They also could seek to limit the flow of funds stolen by Zimbabwean officials through their banks and curtail money-laundering within their borders through real estate purchases and other means.

Zimbabwe would benefit from a clear path toward winding down the sanctions regimes. Fortunately, the country's existing constitution, revamped in 2013 (PDF), provides a useful roadmap with an array of reforms. Simply aligning the country's laws with the constitution would be a significant step in the right direction.

For its part, the Southern African Development Community could choose to work with the United States and other international partners to help shape a path forward along these lines.

Instead, the region's leaders are using their joint advocacy to make an argument with no merit and join Zimbabwe in chasing a false enemy.

Jon Temin is director of Africa Programs at Freedom House. Alexander Noyes is a political scientist at the nonprofit, nonpartisan RAND Corporation. Mark Bellamy is senior adviser for Africa at the Center for Strategic and International Studies.

This commentary originally appeared on The Washington Post on October 24, 2019. Commentary gives RAND researchers a platform to convey insights based on their professional expertise and often on their peer-reviewed research and analysis.