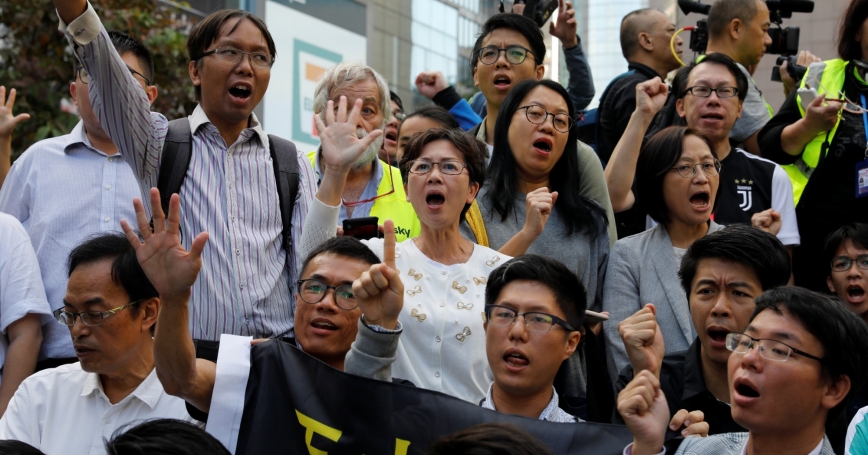 On November 24, Hong Kongers turned out in historic fashion for district elections that resulted in a landslide victory for pro-democracy advocates and their politicians. The importance of this event cannot be overstated. Hong Kong will now be in a position to elect more pro-democracy Legislative Council members next year, and it has embarrassed Chinese leaders who backed pro-Beijing candidates and do not want Hong Kong to have genuine universal suffrage in the first place.

But will it be enough to bring the crisis to an end or is it just a brief respite? Likely the latter. Ongoing trends strongly suggest a steady hardening of positions by both Carrie Lam's government and the protesters. Unfortunately, a single peaceful event can do only so much for a situation in which trust is virtually nonexistent.

Since her decision in September to permanently withdraw the controversial draft extradition law, Lam has refused to acquiesce to the protestors' four remaining demands. These include a full and independent inquiry into allegations of police brutality, unconditional release of imprisoned protesters, genuine universal suffrage, and Lam's own resignation.

Instead of seriously considering ways to meet one or two of the protestors' demands to give them at least a small victory to calm the situation, Lam has focused on the high cost of living in Hong Kong and pledged a new social welfare program to alleviate disgruntlement, insulting the protesters and making them feel ignored. She also dusted off colonial-era emergency power laws to complicate future protests. In October, she curbed freedom of expression by banning face masks—a controversial and extraordinary move that Hong Kong's high court has ruled unconstitutional. Other measures, such as media censorship and curfews, may follow.

Most alarmingly, Lam has shown unwavering support to a police force that has resorted to increasingly aggressive measures. Amid the ongoing standoff between protestors and police at Polytechnic University, which was sparked by a police officer who shot and killed an unarmed student, Lam refrained from disavowing the police comment that they might fire “live rounds” to counter protestor violence.

In addition, this month Beijing appointed a new police commissioner, Chris Tang Ping-keung, who was nominated by Lam. Known as a hardliner against the protests, Tang shares Beijing's perspectives, referring to protestors as “rioters” who engage in acts “very close to terrorism.” He also rejects a full and independent inquiry into the police and refuses to acknowledge any fault by the police in their handling of protesters these last few months. Tang clearly has no interest in negotiations.

Meanwhile, on the protester side, a small but perhaps growing minority of activists have decided to break with using purely peaceful means to express their dissatisfaction. Students at the Polytechnic standoff, for example, have hurled petrol bombs and shot arrows at police. In one particularly egregious incident in October, someone slashed a police officer in the neck with a box cutter. In August, activists at the airport attacked a man they believed was an undercover police officer and attempted to block medical support. And protesters have vandalized numerous stores and burned down subway entrances around the city. Although mainstream peaceful protesters may be turned off by such bad behavior, the hardcore activists seem to have embraced such tactics as more passive forms of resistance have so far been comparatively ineffective.

To complicate matters further, China is digging in, too. Chinese President Xi Jinping in November met with Lam to signal Beijing's support for her as chief executive and her government's response. This essentially eliminated the possibility that Lam would resign—one of the protesters' four remaining demands.

Beijing refuses to allow Hong Kong to descend into total chaos, which might threaten its management of Hong Kong under the “one country, two systems” approach.

Moreover, Beijing in the past few months has quietly doubled the number of military personnel at its Hong Kong garrison and broadcast anti-terrorism and anti-riot training by security personnel across the way in Shenzhen. There are rumors that Beijing is pushing stricter laws in Hong Kong. And Chinese leaders almost certainly authorized plain-clothed anti-riot officers this month to clean debris in Hong Kong's streets to demonstrate that Chinese military forces would not necessarily require permission from the local government to play a role in future unrest. The bottom line is Beijing refuses to allow Hong Kong to descend into total chaos, which might threaten its management of Hong Kong under the “one country, two systems” approach.

And then there is the United States. In the past few years, Washington has soured on U.S.–China relations, and in the current context, just passed the Hong Kong Human Rights and Democracy Act to support the protesters and punish Chinese violations of human rights. Beijing has urged President Trump to veto the bill on the grounds that Hong Kong is an internal matter. But it was passed with a veto-proof majority and thus is highly likely to become law. The message is clear: Washington supports the protesters against Beijing. In a worst-case scenario, this could lead to a showdown in Hong Kong between great powers.

Whatever fate awaits Hong Kong, the trend lines these days leave little reason for optimism. Hong Kong is becoming an increasingly violent and polarized place that might prompt Chinese military action, and the crisis has opened a new wound in U.S.–China relations. The best hope is that the November 24 election reminds all sides why Hong Kong is worth saving. A series of such moments could help.

This commentary originally appeared on The Hill on November 27, 2019. Commentary gives RAND researchers a platform to convey insights based on their professional expertise and often on their peer-reviewed research and analysis.