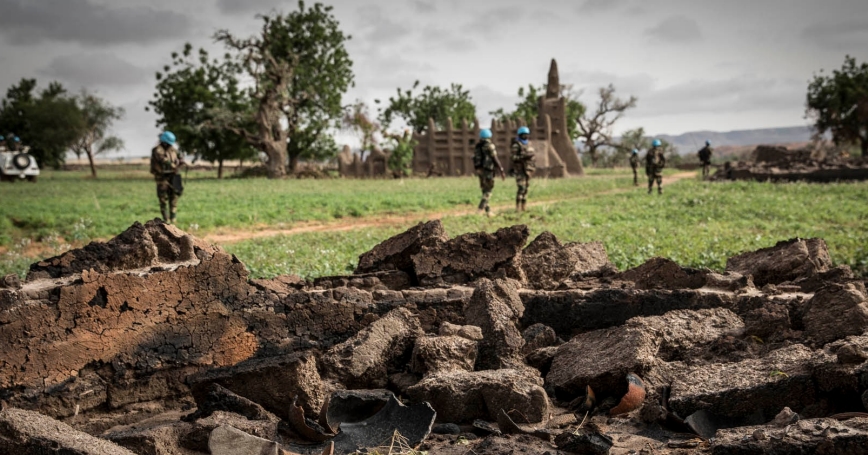 Senegalese peacekeepers during a military operation in the Mopti region of Mali, July 5, 2019

A deadly attack on a Malian army base Friday, November 1st that left 54 Malian soldiers dead and an IED strike the next day that killed a French soldier, have brought home an inconvenient truth: Al Qaida and ISIS-affiliated militants in Mali and neighboring Burkina Faso and Niger are getting stronger. Each year brings more violence and in more places. Mali and Burkina Faso are rapidly destabilizing; the situation in Niger is less dire, but that is hardly a commendation.

The question is why the violence is getting worse given the significant efforts by the international community to stem it? France in 2013 sent roughly 4,000 troops into battle in Mali to clear radical Islamists from the country's northern half. Today, 3,500 backed by fighter jets and attack helicopters remain in the region. The United Nations keeps 15,000 troops in Mali as part of a peacekeeping mission there (MINUSMA), while the European Union runs two training missions for Malian security forces (EUTM and EUCAP). Both French and U.S. Special Operations Forces have been active as well—a fact brought home to the American public in October 2017 when four U.S. soldiers lost their lives in combat in Niger. There reportedly are two U.S. drone bases in Niger, where France also operates a fleet of Reaper drones. In addition, France, the United States, and many other governments have been running dozens of projects ranging from security sector reform to agricultural programs, all intended to foster development, improve governance, and boost the performance of local security forces. Yet it all appears to be in vain.

Why is the violence getting worse given the significant efforts by the international community to stem it?

What began in 2003 as a seemingly manageable terrorist problem that spilled over from Algeria's civil war has evolved. It has become something much larger and more difficult than what regional governments can handle and what current international interventions are designed for. It is now a broad insurgency or set of insurgencies on the part of some segments of some ethnic communities. Large swaths of Mali and Burkina Faso are in the grip of a vicious circle wherein violence by one group against another generates violent reactions and the spread of violence. All this has been taking place in the absence of the state, or worse, with the state making everything worse by sponsoring local ethnic “self-defense” militias associated with certain communities and essentially licensing them to prey on others. In this context, radical Islamism is both a symptom and a cause; it provides individuals and communities hoping to advance their interests and/or settle scores with rallying cries and an ideology that channels resentments and mobilizes action.

Local security forces simply are not up to the challenge of conducting counterinsurgency campaigns. They lack the training and often the motivation, not to mention material resources. They are more likely to terrorize local populations and thereby foster insecurity rather than the opposite. Their governments are not up to the challenge of engaging in the kind of nation building that long-term security requires, at least not quickly. As for the international forces present, France's Operation Barkhane and MINUSMA, they are tailored for a more limited fight, namely one against a few terrorist groups. The French, for example, reportedly focus primarily on going after high- value targets while also engaging in a game of whack-a-mole on a grand scale. But they refuse to engage in counterinsurgency or even just impose order, not wishing to arbitrate among warring communities or otherwise act as a colonial power. In any case, the French would have to dedicate vastly greater resources to make much of a difference. They are stuck. If they leave, everything probably will get a lot worse, fast, but currently, the best they can do is hope locals will sort out their own problems and wait for the emergence of significantly more capable local security forces. With each defeat at the hands of radical Islamists, that day seems ever more remote.

Americans might be comforted by France's willingness to take the lead in this fight. But it would be naïve to think that the disintegration of any large part of Africa will not hurt American interests. Moreover, the entanglement of a close ally—arguably our most militarily capable ally—means that Americans might one day wish French forces were available elsewhere.

The region could become another Afghanistan—a staging ground from which international terrorists might strike. More probably, growing violence will fuel migration, which will put further stress on neighboring countries, as well as on our NATO allies in Europe. The closer the violence gets to more populous areas, the worse the effects are likely to be.

“Victory” over radical Islamists in the Sahel seems implausible at this point, but there is room to believe that if the international community stepped up and improved its training efforts, the situation might improve. Massacres like the one on November 1st are preventable. Better prepared soldiers might also behave better toward local populations, and stronger morale may yield other dividends as well.

This commentary originally appeared on RealClearDefense on November 21, 2019. Commentary gives RAND researchers a platform to convey insights based on their professional expertise and often on their peer-reviewed research and analysis.