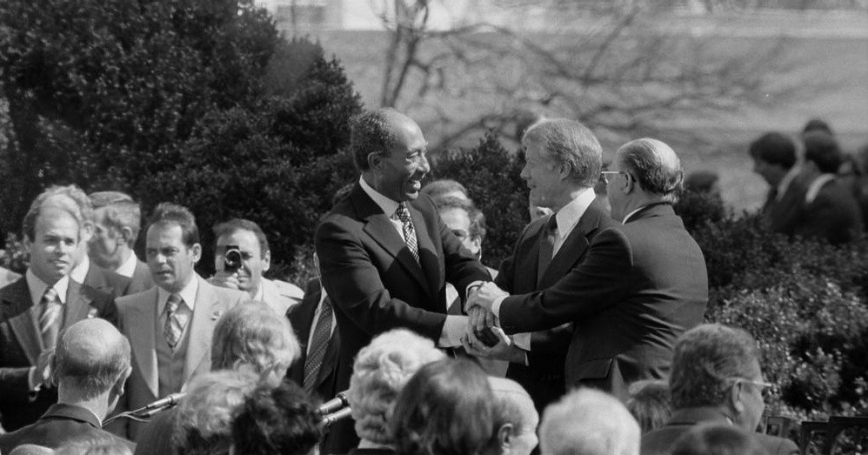 On March 16, 1977, just two months into his administration, President Jimmy Carter declared his support for establishing a “homeland” for the Palestinians. The unscripted announcement, issued during a town hall in Clinton, Massachusetts, marked a stark departure from the United States' traditional treatment of the Palestinian question as a humanitarian, rather than political, matter.[1] Yet, this was only the beginning of Carter's envisioned shift toward a new multilateral peacemaking approach that called for the inclusion of Palestinian representatives and direct engagement with the Soviet Union. Carter, as Jørgen Jensehaugen demonstrates in Arab-Israeli Diplomacy Under Carter: The United States, Israel, and the Palestinians, entered office determined to secure a comprehensive settlement of the Arab-Israeli conflict—one he hoped would address all of the parties' outstanding grievances, defuse a persistent source of instability in the Middle East, and help reduce Cold War tensions.[2]

The final agreements Carter oversaw, however, bore little resemblance to the vision that he had outlined in Massachusetts. The 1979 Egyptian-Israeli peace treaty, as well as the Camp David Accords that preceded it, were momentous diplomatic achievements, but they stopped well short of Carter's initial ambitions. Carter's success, Jensehaugen notes, belied a sad irony: “he had attempted to break with traditional U.S. policy but ended up fulfilling the goals of that tradition, which had been to break up the Arab alliance, side-line the Palestinians, build an alliance with Egypt, weaken the Soviet Union and secure Israel.”[3]

In this slim but comprehensive history, Jensehaugen seeks to explain why the Carter administration, which “went further than any previous U.S. government in pushing the Palestine question to the fore,”[4] ultimately reverted to a policy that excluded Palestinian representatives, shut out the Soviet Union, and stopped short of securing a Palestinian homeland. Drawing on extensive research in U.S., British, and, to a lesser extent, Israeli government archives, Jensehaugen reconstructs the Carter administration's “Rubik's-cube diplomacy,”[5] swiftly guiding readers through Secretary of State Cyrus Vance's early 1977 trip to the Middle East, the White House's ill-fated effort to open back channels to the Palestine Liberation Organization (PLO), Egyptian President Anwar Sadat's historic visit to Jerusalem, the Camp David negotiations and the ultimate signing of an Egyptian-Israeli agreement, and the faltering effort to encourage parallel talks on Palestinian autonomy. What results is a meticulous autopsy of Carter's vision for a comprehensive settlement and a valuable contribution to a burgeoning effort to reevaluate the president's human rights legacy.

From the beginning, Jensehaugen demonstrates, Carter's plan for a comprehensive agreement faced formidable obstacles. American domestic forces, including a reticent Congress and well-organized interest groups, resisted the president's efforts to pressure Israel and reinforced an established U.S. policy that restricted official contact with the PLO. Well aware of these domestic constraints on the White House, Israeli Prime Minister Menachem Begin, who replaced the more sympathetic Yitzhak Rabin shortly after Carter's pronouncement in Massachusetts, embraced a hardline position on Palestinian representation, settlement construction, and Israel's claim to the West Bank and Gaza. The threat of an Egyptian withdrawal from the process might have prompted Begin to moderate his position had not Sadat, determined to cement an alliance with the United States and defuse tensions with Israel, proved ambivalent toward Palestinian interests. Meanwhile, worsening divisions within the Arab camp and dissension within the Palestinian movement undermined regional leaders' willingness to gamble on an uncertain process. And all the while, the dissolution of détente, economic crises at home, and the emergence of new crises in Iran and Afghanistan tugged at the president's attention, weakening his resolve to see the negotiations through. No factor alone pre-determined the outcome of the negotiations, but together, Jensehaugen argues, they limited Carter's chance of securing a comprehensive agreement.

Still, Jensehaugen contends that the Carter administration's strategic errors were the most critical for the comprehensive approach's ultimate failure. By October 1977, it was already apparent that Israeli intransigence and “the disinclination of the Arab states to agree amongst themselves” made substantive discussion of Palestinian representation at future negotiations nearly impossible.[6] But “the problem was compounded by the fact that Carter was unwilling to invest the political capital required to confront Israel” over the major stumbling blocks: direct U.S. communication with the PLO, settlement construction in the West Bank and Gaza, and Palestinian representation at an eventual international conference.[7] “The idea behind the comprehensive peace was founded upon a break with previous U.S. approaches,” Jensehaugen points out, “but Carter was unwilling to break with the political restrictions which had shaped the previous approach… Carter was working for a comprehensive peace but unwilling to fully activate a comprehensive approach.”[8] Unable to break free of this “straitjacket,”[9] Carter missed the opportunity to take advantage of a temporarily 0favorable balance within the Palestinian leadership and was forced to accept the lesser prize of a bilateral Egyptian-Israeli agreement.

What Was Going On Inside the Carter Administration?

Why did Carter not press the Israelis further? Here, Arab-Israeli Diplomacy Under Carterintroduces more questions than answers. Jensehaugen highlights multiple missed opportunities when Carter and his advisers could have demanded concessions from Begin or his deputies but instead chose to push Arab leaders to concede to Israeli demands. In part, this was the product of American officials' perception that the latter option marked the path of least resistance (a gamble seemingly validated by Sadat's eager cooperation). Yet, Jensehaugen also emphasizes that domestic calculations, whether a concern for congressional or public opinion (two forces the author, at times, conflates), forced Carter to retreat at each opportunity.

Precisely how the Carter administration integrated domestic factors into its foreign policy decision-making is often assumed rather than explained.[10] With rare exceptions, Arab-Israeli Diplomacy Under Carter is more concerned with the administration's actions than its internal deliberations, a decision that allows the book to move swiftly through the complex negotiations but leaves readers with little insight into how American decision-makers defined or chose between their various options. This perspective would have been particularly valuable because of Carter's reputation as a president who resisted his advisers' pleas to consider popular or congressional opinion, particularly on matters of foreign policy. This, after all, was a man who ran for his Georgia Senate seat despite physical threats from the local political establishment; advocated for radical energy reforms despite extraordinary resistance from Capitol Hill and corporate lobbies (and almost no support from the general electorate); and expended extraordinary political capital on the Senate battle to ratify the Panama Canal Treaties, along with other contentious issues like civil service restructuring.[11] Indeed, Jensehaugen ascribes Carter's initial willingness to rethink U.S. policy toward the Palestinians to his status as a “political outsider.”[12]

Why, then, was Carter so cautious on this issue—one which Jensehaugen maintains the president viewed as a “strategic necessity” for his administration?[13] Here, more detailed discussion of the administration's other legislative priorities and the activity of pro-Israel interest groups—which are ascribed significant influence over the administration's policy at various points in the book but whose activities are described only briefly—would have deepened readers' understanding of the potential risks and trade-offs. The book's brief section on the administration's contentious 1978 “package” airplane sale to Egypt, Israel, and Saudi Arabia might also have provided an opportunity to discuss the administration's relationship with Congress in greater depth.[14] Why was the president willing to fight over this dimension of his peacemaking strategy but not others? Who were the White House's allies on the Hill? Could the administration have sold a more confrontational policy to Congress or the American public?

The possibility of a different outcome is a key theme throughout the book, albeit only implicitly. Jensehaugen has a sharp eye for moments when the Carter administration might have used its “leverage” to soften Israel's negotiating stance, and he bemoans Carter's failure “to utilize his full political toolset.”[15] Yet, whether U.S. officials recognized the extent of their potential influence is unclear. Without a consistent view into the administration's internal deliberations, it is difficult to determine whether the proposed options—imposing conditions on U.S. military sales or economic aid; a suspension in military assistance; a public statement chastising the Begin government—were identified and debated by policymakers at the time and, if so, why they were discarded. In discussing Begin's request for economic aid to counterbalance the cost of withdrawing from Sinai, for instance, the author notes that “Carter clearly had it [leverage], but despite his deep frustration with Begin, he declined to use it.”[16] But whether Carter himself recognized the opportunity and, if so, why he chose to let it pass, is not articulated

As a result, readers might leave the book with two very different assessments of American influence in the Middle East. On the one hand, Jensehaugen implies that Carter could have overcome tremendous domestic and international pressure and forced a comprehensive settlement if he had only had the political will and savvy. On the other hand, the author's insightful analysis of the regional negotiations—particularly in the year preceding Camp David—illustrates how the other parties pursued interests independently of (and at times in direct conflict with) Washington's wishes. Jensehaugen persuasively demonstrates that the Carter administration's achievements fell far short of the president's initial ambitions. But whether the president could have acted quickly enough to seize the fleeting opportunity is less clear.

Nonetheless, Arab-Israeli Diplomacy under Carter is a valuable addition to the literature on American peacemaking efforts, one that deepens our understanding of the difficult choices future administrations will confront in their effort to defuse the Arab-Israeli conflict. The virtue of Jensehaugen's book lies in the author's ability to toggle between multiple perspectives and to explain the compounding effect of conflicting domestic, regional, and international pressures. Expert and student readers alike will benefit from his ability to cogently and concisely distill the complex negotiations. Indeed, in the end, Jensehaugen's assessment of the Carter administration's negotiating strategy is simple: “the Americans were out of tune with their own ambition.”[17]

Alexandra T. Evans is an associate policy researcher at the nonpartisan, nonprofit RAND Corporation. She received her Ph.D. from the University of Virginia and is at present completing a diplomatic history of the Reagan administration's intervention in Lebanon.

This commentary originally appeared on Texas National Security Review on December 19, 2019. Commentary gives RAND researchers a platform to convey insights based on their professional expertise and often on their peer-reviewed research and analysis.