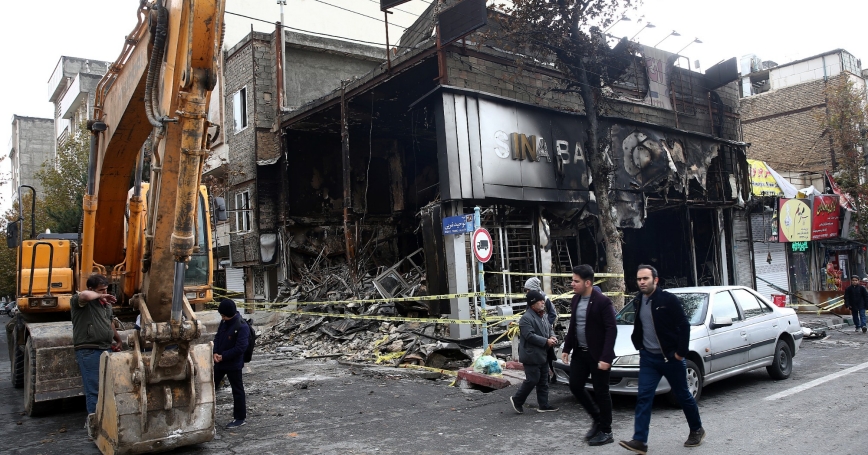 People walk near a burned bank, after protests against increased fuel prices, in Tehran, Iran, November 20, 2019

At midnight on Friday, Nov. 15, the Iranian government attempted to quietly overturn years of policy by revoking longstanding gasoline subsidies. It didn't work. When Iranians woke at dawn and found that gas prices had risen by 50 percent, thousands of people in 100 cities and towns took to the streets in protest. Surprised by the intensity of the backlash, the regime quickly responded with force, unleashing security forces and cracking down on demonstrators. The next day, the regime shut down the internet. When service was restored days later, reports of brutal killings and arrests came to light. In a matter of days in November, thousands had been arrested and hundreds killed. Regime officials denied responsibility. Rather than showing a united front, they quickly turned on one another.

Iran's protests—coupled with a surprise prisoner exchange with the United States over the weekend—could mark the beginning of a new chapter in Iran's domestic politics. The recent demonstrations were more widespread and the response to them much more swift and violent than in previous decades. In fact, the regime's legitimacy has not been challenged this forcefully since the 2009 Green Movement—and the implications for Iran's domestic politics are many. Whatever happens inside the country, though, it will not likely change Iran's foreign policy, which means that there is little hope that a period of constructive engagement between the two countries will follow the chaos as Americans prepare to enter an election year.

On the eve of the protests, Iran's rulers seemed more cohesive than ever. For several months, the “maximum pressure” campaign against the country waged by U.S. President Donald Trump's administration, a policy mostly centered on political pressure and economic sanctions, had brought the regime's power centers and political blocs together.

But that is no more. Soon after protests began, Iran's supreme leader, Ayatollah Ali Khamenei, who for decades has opined about affairs both public and private, foreign and domestic, declared that he had merely followed the advice of “experts” on adjusting the fuel subsidies. President Hassan Rouhani, whose input would have been critical to the subsidy removal plan, claimed ignorance about the timing of the measure. Rouhani's claim was promptly contradicted by the parliament's speaker, Ali Larijani. Larijani has since announced he won't be seeking reelection to his post, fueling suspicions that he will be running instead to replace Rouhani come 2021, when Rouhani's second and (by the terms of the constitution) final term comes to an end. Meanwhile, there were rumblings of impeaching Rouhani for keeping the legislature in the dark about the coming subsidy change, and the government came under fire for being complicit in if not responsible for the killings of protesters.

These divisions provide the backdrop for Iran's election season. On Dec. 1, contenders began to register their candidacies for parliamentary elections to be held in February 2020. More infighting than usual is sure to ensue—especially over Iran's foreign policy under Rouhani, the state of the country's economy, and social matters. Hard-liners and conservatives are likely to continue arguing that Rouhani's naiveté when it comes to Western (and, especially, U.S.) intentions has put the country on the path of devastation. Moderates will have to defend a largely empty legacy, one dominated by the failure of the nuclear deal, a free-falling economy, and a checklist of unfilled promises on nearly all other fronts. And all sides will point to the popular discontent as a sign that their political opponents' approach isn't sustainable.

Iranian officials may be divided on domestic matters, but they believe that displaying those fissures abroad would provide ammunition to those who want to target the regime.

The United States may hope that the protests and infighting would bring the regime back to the negotiating table to conclude what the administration hopes would be a better deal than the nuclear agreement signed in 2015. After all, Iranians' economic grievances stem in part from American sanctions. If Iran's rulers want to stabilize the situation at home and prevent further turmoil, shouldn't they bite the bullet and resume talks?

Still, although regime officials may be more divided than they have been in months on domestic matters, they believe that displaying those fissures abroad would only provide ammunition for those who want to target the regime. Instead, the regime could double down on more aggressive action against the United States and its partners, casting them as a foil to thwart further opposition in the streets.

Most signs already point to this trend. To be sure, over the weekend, the United States and Iran managed to settle a dispute diplomatically for the first time during the Trump presidency. Iran released a U.S. scholar it had held hostage, and the United States returned an Iranian scientist accused of violating U.S. sanctions law. Iranian Foreign Minister Javad Zarif then took to Twitter to signal that his country was now ready for a “comprehensive prisoner exchange,” noting that “the ball is in the U.S.' court.”

Although this first exchange serves as a much-needed confidence-building measure and can show the two sides that stepping away from maximalist positions can pave the path for win-win outcomes, there's little change elsewhere in the two countries' policies for now. The United States has stated that it will be imposing more sanctions on Iran and, even as the two sides were finalizing the prisoner exchange, Iran dialed up pressure of its own.

Soon, Tehran is reportedly going to unveil new advanced centrifuges, further decreasing its adherence to the 2015 nuclear deal (which Washington left in 2018) and forcing Europe to also take a harsher stance, bringing it closer to the U.S. position. In the region, after a few quiet months following attacks on Saudi Aramco oil infrastructure, Iran and the militias it backs in Iraq seem to be preparing themselves for a potential uptick in activity. And although the Iranian economy is clearly hurting, the regime's defense spending is likely to increase if the government's proposed budget is put in place in time for the upcoming Iranian year, providing the Revolutionary Guards with more funds for their activities.

It may be appealing for Washington to begin patting itself on the back for the latest developments in Iran and look forward to a return to the bargaining table. For now, that seems unlikely, even if the United States continues to dial up pressure. Instead, as the regime grows more concerned about perceived internal and external threats to its existence, it may choose a far more troubling path: more hostility. The United States should be prepared for more violence and human-rights violations by the regime in Iran and abroad. And the administration should be ready for a potential resumption of tensions similar to the spring and summer—when forces allegedly backed by Tehran attacked oil production facilities and shipping on a number of occasions and made life more complicated for U.S. forces in Iraq—events that brought the United States and Iran to the brink of military exchange.

Ariane Tabatabai is an associate political scientist at the nonprofit, nonpartisan RAND Corporation and an adjunct senior research scholar at Columbia University. She's the author of the forthcoming book “No Conquest, No Defeat: Iran's National Security Strategy.”

This commentary originally appeared on Foreign Policy on December 10, 2019. Commentary gives RAND researchers a platform to convey insights based on their professional expertise and often on their peer-reviewed research and analysis.