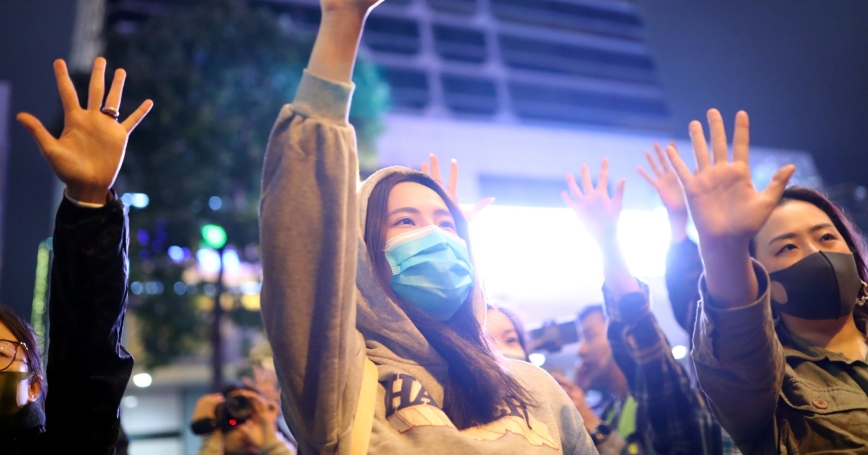 After six months of escalating police violence and protester resistance, matters in Hong Kong have come to a head in the past two weeks. Widespread police brutality, including indiscriminate and dangerous use of tear gas, live ammunition, the arrest of approximately 2,500 people (including more than 750 minors), and raids on university campuses spurred a massive turnout at recent elections, with seventeen out of eighteen district councils going to the pan-democrat camp.

With Hong Kong Chief Executive Carrie Lam signaling she still won't meet the protesters' demands and is under no pressure from Beijing to step down, the possibility exists that matters may escalate further. At least one report has suggested that the People's Republic of China (PRC) is preparing to take a more direct hand in efforts to quell the protests, with the potential for fueling, rather than tamping down, further violence. If that happens, American persons, property, interests, and values in the city would likely be negatively affected, U.S.–China relations may worsen further, and the pathway to ending the two countries' trade war could become much more complicated.

Now that the U.S. Congress has passed the Hong Kong Human Rights and Democracy Act (HKHRDA) and sent it to President Donald J. Trump for his signature, what additional steps could the Trump administration consider in order to reduce the prospect of a resurgence in violence?

What steps could the Trump administration consider in order to reduce the prospect of a resurgence in violence?

The core problems in Hong Kong, as Michael Davis and Victoria Hui have argued, stem from an unresponsive Hong Kong government, an unaccountable police force that has employed widespread violence and overlooked triad assaults on government critics, and Beijing's erosion of the city's freedoms.

With respect to U.S. policy goals, there is widespread agreement on the need for Beijing to abide by the 1984 Sino-British Joint Declaration (PDF) and the “one country, two systems” formula while resolving differences among the city's various parties peacefully and respecting the human rights and rule of law for which the city is known.

In furtherance of such goals, there are at least four approaches the United States might consider, including continuing to engage with the people of Hong Kong; sending clear signals to Beijing that the United States cares about the issue of Hong Kong on its own terms; signaling that violence by Beijing or its agents would have severe consequences for the broader relationship; and developing a common position with like-minded partners so as to dissuade any Chinese temptation to crush the protests using the People's Liberation Army or the People's Armed Police.

First, the U.S. Consulate-General in the city should continue to collect information about, provide analysis of, and communicate U.S. policy to the people of Hong Kong. Americans' concern for and support of the human rights and legitimate interests of the people of Hong Kong has served as a source of succor and inspiration to protesters as they strive to hold their government to account. Consul-General Hanscom Smith could continue to engage widely with all levels of society so as to ensure that Hong Kongers know firsthand from America's top official in situ the concerns the United States has for their well-being.

Second, the United States should consider reaching a determination on its policy toward Hong Kong independent of the ongoing U.S.–China trade war. Beijing will not cut a better deal based on any U.S. decision to downplay support for the protesters and will regard such a move as a sign of weakness and as an instrumental, as opposed to a genuine, commitment to human rights.

Third, the U.S. government has authorities under the HKHRDA and the Global Magnitsky Act (PDF) that enable it to sanction officials engaged in “extrajudicial killings, torture, or other gross violations of internationally recognized human rights.” Should evidence come to light implicating Hong Kong or Chinese officials in such activities, the U.S. Department of Treasury is authorized to identify such individuals, freeze their assets in the United States, and deny them entry into the country—and should consider doing so. At the same time, President Trump and Secretary of State Mike Pompeo could make clear to Beijing that any trans-border use of force by China to crush the protests would surely fail, and would result in a catastrophic impact on bilateral U.S.–China relations at the broadest levels.

Finally, while it will ultimately be the people of Hong Kong who will shoulder most of the burden for defending their freedoms and rights, the United States should consider working to build a common position with its allies and partners, including Australia, Canada, the European Union, Japan, Taiwan, the United Kingdom, and others who have spoken out, to signal to Beijing that the costs of repression would be unacceptably high. Now is the time for Washington to keep faith with its friends, its values, and its interests and ensure that all sides know that the United States stands together with peoples struggling for freedom, democracy, dignity, and the rule of law.

Scott W. Harold is a senior political scientist at the nonprofit, nonpartisan RAND Corporation, and an affiliate faculty member at the Pardee RAND Graduate School.

This commentary originally appeared on Council on Foreign Relations on November 27, 2019. Commentary gives RAND researchers a platform to convey insights based on their professional expertise and often on their peer-reviewed research and analysis.