How Will Iran Respond to Soleimani's Killing—and Where Will the Escalation End? 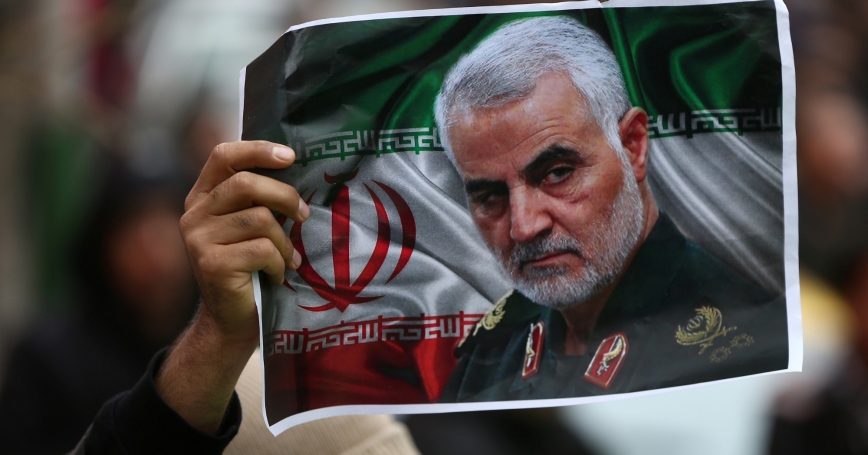 A mourner holds a picture of late General Qassem Soleimani as people gather to mourn him in Tehran, Iran, January 4, 2020

After the U.S. drone strike last week that killed powerful Iranian Maj. Gen. Qasem Soleimani, many thoughtful analyses have discussed what might come next. Response is inevitable, but the “severe revenge” promised by the Iranian regime is likely to be served up cold. Much of the analysis thus far expects the regime to retaliate as it normally does, relying on methods that do not leave fingerprints. But the significance of targeting Soleimani, who led the elite Quds Force unit of the Islamic Revolutionary Guard Corps, may cause Iran to deviate from its traditional playbook. In weighing the costs and benefits of its decision to act, the United States should have prepared to deal with such contingencies.

Iran will calibrate meaningful redress with its desire to not provoke a hot war with the United States. But Tehran also will seek to consolidate its gains and move the regional status quo in its favor after the crisis moment passes. It already is positioning to hit several objectives: raising the cost of U.S. policy (in Iraq and on the nuclear file) without drawing international ire onto itself.

That means the United States should be prepared for the eventuality that Iran's response may not be what we expect.

Consolidating Gains in Iraq and with the Nuclear Deal

Months of protests in Iraq and Lebanon featured both implied and overt anti-Iranian sentiment. These are now overshadowed by a focus on the United States' actions. The protests that roiled Iranian cities and unnerved the regime in late 2019, leading to hundreds of fatalities, have been displaced with images of large crowds mourning Soleimani in the streets.

The United States should be prepared for the eventuality that Iran's response may not be what we expect.

As it did in Syria—after the United States abandoned its Kurdish partners—Iran will seek to cash in its sudden gains in Iraq. Iraq's politicians and clerical leadership have condemned the Soleimani killing, with a limited but loud quorum in the Iraqi parliament recommending that U.S. forces be requested to leave the country. This episode has remade the U.S. relationship with Iraq, perhaps irrevocably and probably in Iran's favor.

As expected, Iran promptly announced that it was suspending several other commitments under the 2015 nuclear deal negotiated with world powers. Tehran no longer considers itself bound by the restrictions, including on uranium enrichment levels, the number of centrifuges installed and operated, uranium stockpiles, and research and development pertaining to enrichment.

But of equal significance is what Iran chose not to do. It didn't withdraw from the deal, and it even made it clear that it wouldn't end or reduce its cooperation with international inspectors. Such steps, along with increasing enrichment to the more dangerous 20 percent, may be reserved for later.

Iran's response will probably look nothing like all-out war. The regime is much too concerned about its own survival to risk that. Instead, in the coming weeks and months, Tehran will focus on significant actions that fall just short of direct conflict. That is why it was so crucial that U.S. policymakers actually planned deliberately for the second- and third-order effects following Soleimani's killing. These include attacks on Americans and U.S. interests: its partners, the global economy and the region's citizens. Given the administration's narrative over the past 48 hours, we fear such deliberate review of the various contingencies was absent.

Iran's playbook is well-established and relies on tools that allow it to offset its lack of a nuclear deterrent and conventional capabilities. The greatest immediate risk is to U.S. military and civilian personnel in places such as Iraq, Afghanistan and throughout the region.

The Iranian regime could also conduct attacks like those we saw over the past six months: at sea against oil tankers or other vessels, against gulf partners' oil infrastructure as well as other key targets in the region, and significant cyberattacks targeting the United States' infrastructure, financial and other systems. It could also include attacks against Israel from Syria or, less likely, from Lebanon.

How Iran May Adapt to the New Uncertainty

These time-tested tactics face new degrees of uncertainty, however. The U.S. decision to target Soleimani—at this moment—was a game-changer that departs from the established escalatory pattern between the two nations. Tehran may adjust its calculations and actions accordingly. Equally, Iran wants to maintain uncertainty about how far it might go in its retaliation, using a range of possibilities to unsettle U.S. and regional policy.

Iran wants to maintain uncertainty about how far it might go in its retaliation, using a range of possibilities to unsettle U.S. and regional policy.

Iran has at its disposal a number of high-impact options that do not fit squarely in its tested playbook. These aren't as likely as the first category of potential responses, but they are plausible given recent Iranian actions. Through the escalation cycle of the past year and a half, Iran has kept pushing the envelope on its provocations, with unexpected precision and crossing lines it has not tested in recent years.

If Iran wanted to innovate in its response, it could, for example, take terrorist-like actions outside the Middle East. The Quds Force and its proxy networks extend beyond the region to South and East Asia, Latin America, Africa and more. Coordinating and executing such efforts would be challenging, but Iran has shown itself capable of such actions: It has had terrorist plots foiled in Europe, Africa and Asia in recent years and successful ones elsewhere. Through its proxies, the Iranian regime could expand its targets to include U.S. companies and civilians abroad—in addition to U.S. forces and diplomats. Pursuing targeted assassinations and kidnappings is not unfamiliar to the Quds Force.

Soleimani's death will reverberate in the region for a long time. In the meantime, the United States has started a proverbial game of chicken with Iran, one in which Iran might feel comfortable expanding its retaliatory responses over a lengthy period. The United States must know its end game and be able to respond to this changing landscape of its own making. It will need to do so without stumbling into another full-fledged conflict that the Trump administration itself, Congress, and the American people have said they do not want. And with limited international support and no apparent diplomatic off-ramps.

Elisa Catalano Ewers is an adjunct senior fellow at the Center for a New American Security and a former U.S. government official. Ariane Tabatabai is an associate political scientist at the nonprofit, nonpartisan RAND Corporation and an adjunct senior research scholar at Columbia University.

This commentary originally appeared on The Washington Post Monkey Cage Blog on January 7, 2020. Commentary gives RAND researchers a platform to convey insights based on their professional expertise and often on their peer-reviewed research and analysis.