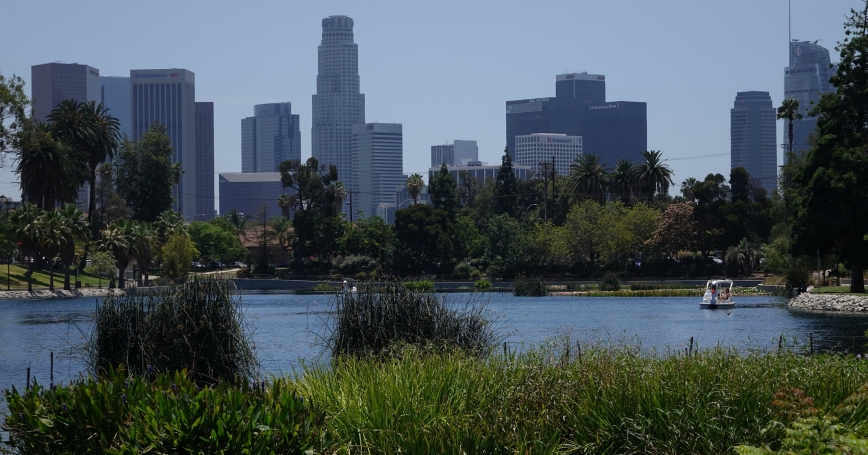 Echo Park Lake with the Los Angeles skyline in the background, July 12, 2018

Visitors to the 2028 Los Angeles Olympic Games are impressed—and not just by the athletics. Los Angeles has transformed into a paragon of sustainability by investing in pioneering green infrastructure and innovative urban planning. The Los Angeles River, once a concrete misnomer, is now alive with native flora and fauna, surrounded by bike paths and parks. Streets everywhere show signs of low-impact development (LID). LA's new Decentral Park, a series of parks with green infrastructure for enhanced stormwater capture and water quality benefits, spreads throughout the city.

Or at least that's what visitors could be impressed by. Los Angeles has an opportunity to reinvent itself by harnessing the collective spirit of Olympics development, climate activism, and Measure W funding. No single project can address all of LA's environmental needs, from drought resilience to decreased dependence on far-away water to reduced greenhouse gas emissions. Rather, engaging in many diverse projects could provide an opportunity for synergies and to create a new “city feel,” the way palm trees, traffic, and movie-touting billboards do now.

Prior Los Angeles Olympics set good examples. The iconic palm trees that people associate with LA are a result of a beautification campaign before the 1932 Olympic Games and the desire to create jobs for LA's unemployed during the depression. The 1984 Olympics were the only time a host city turned a profit, suggesting that hosting the Olympics doesn't necessarily spell disaster for public finances as some claim.

There are abundant investment opportunities. For example, LID projects utilize natural processes to mitigate the environmental impact of urbanization. In drought-prone Los Angeles, converting existing streets into ones with LID improvements is not only aesthetically pleasing, but can also augment the local water supply by providing stormwater capture benefits. Parks with stormwater management benefits contain large retention basins that collect rainwater during storms, creating short-term storage. This prevents stormwater runoff from carrying pollutants in the streets into rivers and the ocean, while also replenishing LA's local groundwater resources. These retention basins can also provide habitats for indigenous plants and animals. Projects to restore the LA River are already underway and could be expanded.

The region of Los Angeles between downtown and Long Beach is ideal for such projects because that is where the need is greatest. This region of LA has the largest concentration of groundwater contamination, emissions, and hazardous waste. It also has the highest density of poverty, unemployment, public health concerns, and more—making it where the environmental, social, and economic impact would be largest. LA has already invested significantly in the area's metro transit, meaning there may be opportunities to capitalize on or collaborate with existing development. Decentralized stormwater projects could provide additional benefits across environmental, social, and economic dimensions.

Sites selected for projects could prioritize impact and the likelihood for achieving sustainability. Sustainability isn't just about being green. To be sustainable, a project needs to make economic sense and benefit the surrounding communities (PDF). A park in a dense warehouse district may have the most environmental benefits, but it may not bring the same social and economic benefits of LID and public transit investments near a retail hub. Thus, it is important to identify and understand the most important issues facing targeted communities, including improving security, celebrating history and identity, enhancing community connections, and expanding mobility. Tradeoffs could be considered during site selection, and projects could reflect the needs of locals, giving communities a stake in the success of the parks as they become cherished parts of the city.

Sustainability isn't just about being green. To be sustainable, a project needs to make economic sense and benefit the surrounding communities.

Why multiple, varied projects scattered throughout the city? Why green streets, river restoration, and a decentral park? By distributing projects, planners can disperse project benefits among more people and places. This means more schools can be near parks and more homes can be on LID streets. There are environmental benefits as well to distributing projects. Distributed systems for stormwater management, for example, have lower energy demands and fewer maintenance requirements. Distribution (PDF) also means more resilience, flexibility, and opportunity for innovation at different sites.

Los Angeles can look to San Antonio's River Walk and Atlanta's Belt Line to see the myriad benefits of ambitious projects. Atlanta and San Antonio are good role models because, like LA, they are sprawling cities. They also embarked on projects that were environmentally conscious, creating more green space and restoring natural assets. Atlanta and San Antonio (PDF) also demonstrate how ostensibly green projects can yield significant economic and social benefits, benefiting from community engagement throughout the process.

Leveraging Olympic development, Measure W funding, and more to implement a wide range of sustainable projects would be an Olympian task. Yet in this city of dreams, farfetched, ambitious ideas are encouraged and rewarded. It's worth considering whether this might be a dream worth pursuing.