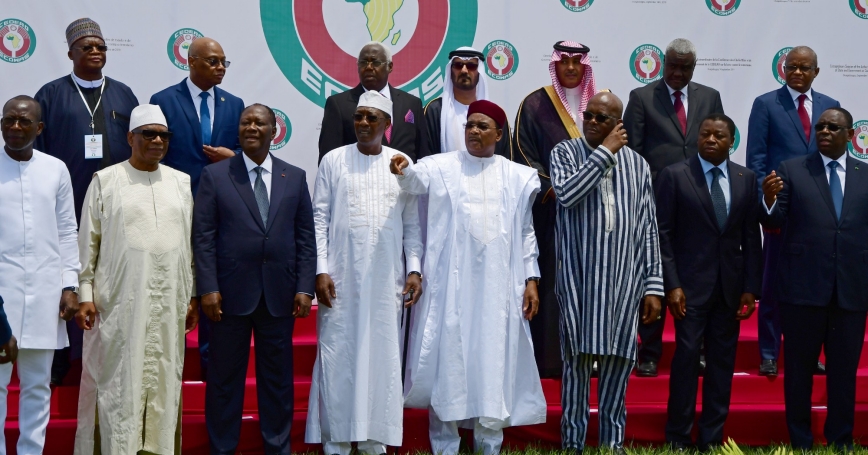 West African leaders and officials stand for a family photo at the ECOWAS extraordinary summit on terrorism in Ouagadougou, Burkina Faso, September 14, 2019

There is a very real possibility that the security crisis afflicting Burkina Faso, Mali, and Niger will spread to the countries of the West African littoral. Talk of a U.S. drawdown from Africa, or of U.S. support for French military operations in Africa's Sahel region, must take the evidence of this looming crisis into consideration. It most notably concerns the future security of Senegal, Guinea, Ivory Coast, Ghana, Togo, and Benin—Cameroon and Nigeria are already affected. Happily, there is reason to believe that the United States has options that might stave off the worst-case scenarios, if policymakers choose them. Early action including security-sector support could be the key. Many programs already exist, though they are threatened by possible cuts.

There are three things to understand about the crisis in the Sahel. First is that the region's insecurity, though driven by Islamist groups affiliated with international jihadist movements, feeds off of local conflicts and resentments the way a forest fire feeds off of built-up dry vegetation. The Islamists are remarkably adept at exploiting local cleavages.

Second, the speed with which that fire has spread—first in Mali and more recently in Burkina Faso—has exposed just how vulnerable these countries have long been, despite appearances. Analysts including myself got the region wrong, in part because of assumptions about Sahelian politics, religion and society that turned out to be incorrect. Looking at the coastal countries, there is evidence of comparable fragility in some areas. There is no reason to believe with certainty that the intercommunal fighting in central Mali couldn't happen in parts of Ghana, or that terrorists could not perform daily attacks in Dakar. Local conflicts of the type Islamists excel at exploiting abound. Ideas, people, and small arms flow freely across borders that, one must remember, British and French bureaucrats and diplomats set down with no regard for who lived where. These countries also share a problem: Their post-colonial governments have catered to certain elites while doing a terrible job of delivering for the people at the periphery.

Third: Burkina Faso, Mali, and Niger, clustered at the bottom of the United Nations' Human Development Index, have extremely limited means to deal effectively with any conflagration, let alone one at the scale we are seeing now in Mali and Burkina Faso. Imagine if Australia had only a few bucket brigades and garden hoses with which to fight its catastrophic bush fires.

The West Africa region's insecurity feeds off of local conflicts and resentments the way a forest fire feeds off of built-up dry vegetation.

This third point marks an important difference between Burkina Faso, Mali and Niger on one hand and the coastal states on the other. Many of the coastal countries have far more capable states that provide real governance. Several boast capable and professional militaries, most notably Ghana and Senegal. This means that friends from outside the region have more to work with. They can build on strengths that already exist, and partner institutions have a greater capacity to absorb their aid.

Skepticism about pouring resources into institutions that simply cannot manage them need not always apply. With relatively small but well-placed investments, the U.S. government could help littoral governments make their populations less vulnerable and their institutions more capable of stemming insecurity and dealing with emerging threats. Economic development always helps, but so would efforts to strengthen democratic institutions and shore up existing justice mechanisms. This would help these countries better address inadequacies, and it would prepare them to counter extremism and terrorism. Police forces are a logical target for assistance. So, of course, are militaries, which even if professional might not be prepared for the kind of fight they could soon face. The United States is already doing many of these things. Extant efforts (PDF) could be stepped up, supplemented or retooled as the nature of the threat becomes clear.

The key advantage is timing: Too often the United States responds to problems only after they've blossomed into full-blown crises. At that point, often nothing short of a major effort will do. Acting now, before the crisis, Washington could accomplish more, but with a smaller overall investment.

It should also be noted that in former French colonies there is growing anti-French sentiment on the part of the populations. This means there is a void that the United States can fill—a receptive ear for Washington's credible and positive voice. If the United States does not fill that void, there are plenty of others who might—among them are China, Iran, Russia, and Turkey.

This commentary originally appeared on RealClearWorld on February 18, 2020. Commentary gives RAND researchers a platform to convey insights based on their professional expertise and often on their peer-reviewed research and analysis.