A Coronavirus Election? Look to the Bottom of the Ticket 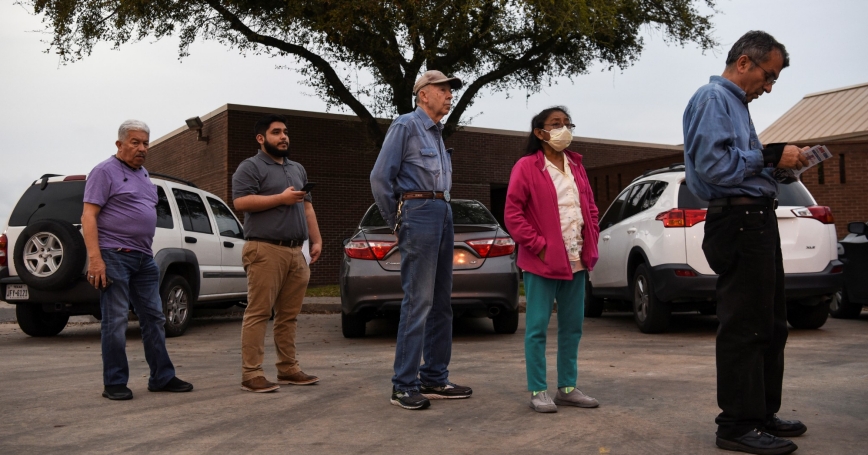 Voters wait in line to cast their ballot in the Democratic primary at a polling station in Houston, Texas, March 3, 2020

How the president responds to a disease outbreak is important, but it is only one aspect of multifaceted efforts at every level of government. Does a county have a system for prioritizing who receives virus tests and for delivering the results quickly? Will public transit be sanitized? Answering questions such as these is the real work of disease management—and it is not done by the White House.

For all the speculation about whether coronavirus will doom President Trump's reelection, voters motivated by the outbreak would do well to focus further down the ballot, on the state and local races that will determine who bears the lion's share of responsibility for the response. As the coronavirus spreads in communities, it will be mayors, county judges, and school superintendents—not federal officials—who make the tough calls about whether to declare a state of emergency or shutter public schools and other institutions.

Sometimes, those calls will even be at odds with what the White House recommends. During the 2014 Ebola crisis, for example, the governor of New Jersey, Chris Christie (R), put a health worker returning from West Africa under quarantine. Christie clashed with President Barack Obama and Centers for Disease Control and Prevention officials, who thought the lockdown would be ineffective and discourage other health workers from going to Africa to assist with the crisis. But it was Christie, not Obama, who had the jurisdiction to decide.

Today in Maryland, it is Gov. Larry Hogan (R)—not Trump—who is working with county officials to track down contacts with the three people in the state who have tested positive for COVID-19. Hogan was easily reelected in 2018 in part because Marylanders appreciated his efficient governance across party lines. The coming weeks will tell whether voters' confidence was well placed.

Having knowledgeable, competent state and local officials often matters more in how a community fares during a disaster than who occupies the Oval Office.

To the degree that the federal government does have jurisdiction in battling the coronavirus, it relies on state and local leaders to carry out its response measures. For the first time in more than 50 years, the CDC issued a federal quarantine, applied to a planeload of Americans evacuated from Wuhan, China. But federal quarantines are enforced by state officials. And once passengers disembark a plane, they are subject to the jurisdiction of the 2,800 state, local, and tribal health departments across the country who are responsible for setting quarantine rules and providing the staffing to trace viral exposure.

Having knowledgeable, competent state and local officials often matters more in how a community fares during a disaster than who occupies the Oval Office. Consider Hurricane Katrina in 2005. The federal government was heavily criticized for the inadequate response to the devastation along the Gulf Coast, but it was New Orleans Mayor Ray Nagin (D) who delayed issuing an evacuation order, let hundreds of buses available to carry New Orleans residents to safety sit idle, and saw a 15 percent desertion rate among the city's police force after the storm. And it was Louisiana Gov. Kathleen Blanco (D) who delayed the federal government's assistance by not submitting a timely formal request for help.

Katrina exposed what happens when state and local officials fail to lead and prove incapable of coordinating with one another and with federal authorities. Alarmingly, with the coronavirus, we're already seeing states, localities, and the federal government butting heads. In the Seattle area, there are signs that the virus spread undetected and caught health officials flat-footed. State and local officials are trying to ramp up testing and erect temporary housing for homeless people who may be ill while at the same time blaming the CDC for being slow to test. Pressure is mounting to permit state and local labs to run their own testing.

In Texas, Gov. Greg Abbott (R) criticized the CDC for releasing a woman from quarantine in San Antonio after she tested “weakly positive” for the virus on the third of three tests. San Antonio city officials sued the CDC and asked for more testing before people quarantined at Lackland Air Force Base are released. The mayor banned people released from Lackland from entering the city until they have undergone further testing.

Our system of government is not designed for efficiency or unilateral decisionmaking. Response to disasters—whether a hurricane or a disease—is still primarily a state and local responsibility; the federal government intervenes at the request of a state. If voters head to the polls with the coronavirus in mind, they should remember that who sits in state and local offices, and how they engage with federal authorities, may be the most important decision they have to make.

Patrick S. Roberts is a political scientist with a focus on public management and the policy process at the nonprofit, nonpartisan RAND Corporation. He is the author of “Disasters and the American State.”

This commentary originally appeared on The Washington Post on March 8, 2020. Commentary gives RAND researchers a platform to convey insights based on their professional expertise and often on their peer-reviewed research and analysis.