Force Planning in the New Era of Strategic Competition 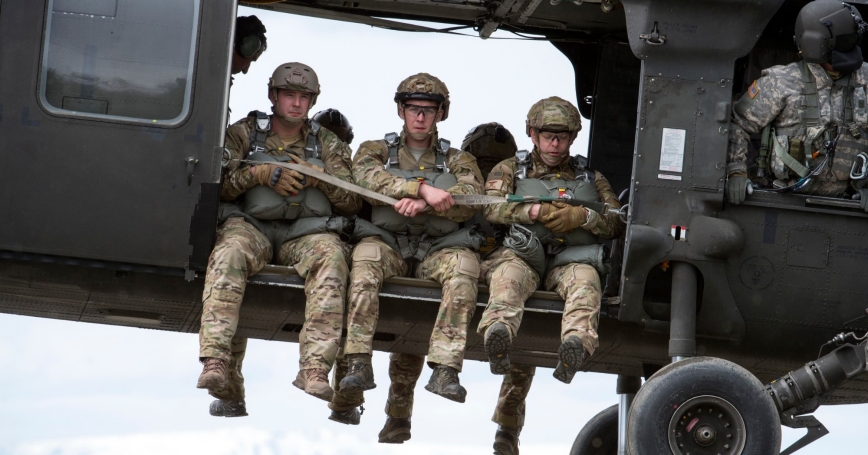 U.S. Airmen take off in an Alaska Army National Guard UH-60 Black Hawk helicopter at Joint Base Elmendorf-Richardson, Alaska, May 30, 2018

The U.S. Department of Defense announced (PDF) in 2018 that it was elevating the priority it placed on developing the capabilities necessary to deter Chinese and Russian aggression. That means that the Department needs new analytical frameworks to reassess what force development looks like during an era of peacetime military competition. In particular, analysts need techniques for estimating how much it costs each side to maintain a fixed military balance over time.

There are no finish lines in the military competition between opponents who are both wealthy and motivated. For example, the People's Liberation Army has been working steadily for at least 20 years on the specific goal of denying the United States the ability to generate combat power from air bases and on the broader goal of countering the American Way of War. Any single U.S. move to improve the resilience of its air bases could be countered by China. More broadly, any conventional deterrent contains the seeds of its own demise as each side “designs around” the other's capabilities. This reality requires the Defense Department to continually adapt as adversaries continue to modernize their capabilities. Military advantages in the 21st Century will likely not prove as durable as they were in the 1990s and early 2000s when the United States didn't have a motivated, technologically capable, and wealthy adversary to drive the competition.

This aspect of a military peacetime competition between major powers has similarities to a multi-move game: An adversary develops capabilities and operating concepts to be prepared to achieve its objectives in potential conflicts. The DOD responds by developing counter moves, prompting the adversary to respond with its own counter moves, which starts the whole cycle again. (Though many other factors also shape a nation's force structure.)

Such multi-move dynamics create serious challenges for the United States because traditional American force planning techniques were created to meet identified, singularly focused demands in discrete scenarios at fixed points in time. These techniques have the virtue of being tractable (an important consideration given the analytic tools involved), and were reasonable approaches when adversaries couldn't afford to rapidly adapt to American capabilities. But the complexity of a serious military peacetime competition makes these techniques insufficient. For example, they don't identify areas of the overall competition where the United States faces a fundamental disadvantage and should exit. They also don't inform the Department on which areas of the overall competition represent an advantage to the United States and should be reinforced.

In order to identify where the United States has advantages and disadvantages in overall peacetime military competition, force planners should have an analytic framework that (1) includes a multi-move scope, (2) includes consideration of the full force structure capability costs, and (3) examines constant-effectiveness pathways.

Analysis to support force planning during a peacetime competition should explicitly include cycles where adversaries adapt to each other's capabilities. Letting either side get the last move provides an unrealistically definitive picture of where advantage lies.

Considering Costs as Broadly as Possible

Some may think that it is already obvious where advantages lie—but there are complexities. For instance, some may argue that a ground-based ballistic missile is less expensive than the active defenses to shoot it down. However, the adversary would need to have the force structure to operate, support, and launch that missile, and these costs could be considerable. In just one example of these costs, the 56th Artillery Brigade, which operated 108 Pershing II medium-range ballistic missiles in Germany during the 1980s, had 6,315 military personnel. With a notional annual cost of $50,000 per person, the annual personnel costs alone of a missile unit that size would exceed $315 million, a great deal more than the roughly $16 million it might take to procure each Pershing II-class MRBM in 2019, according to a recent report by the Center for Strategic and Budgetary Assessments.

Force structure costs represent the cost of a peacetime competition more fully than the cost of munitions expended or material lost in the event of a conflict. For example, when estimating the cost of China holding U.S. main operating bases at risk in the Western Pacific, analysts should consider the annual cost of the People's Liberation Army Rocket Force's mobile missile brigades. This would involve steps such as amortizing the cost of equipping the PLARF's mobile missile brigades over the expected life of the equipment and estimating the annual expense of manning and operating these units.

Once one has estimated force structure costs to each side, analysts need a rigorous way to convert the cost of foreign military capabilities into USD to compare like to like. Both market and purchasing power parity (PPP) exchange rates have shortcomings for this application; the ideal solution is a rigorous military PPP index.

In their attempts to estimate the cost to each side of a multi-move competition, analysts should focus on pathways that maintain a constant level of combat effectiveness. Otherwise, analysis cannot distinguish between paying more to stay in the same place from paying more to make progress. In other words, the analysis needs to ask how much it costs each side to maintain a fixed military balance in the competition. In the case of the precision missile vs. air base competition, this military balance might be measured by how many sorties U.S. aircraft can generate in the face of the adversary's most effective attack.

A new framework could bring together three key dimensions: (1) cost to the adversary of improving its capabilities, (2) cost to the United States of improving its capabilities, and (3) the military balance resulting from the interaction of the two sides' new capabilities in a conflict scenario. Analysts can use modeling and simulation tools to estimate the 3rd dimension. The figure below demonstrates one way to visualize that framework. 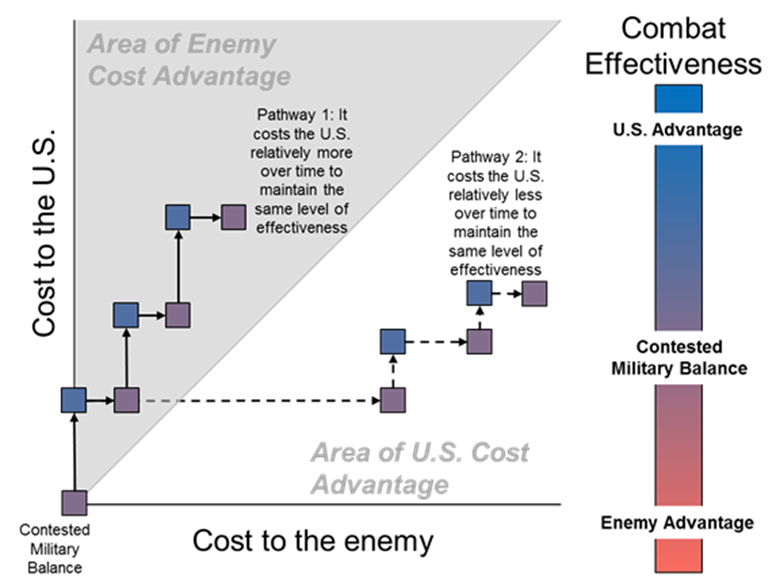 If the United States truly means to take a return to strategic competition seriously, force planning must evolve beyond the post–Cold War approach of designing forces and capabilities. In particular, U.S. force planning should reflect the multi-move character of the competition and consider the full force structure costs of maintaining a military balance. A new framework would enable users to test their intuition and identify areas of advantage while avoiding the risk of persisting in competitions that would impose onerous costs on the United States.

Jacob Heim is a defense policy researcher at the nonprofit, nonpartisan RAND Corporation. He has over fifteen years of experience in strategic assessment and defense analysis with a background in international relations and mathematics. From 2014 to 2017, he served as a strategic analyst in the office of the deputy assistant secretary of Defense (DASD) for Strategy and Force Development.

This commentary originally appeared on InkStick on March 26, 2020. Commentary gives RAND researchers a platform to convey insights based on their professional expertise and often on their peer-reviewed research and analysis.