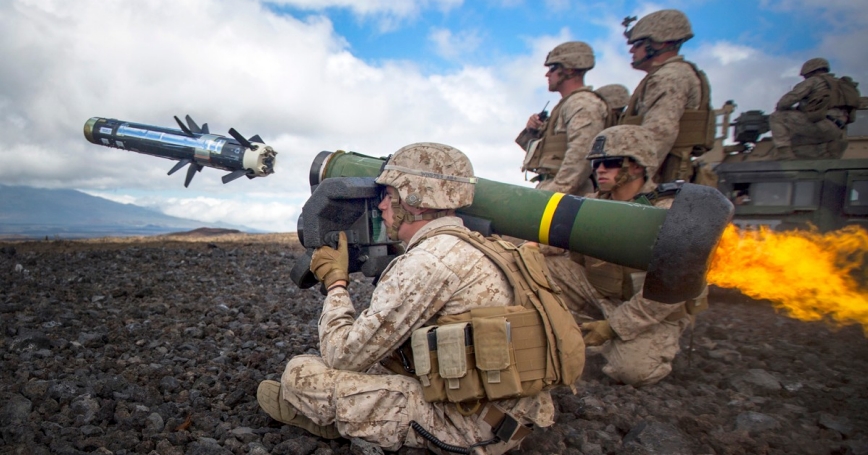 A Marine fires a Javelin during Operation Lava Viper at Pohakuloa Training Area, Hawaii, May 27, 2015

There is a precipice at Camp Pendleton that looms large in the minds of Marines. The Grim Reaper is a 700-foot-tall series of hills that recruits must summit to graduate from boot camp. As the Marine Corps attempts to transform itself from a second land army and counterinsurgency force to operate within contested maritime spaces, the recently released FY2021 budget request suggests that it will need to climb its own Grim Reaper to get there.

In August 2019, the Commandant of the Marine Corps, General David Berger, issued the Commandant's Planning Guidance (PDF) (CPG) that is notable in its clear emphasis on naval operations. He followed up the CPG with a pointed article that explicitly named 10 capabilities that should be divested to enable the acquisition of 11 new ones. It is rare to see such high-level planning documents clearly articulate capabilities that could be jettisoned. The list includes:

Strategy however, wears a dollar sign. Although Berger's writings are unusually frank, a more telling measure of how the organization responds to change will be evident in its budget. The CPG was released as the FY2021 budget was being completed and it will not be until FY2022 when the implementation of Berger's intent can begin to be measured.

Nevertheless, the recently released FY2021 budget can provide some sense of the external and internal organizational inertia that the Marine Corps must overcome if it is to successfully move towards the vision articulated in the CPG. It is especially important to focus on divestment areas, as resistance to change is likely to be strongest for programs that already exist and have stakeholders that support them. An increase in requested funding since the FY2020 budget for divestment areas could suggest that these programs or capabilities are not winding down, but continuing to attract institutional support.

Organizational Inertia in the FY2021 Budget?

With those criteria in mind, we find indications that the Marine Corps will have to contend with at least $700 million of sunk costs in FY2021 across four capabilities they hoped to divest from. The table below summarizes these areas identified by comparing Berger's divestment priorities with programs that are likely to align with them.

The most significant component of this investment is in manned ground transportation capabilities. The FY2021 budget request seeks $566 million to procure the amphibious combat vehicle (ACV), ultra-lightweight tactical vehicle (ULTVs), and to improve the Vietnam-era amphibious assault vehicle (AAV).

It also spends a significant amount in legacy anti-armor and indirect fire capabilities that the Marine Corps hopes to divest from. The budget envisions spending $55 million to procure legacy manned Javelin and tube-launched optically tracked wire guided (TOW) anti-armor systems. Another $61 million in RDT&E would be spent on traditional towed artillery development, even though it is unlikely that towed howitzers like the M777 will achieve range improvements needed to contribute to the Marine Corps' operating concept.

The Grim Reaper of Institutional Inertia

There are many factors that make inferring intent from budget documents an imprecise art rather than a science. The Marine Corps was probably unable to scale back funding requests related to these divestment areas, since the CPG and Berger's divestment areas were not articulated until the FY2021 budget request was all but complete. Even if it could, other factors may have mitigated against trying to cut these areas at this time. It may be more costly, for example, to stop a program like the ACV instead of finishing it. Furthermore, there are not yet any appreciable indications about the status of six other divestment areas identified by Berger. It is possible, perhaps even likely that the potential for decisive action on these divestment areas still exists.

Still, this analysis foreshadows the potential institutional inertia that the Marine Corps may have to contend with as it tries to transform itself into a maritime-focused force. In the grand scheme of the Marine Corps' procurement and RDT&E budget, $700 million is not a large amount, but this tally of sunk costs was purposefully conservative. The full amount of sunk costs for all divestment areas is almost certain to be larger. The Marine Corps may have to suppress its instinct or resist external pressures to retain legacy capabilities if it wants to transform itself into the force it hopes to be.

Camp Pendleton's Reaper does not look formidable when seen as a set of contour lines on a map. But fog from the Pacific Ocean can obscure all but the first 100 feet of hillside, making it a demoralizing climb as recruits ascend one hill only to find another behind it, and still another behind that. It is rare for a recruit to fail to complete the 700 foot climb, but it is painful. Berger's restatement of his commitment to transformation in his recent Congressional testimony and actions to reform other areas of the service suggest that he will exert strong leadership to overcome the burden of past investments, but it will still likely require serious effort.

Jonathan Wong is an associate policy researcher at the nonpartisan, nonprofit RAND Corporation and a professor at Pardee RAND Graduate School. He previously served as a Marine Corps infantryman from 2001 to 2011.