After the Coronavirus: America Needs to Reengage with the World, Not Retreat from It 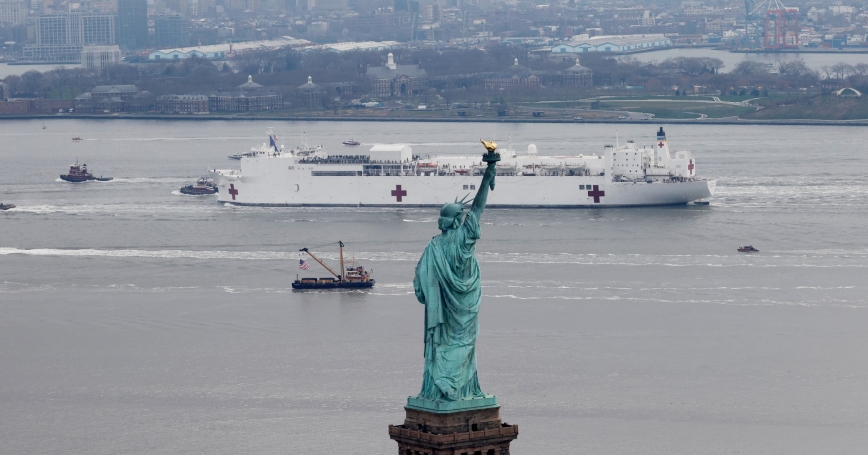 The U.S. Navy hospital ship Comfort passes the Statue of Liberty as it enters New York Harbor during the COVID-19 outbreak, March 30, 2020

by Krishna B. Kumar and James Dobbins

The COVID-19 pandemic is bound to raise questions, including in the presidential campaign, about what direction America should take in the future. Should the United States continue on the path of globalization and become further integrated with the global community, to benefit from resulting gains and collectively solve problems? Or should it make permanent some of the barriers that have been erected to fight the epidemic, whose origins lie on foreign shores, and become less globalized?

Long before globalization, before even the realization that the earth was round, as early as 10,000 B.C., smallpox was carried by Egyptian merchants to India, and the disease was not eradicated until 1979. Black Death (a global epidemic of bubonic plague) struck both Europe and Asia in the mid-1300s. The H1N1 outbreak of 1918 (“Spanish flu”) remains the most deadly pandemic in history, with 50 million deaths worldwide and 675,000 in the United States alone.

More recently, the globalized world has seen multiple waves of Ebola, starting in 1976, severe acute respiratory syndrome (SARS) in 2003, swine flu in 2009 (a resurgence of H1N1) and the Middle East respiratory syndrome (MERS) in 2012, none of which had nearly the toll of those earlier plagues.

In the modern era, economic and financial crises have also proved contagious. The East Asian Financial Crisis of 1997, which started with the collapse of the Thai baht, reverberated in the region and the world. The spreading of this economic virus was in fact referred to as a contagion (PDF). The Great Recession of 2008, which originated in the United States as a result of the subprime mortgage crisis, could likewise be considered a financial pandemic.

Even when the world was not in crisis, the economic effects of globalization within the United States and elsewhere have not been uniform. The less skilled, especially in the manufacturing sector, have lost out as developed countries have turned to outsourcing and imports to take advantage of cheaper labor in emerging economies.

Given these downsides to openness, why not erect permanent barriers and become more closed? Because losses from globalization are concentrated, while gains are diffused, those who say yes to this question tend to be more vocal. And in times of distress such as the present moment, this stance is understandable.

However, it would be a mistake to rush to an answer without looking at the benefits of global integration. Globalization has reduced poverty and improved the standards of living for millions of people.

Globalization has reduced poverty and improved the standards of living for millions of people.

Even within the United States, many sectors including manufacturing have benefited from global supply chains, with each country supplying parts and components based on its comparative advantage. Higher education, travel, and tourism have also benefited from global integration and consumers from lower prices. While jobs were lost in sectors susceptible to imports, new ones were created in exporting sectors.

America Has Been the Leader

Moreover, problems such as climate change, pandemics, and financial crises know no national boundaries and can best be addressed through a combination of collective responses. The Ebola, SARS, and MERS epidemics occurred in an integrated world where a collective response was possible, resulting in far fewer deaths than the earlier diseases of smallpox, plague, and the 1918 flu. And the United States has played a leadership role in those responses, most notably in fighting the Ebola virus. This latest pandemic could similarly benefit from more American leadership.

Instead of jettisoning globalization and integration to avoid risks, a better aim would be to collectively manage risks, minimize damage, and speed recovery. After the East Asian financial crisis, several countries reformed their financial systems and floated their currencies. After the subprime mortgage crisis, the United States enacted extensive banking and financial sector reforms. These institutional actions lent greater stability to the global financial system.

On the policy side, beefing up trade adjustment assistance to address the real needs of workers displaced by trade would help. Technological change such as automation is a greater danger for jobs than trade, and both trade and technology demand that the United States revamp its education and training system for the future of work. In these institutional and policy actions, too, the United States could exercise leadership to its own and the world's benefit.

Similarly, the COVID-19 pandemic should lead to a further strengthening of the national and international response capacity.

In his book Bound Together, Nayan Chanda writes: “Calls to shut down globalization are pointless, because nobody is in charge.”

Global integration is the collective decision of billions of world citizens. Instead of fighting what is inevitable, and ultimately beneficial overall, a robust global system should be built to bring prosperity to all and coordinate responses to any challenges that may arise. The alternative of erecting barriers and closing America off to the world would leave it more vulnerable to the next big shock.

Krishna B. Kumar, director of international research at the nonprofit, nonpartisan RAND Corporation, is director of the Initiative for Global Human Progress at the Pardee RAND Graduate School. James Dobbins is a senior fellow and distinguished chair in diplomacy and security at RAND.

This commentary originally appeared on USA Today on March 31, 2020. Commentary gives RAND researchers a platform to convey insights based on their professional expertise and often on their peer-reviewed research and analysis.