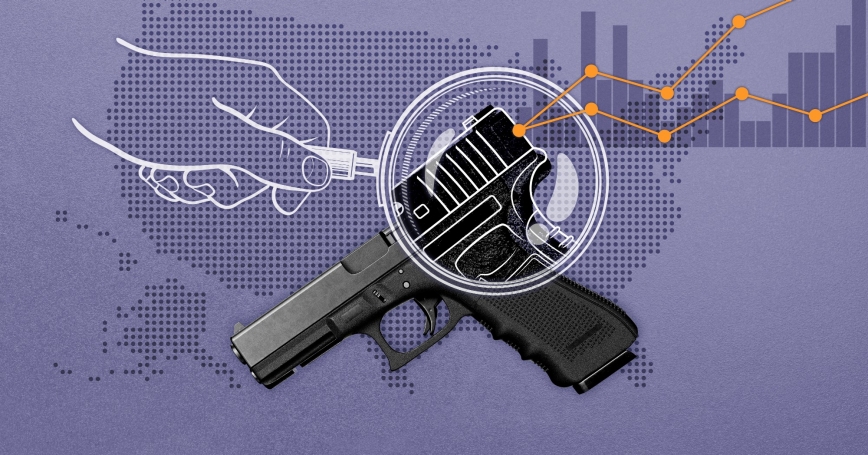 Illustration by Chara Williams/Images by Adobe Stock and Getty Images

RAND's Gun Policy in America initiative aims to establish a shared set of facts about gun policies. Recently, it completed an update and expansion of its synthesis of all available scientific evidence on the effects of 18 classes of gun laws.

The literature synthesis team, led by Rosanna Smart and Andrew Morral, reviewed thousands of studies to examine the effects of gun laws on outcomes such as suicide, violent crime, mass shootings, defensive gun use, and hunting and recreation.

Since the project was first released in March 2018, the volume of research on firearm-related topics has grown, providing strong new evidence for some laws, but there remain large gaps in the evidence base.

In an update to the Gun Policy in America initiative released this week, the research synthesis has been expanded to include more recent studies and older research, and to consider the evidence for five additional classes of gun laws. New resources have also been added to help researchers conduct further studies.

Here are three key takeaways from the latest update to Gun Policy in America.

On the existing evidence, stand-your-ground laws are actually making people less safe and more likely to be the victim of a firearm homicide.

More than two-thirds of states have implemented some type of stand-your-ground law, which removes the duty to retreat in some cases of self-defense. Although these laws were intended to improve public safety, the authors conclude, “On the existing evidence, these laws are actually making people less safe and more likely to be the victim of a firearm homicide.” They recommend states with these laws consider repealing them.

Recent work also provided stronger evidence for the effects of waiting periods, which enforce a delay before taking possession of a firearm after purchase. Researchers found moderate evidence that waiting periods reduce rates of firearm suicide and total homicide, in addition to limited evidence that these policies reduce total suicides, firearm homicides, and violent crime rates.

As well as these updates, analysis of new research resulted in adjustments to conclusions about several other types of laws, and the downgrading of some evidence ratings.

Evidence Gaps Persist for Many Types of Gun Laws

Despite the increase in firearm-related research studies—this latest review found 123 more that met our criteria, almost double the number from 2018—we still lack robust evidence for the effects of several types of commonly-proposed gun laws.

Of the five new policies studied, researchers were able to identify evidence of effects for only one, prohibitions associated with domestic violence. (Studies provided moderate evidence that domestic violence restraining orders may reduce intimate-partner homicides.)

For the remaining four—bans on low-quality handguns, extreme risk protection orders, firearm safety training requirements, and laws allowing armed staff in K–12 schools—studies either provided inconclusive evidence or did not estimate the effects of the law with sufficient rigor to be included in the review.

The limited evidence base means we also lack strong research on the effects of gun policies on several important outcomes.

This limited evidence base means we also lack strong research on the effects of gun policies on several important outcomes, including officer-involved shootings, defensive gun use, hunting and recreation, mass shootings, and the gun industry.

These gaps reflect, in part, limited federal funding for research on gun-related mortality in the past two decades. In 2019, Congress appropriated $25 million for this purpose, which if sustained in future budgets, could make a significant contribution to the knowledge base.

Gun Ownership Rates Have Been Declining over the Last Three Decades

Understanding how common gun ownership is in each state and how ownership rates have changed over time is often important for testing theories about the effects of gun laws.

But direct reliable measures of state-level firearm ownership exist only for a few years, and studies evaluating gun policies outside of those years have had to rely on proxy measures for gun ownership, such as the proportion of suicides committed with a firearm. However, these proxy measures may be influenced by factors unrelated to gun ownership and may not have a constant relationship with gun ownership over time.

To support research in this area, RAND developed a longitudinal database of state-level estimates of household firearm ownership from 1980 to 2016. These estimates are derived from a statistical model that draws on a wide range of survey and administrative data sources associated with household gun ownership. These estimates can also be explored through an interactive chart on the Gun Policy in America website.

Our results show that from 1980 to 2016, gun ownership rates in the United States have declined relatively consistently, though there are noteworthy differences in trends at the state level.