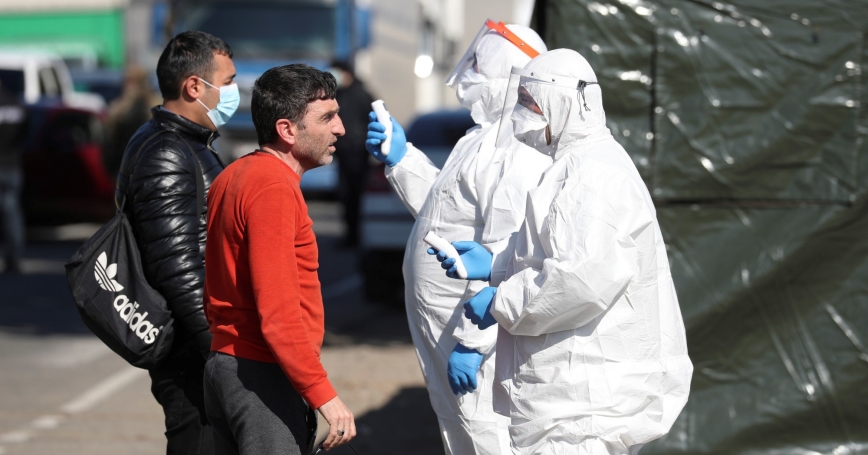 Much of the post-Soviet space remains afflicted with authoritarian rule, inefficient economies, corruption, and regional tensions. The COVID-19 crisis could be the kick in the pants that prods countries to address key issues, but they will need help. Targeted Western aid could help willing countries make progress, such as by improving public health and wider support for it, fostering governmental transparency and promoting interstate cooperation.

The pandemic has revealed public health shortcomings worldwide. EU countries were slow to heed warnings and react and some initially resorted to border tightening. The United States also has been slow to react, abetted by official overconfidence, confused guidance and federal-state disputes. In post-Soviet countries, especially in underserved rural and separatist regions, health care systems are mostly inadequate to the threat.

First, reform of health care systems can bring broad benefits. Ukraine has created a single-payer system that pays for services at the point of care. Money follows the patient, so hospitals and clinics now compete for patients rather than wait for government grants not linked to services provided. In the first year of the reform 28 million Ukrainians signed up to participate. Western assistance could help other countries with similar reforms.

Second, post-Soviet states could improve health care services by relying more on technology and transparency, such as through e-governance services. Ukraine's e-procurement system, ProZorro, has saved taxpayers nearly $4 billion over four years. Prospective amendments may further increase efficiency and bring another 250,000 tenders into open auctioning. This could make it even harder to disguise corruption and buying of shoddy goods. Western aid has assisted in Ukraine's efforts.

Third, post-Soviet states could increase the delivery of health care services to rural and impoverished areas, including separatist regions. Georgia offers free medical treatment to residents of Abkhazia and South Ossetia who cross the border to receive it. In the post-Soviet space Western aid could help fund such programs and telemedicine in rural and separatist regions. This may bring the added benefits of providing early warning of incipient threats and bolstering person-to-person contacts.

The post-Soviet space is noted for inadequate cooperation and COVID-19 provides a dramatic reason to improve it.

Fourth, the COVID-19 crisis could increase awareness of the value of cooperation across state boundaries. The post-Soviet space is noted for inadequate cooperation and COVID-19 provides a dramatic reason to improve it. Western aid could facilitate this in the health domain and help support civil society's efforts to sustain it.

Fifth, the COVID-19 crisis underscores the value of openness and candor in informing publics. As late as March 21, Russia's Health Ministry admitted to only 253 cases, but on April 13 President Putin was more candid. “We do not have much to brag about.” Despite public suspicion of official information, Russia is now more open in dealing with the pandemic than some other post-Soviet countries, such as Belarus and Turkmenistan. Greater openness could increase public trust and support for preventive measures, such as social distancing.

All countries in the post-Soviet space may take more steps to counter the COVID-19 threat, including to prepare for a potential return next winter at a time when health care systems will also be busy treating ordinary flu cases. Practical steps such as those outlined above could make post-Soviet states and societies somewhat more resilient to these challenges.

Western aid could assist post-Soviet countries to implement practical measures. Europe is taking the lead. The European Commission has approved $1.76 billion in new aid to four of the most democratic post-Soviet states (Armenia, Georgia, Moldova and Ukraine). The aim is to help them limit the economic fallout of the pandemic and reinforce preparedness of their health services. The Commission under its “Team Europe” strategy is also providing other aid to support partner countries' efforts. It is in the U.S. interest likewise to contribute.

The coronavirus pandemic teaches that infectious diseases from anywhere in the world can morph into threats everywhere. Post-Soviet countries have an incentive to steel themselves against these risks by increasing the priority of public health and deepening cooperation with each other. This could promote health until development of better treatments and a vaccine against COVID-19. Intensified public health efforts could also lead to wider cooperation and interdependence across the post-Soviet space.

Denis Corboy was the director of the Caucasus Policy Institute, King's College London, and EU ambassador to Georgia and Armenia. William Courtney is an adjunct senior fellow at the nonprofit, nonpartisan RAND Corporation, and was U.S. ambassador to Kazakhstan, Georgia, and a U.S.-Soviet commission to implement the Threshold Test Ban Treaty. Kenneth Yalowitz is an adjunct professor at Georgetown University and Global Fellow at the Wilson Center, and was U.S. ambassador to Belarus and Georgia.

This commentary originally appeared on The Moscow Times on May 8, 2020. Commentary gives RAND researchers a platform to convey insights based on their professional expertise and often on their peer-reviewed research and analysis.