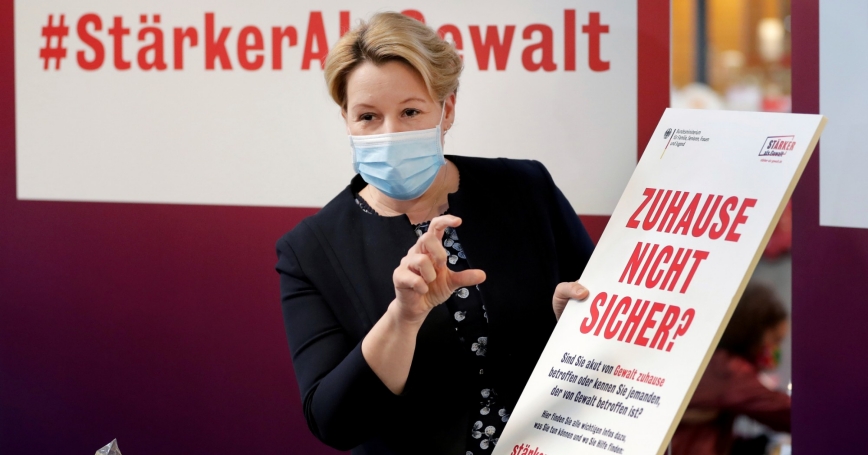 German Minister for Family Affairs, Senior Citizens, Women and Youth, Franziska Giffey speaks as she poses with a poster for a campaign against domestic violence, in a supermarket in Berlin, Germany, April 29, 2020

One of the most worrying and consistent trends during the COVID-19 lockdown is an increase in domestic violence.

In Hubei province in China, where the outbreak first emerged, reports of domestic abuse to police more than tripled in February compared to the same period last year.

According to the European Parliament, cases of domestic violence have risen by one-third in some EU countries in response to the lockdown.

Lockdown makes it more challenging for victims to contact support services or the police while forced to remain under the same roof as their abuser.

Traditional reporting tools, such as a national hotline—one of the requirements of the Istanbul Convention on preventing and combating violence against women and domestic violence—may be more difficult to use.

For example in Italy, calls to the national helpline have dropped sharply since the lockdown was introduced, but there has been a concomitant rise in reports via other channels such as email.

Witnesses can be a crucial source of support for victims, as highlighted in an ongoing RAND Europe study, but social distancing means that fewer witnesses will become aware of the violence or might be able to provide direct help.

Cases of domestic violence have risen by one-third in some EU countries in response to the lockdown.

Furthermore, the support services for victims and witnesses, the police and other relevant authorities are stretched to the limits because of staff shortages, travel restrictions or other demands related to COVID-19.

Victims may also be deterred from visiting refuge shelters, their doctor, or accessing emergency health care for fear of contracting the virus, as well as being uncertain as to whether they are allowed to leave the home during lockdown.

Governments are taking different approaches in how they act to stop the violence and help victims to be heard during the lockdown.

For example, France offers hotel accommodation for victims to remove them from the reach of their abusers. And in Italy, authorities aim to remove the abuser instead, to spare the victim the additional trauma of having to leave the home.

The European Parliament has called on member states to increase capacity in women's shelters during the pandemic, and to provide flexible tools for reporting domestic abuse such as text messages or online chats.

France has implemented a text message service, and a reporting app was recently introduced in Italy.

Since lockdown was introduced in Spain, a new system has been set up where women can inform pharmacists of abuse by using the code word 'mask 19', allowing pharmacy staff to alert the emergency services.

This system has now been adopted in other countries such as France, Germany, Italy, Norway and Argentina.

However, further action must be taken to share information and develop evidence about the effectiveness of new initiatives introduced in the context of the lockdown. It is important that lessons learned during this period are retained and integrated into future decisionmaking, since measures introduced are likely to benefit victims even after restrictions are lifted.

If the lockdown triggered more first-time abuse, this increased scale of violence may persist after the restrictions are over.

A number of studies show that many who have experienced domestic violence for the first time are likely to experience it again within a few weeks or a year. This evidence suggests that if the lockdown triggered more first-time abuse, this increased scale of violence may persist after the restrictions are over.

Following COVID-19, governments in some countries, including the UK, France, Belgium and Ireland have promised to increase their financial commitments, but in some countries these promises are still viewed as insufficient to meet the demands.

Finally, it is important to acknowledge that it's not just support services or national authorities who have the opportunity to help victims of domestic abuse.

Extended families, friends, neighbours and co-workers can reach out to make sure their close ones are safe during this time—and not just from COVID-19.

Madeline Nightingale is an analyst, Joanna Hofman is a senior analyst and Sarah Grand-Clement is an analyst at RAND Europe where they are currently conducting a study on the factors facilitating witness reporting of intimate partner violence.

This commentary originally appeared on EU Observer on May 8, 2020. Commentary gives RAND researchers a platform to convey insights based on their professional expertise and often on their peer-reviewed research and analysis.