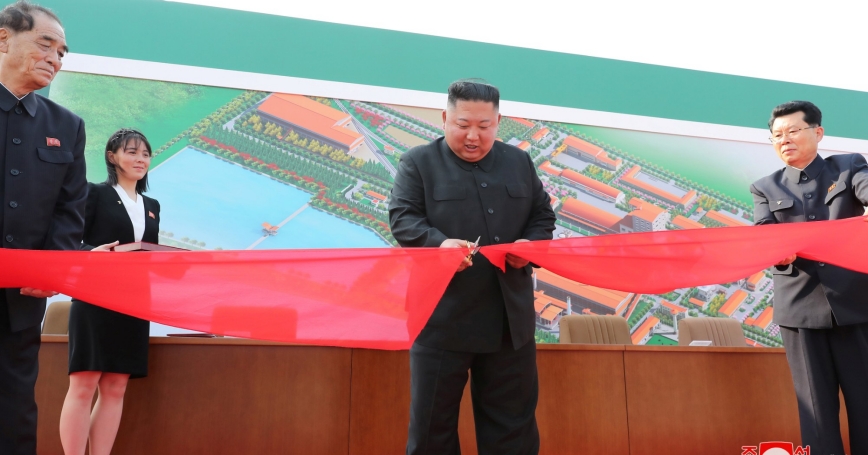 Kim Jong Un attends the completion of a fertilizer plant with his younger sister Kim Yo Jong, in a region north of Pyongyang, May 2, 2020

If North Korea's fate begins and ends with the Kim family, then whither U.S.–North Korea relations for the remainder of the year? Kim Jong Un broke his twenty-day submergence by attending a ribbon-cutting ceremony at the Sunchon Phosphatic Fertilizer Factory—a facility that may serve a dual-purpose of fertilizer production and uranium extraction to make nuclear weapons. Granted, his skin color and gait appeared off-kilter to even the less discerning spectator, but Kim seems to have moderately succeeded in keeping up appearances of a functioning regime by Pyongyang's standards.

In time-tested North Korean fashion, several days following Kim's resurfacing, Pyongyang's military fired multiple shots at a South Korean guard post in the demilitarized zone. Seoul's military returned with a short volley of shots, but perhaps in an effort to downplay tensions, ROK officials have promptly dismissed the incident as a mishap.

Kim's return, while it leaves much to be desired in the way of explanation, should send one message to the international audience: North Korea's fate rests still in the hands of Kim Jong Un. And judging by appearances in recent days, Kim does not appear to have the intention to change the course of his strategy to reduce tensions with Washington.

This means, of course, a continuation in the buildup of nuclear tensions and missile provocations—as alluded to in the recent analysis by the Center for Strategic and International Studies. Illicit trade, ship-to-ship transfers, and cybercrimes will continue to serve as funding sources for Kim's nuclear arsenal and indulgent lifestyle. South Korea and Japan, Washington's two critical allies in the region, will continue to bear the brunt as unwilling targets of Pyongyang's shorter-range missile intimidation and conventional military aggression.

If North Korea's fate begins and ends with the Kim family, Kim Jong Un's return signifies plainly that by and large, it's business as usual in the Hermit Kingdom.

Soo Kim is a policy analyst at the nonpartisan, nonprofit RAND Corporation.

This commentary originally appeared on The National Interest on May 18, 2020. Commentary gives RAND researchers a platform to convey insights based on their professional expertise and often on their peer-reviewed research and analysis.