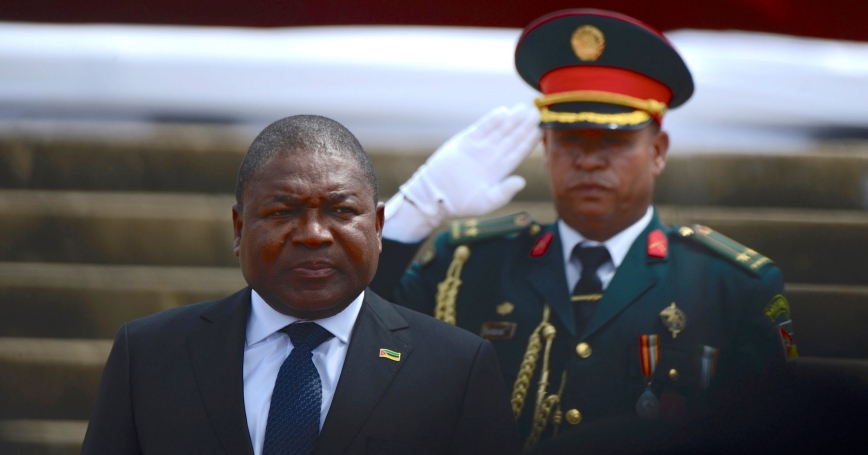 Mozambique's President Filipe Nyusi is saluted as he is sworn-in for a second term in Maputo, Mozambique, January 15, 2020

As Mozambique enters the third month of its lockdown to slow the spread of COVID-19, fighting between government troops and a shadowy Islamist militia has escalated significantly in the northernmost province of Cabo Delgado. According to the Armed Conflict Location and Event Data Project, a global monitoring group, insurgents have stepped up attacks in 2020, with more than 100 “violent events” this year, the precise term ACLED uses based on its methodology—an increase of 300 percent over the same period last year. In roughly 90 of those incidents, militants attacked civilians, resulting in more than 200 reported fatalities, including one particularly deadly attack in April that killed 52 civilians. In some instances, those who refused to join the militia were reportedly beheaded.

Fighting between soldiers and Islamist insurgents over the past two-and-a-half years has left over 1,000 people dead and displaced up to 200,000 in northern Mozambique, stymying the government's attempts to exploit the vast natural gas resources in the region. But the insurgency seems to have accelerated since last June, when the Islamist militia in Cabo Delgado pledged bayat, or allegiance, to the local faction of the Islamic State, its self-described Central African Province. Since then, ISCAP, as the Islamic State's affiliate is known, has claimed responsibility for dozens of attacks in Mozambique. While Southern Africa has largely remained immune from violent extremism, the situation in northern Mozambique threatens to destabilize the country and could potentially spread to other parts of the region.…

Hilary Matfess is a Ph.D. candidate at Yale University and the author of Women and the War on Boko Haram. Alexander Noyes is a political scientist at the nonprofit, nonpartisan RAND Corporation.

This commentary originally appeared on World Politics Review on June 4, 2020. Commentary gives RAND researchers a platform to convey insights based on their professional expertise and often on their peer-reviewed research and analysis.