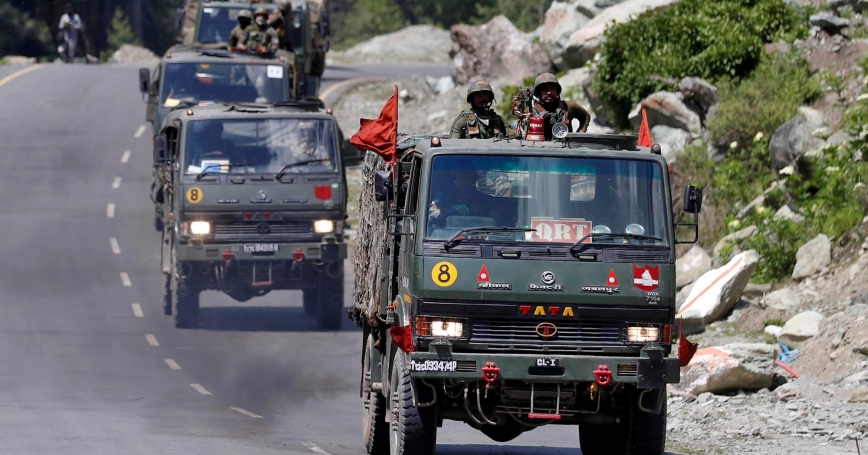 An Indian Army convoy moves along a highway leading to Ladakh, at Gagangeer in Kashmir's Ganderbal district, June 18, 2020

As the China-India military standoff along their disputed land border heads into its third month, questions and theories continue to swirl about Beijing's motivation for taking such aggressive action at this time. Since the violence began in early May, China has reportedly amassed thousands of troops with armored vehicles and towed artillery at multiple points near the Line of Actual Control (LAC) where the Indian union territory of Ladakh borders Tibet—representing the most significant military escalation in border tensions in over a half century.

But why now? There are many potential explanations, ranging from Chinese disgruntlement over Indian infrastructure upgrades near the LAC, to anger at India's rejection of the Belt and Road Initiative (BRI), to retaliation for New Delhi's decision to limit Chinese investment in India, among others. One potential explanation that certainly has gained currency in mainstream media is that Beijing is attempting to exploit the ongoing coronavirus pandemic for geopolitical gain. The theory fits well in the overall narrative of rising Chinese assertiveness since the start of the pandemic, including against Taiwan, Hong Kong, and maritime counterclaimants in the East and South China Seas, which is probably why it has become so popular.

However, as I have previously argued, the story simply does not hold up. Beijing had already been increasingly threatening the Indo-Pacific region pre-pandemic. Instead, what we are witnessing nowadays is more likely a continuation of an ongoing trend rather than a departure from it. This is also true in the Himalayas, where Chinese violations of the LAC are a regular occurrence. What is striking this time around is the scale of Beijing's military action and the tragic results to date—at least 20 Indian deaths and an unknown casualty count on the Chinese side. For most observers, China's mobilization of thousands of forces near the LAC strongly implies substantial preparation and thus top leadership authorization. That is almost certainly true. But evidence supporting the next analytical inference—because this was a large-scale military operation then it must be related somehow to exploiting the coronavirus crisis—simply does not exist.

Rather, Beijing has clearly stated that New Delhi's recent infrastructure enhancement was the primary driver of Chinese concerns. In a comprehensive interview on June 25 with Chinese ambassador to India, Sun Weidong, Sun notes that “The two sides basically have kept peace for decades. However, since the beginning of this year, the Indian side has continuously built facilities at or crossing the LAC in the Galwan Valley, constantly changing the status quo on ground control.”

Beijing had already been increasingly threatening the Indo-Pacific region pre-pandemic. What we are witnessing nowadays is more likely a continuation of an ongoing trend rather than a departure from it.

Even if Beijing's statement is not to be believed, experts would be hard-pressed to deny that India has been making significant upgrades to infrastructure along the LAC (and so has China as well). The posterchild of such developments, and perhaps the spark of the current hostilities, is New Delhi's near-completion of a strategic road known as the Darbuk-Shyok-Daulat-Beg-Oldie (DSDBO). DSDBO is an all-weather road stretching approximately 255 kilometers that will dramatically improve travel times between the historical Himalayan capital of Leh and Daulat-Beg-Oldie, which is located at the Karakoram Pass and considered a geostrategically sensitive entrance point into China's restive Xinjiang province. As relates to the current standoff, Taylor Fravel, an expert on China's border conflicts, surmised that a feeder road from DSDBO toward the Galwan Valley was probably interpreted by Beijing as a potential “back door into [Chinese-controlled] Aksai Chin.”

Given Chinese concerns, Beijing probably wants to offset Indian infrastructure improvements that might offer logistical advantages in the future. From this perspective, China's decision to occupy parts of Galwan Valley, according to recent imagery, may be designed to limit any tactical or strategic dividend India might receive from enhanced infrastructure near the LAC. Interestingly, China may have little choice in the matter. Although rarely discussed in Western circles, China probably lost its last standoff with India, referred to as the Nathu La and Cho La clashes, in 1967—and this predates the infrastructure upgrades that are set to give New Delhi potentially new military advantages. Contrary to conventional thinking, New Delhi may already have a leg up in certain respects—for example, hardened combat experience it acquired by fighting Pakistan and high-altitude warfare training—even though Beijing still probably maintains an overall advantage.

Furthermore, India's strategic roads are not just roads with implications during wartime, but in peacetime they also support India's ability to patrol disputed areas. Indian geopolitical analyst Harsh V. Pant of the Observer Researcher Foundation argues that “India has ramped up infrastructure on its side, so the Chinese military is finding Indian soldiers in locations where they are not used to seeing Indian footprint. Indian Army's patrolling is also more effective than in the past, forcing Chinese military to up the ante.” Thus, Beijing would reasonably want to respond through consolidation of its territorial claims.

Finally, Western analysts to date have probably underestimated the significance of Indian Prime Minister Narendra Modi's decision in August 6, 2019, to revoke Article 370 of the Indian constitution to unilaterally change the status of Jammu & Kashmir and Ladakh. For New Delhi, doing so should have been a non-factor since these are settled territories. For Beijing, however, the move seems to have struck a chord because it called into question Indian motives for Aksai Chin which borders Ladakh. Preeminent South Asia specialist Ashley Tellis raised the issue, writing: “…China's fierce opposition to the transformation of Ladakh's status, something that received only passing attention hitherto, set the stage of the militaristic power play that is now underway along the LAC.” Tellis later added that Beijing believes New Delhi had been involved in “cartographic aggression,” and as a result, he has been receiving “an earful” from Chinese interlocutors about it. On the same day as Modi's abrogation of Article 370, India's Home Minister, Amit Shah, vowed to give his life for the integrity of Jammu and Kashmir—to include Aksai Chin—further stoking Chinese concerns.

There is no doubt that countering Indian infrastructure development near the LAC played a crucial role in Beijing's decisionmaking. Additionally, Modi's decision on Article 370, though not considered a big deal in New Delhi, apparently rang alarm bells in Beijing. Of course, there could be other reasons that contributed to China's assertiveness along the LAC. None, however, support the notion that China was trying to exploit the coronavirus pandemic for geopolitical gain.

If anything, China expert Yun Sun reverses the causation, arguing that Beijing may have thought New Delhi's growing assertiveness at the LAC was nefariously timed to exploit China while it was trying to deal with deteriorating U.S. ties amid the coronavirus fallout. She references a Chinese article that notes India had tried “to stab it [China] in the back.” Thus, Beijing had to respond forcefully. Even if this argument is to be believed, it still does not negate Chinese grievances about Indian moves at the border. Rather, it seems that Beijing would have responded militarily regardless—albeit perhaps without as much force and at a different time—to properly adjust what it saw as New Delhi's steady attempts to change the status quo on the ground.

This commentary originally appeared on The Diplomat on July 5, 2020. Commentary gives RAND researchers a platform to convey insights based on their professional expertise and often on their peer-reviewed research and analysis.