Is the U.S. Stuck with a Fixed Add-On for Unemployment? 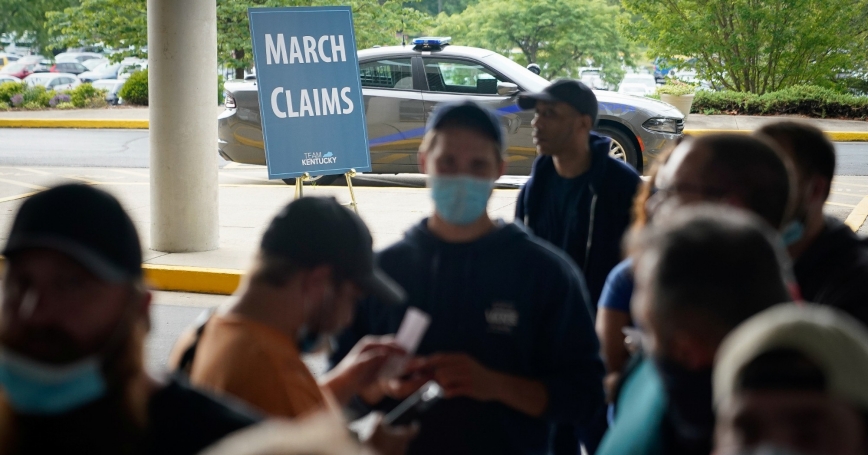 People line up outside a career center, hoping to find assistance with their unemployment claims, Frankfort, Kentucky, June 18, 2020

In the CARES Act, Congress increased unemployment insurance benefits by $600 a week through the end of July. As those extra benefits approach expiration, lawmakers—and many Americans—are at odds about what should happen next.

Tens of millions of Americans are still without work. No one wants to push the unemployed out into the street (literally or proverbially), but some workers are getting bigger unemployment checks than they ever did paychecks. This appears to be a sticking point as Congress has returned from its recess to debate another pandemic relief bill.

Can't unemployment benefits simply be capped, say at 85 percent of a given worker's typical wage? That is, can't the federal government do a replacement-rate top-up, rather than a flat-dollar top-up?

Yes, it's possible—but not practical or politically palatable.

Right now, someone who lost their job due to the pandemic gets the benefit for which their home state determines they are eligible (paid out of state trust funds), plus $600 (paid for by the federal government). Instead of a flat add-on, some have asked why this federal contribution isn't set to achieve an overall fixed wage replacement rate, like 85 percent. In that case, the federal government would top up state benefits so that the combined total would reach 85 percent of a worker's typical wage.

States already calculate the average weekly wage of a worker who applies for benefits; it would be simple enough to determine what 85 percent of that is.

Then things start to get complicated.

Capping unemployment benefits at 85 percent of a given worker's typical wage is possible, but not practical or politically palatable.

The first problem: benefits caps. Most people would agree that there should be some limit to wage replacement; otherwise the government could be paying out 85 percent replacement to someone who earned $100,000 a year. But currently there are 51 different caps in benefits, from $235 in Mississippi to $823 in Massachusetts. In low-benefit states, an 85 percent wage-replacement benefit would be meaningless unless Congress also mandates a new cap that applies to all states.

Then there's the sensitive issue of payroll taxes. Unemployment benefits are financed through a payroll tax paid by the employer. These tax rates can influence where companies decide to locate and create new jobs. (Recall how Amazon said local tax rates were a factor during its search for a second headquarters.) As a result, some states deliberately keep unemployment benefits meager so that tax rates on businesses stay low.

The logistics of this aren't easy, either. Claims have to be calculated, certified, and administered, and then the difference to get to a hypothetical 85 percent replacement rate would either be reimbursed to the states or administered separately by the federal government. As many of the nearly 50 million people who have applied for benefits in the last three months can tell you, the administrative capacity of states to process claims is limited.

So even if a standard nationwide replacement rate was achievable, it's probably not politically palatable.

Unemployment insurance is a program with incredible variation across states, and one consequence of that is an unfair system. Workers can earn the same amount, but one receives half the benefits; businesses can employ the same number of workers, but one pays half the tax.

The flat $600 top-up sidestepped these issues. By giving every unemployed worker the same amount, it addressed benefit disparity without fixing it and stayed neutral on tax policy. A replacement-rate top-up and new, national maximum benefit would fix benefit disparity but would provide a large business subsidy to low-tax states, while doing little for businesses in higher-tax states.

This is the last week of the CARES Act $600 benefit, but the eighth decade of UI benefit and tax disparity.

No matter what Congress decides to do in the coming weeks—on which no less than the livelihoods of 30 million Americans hang in the balance—those problems will remain until the financing of the unemployment system gets reformed.