Will the Real Kim Yo Jong Stand Up? 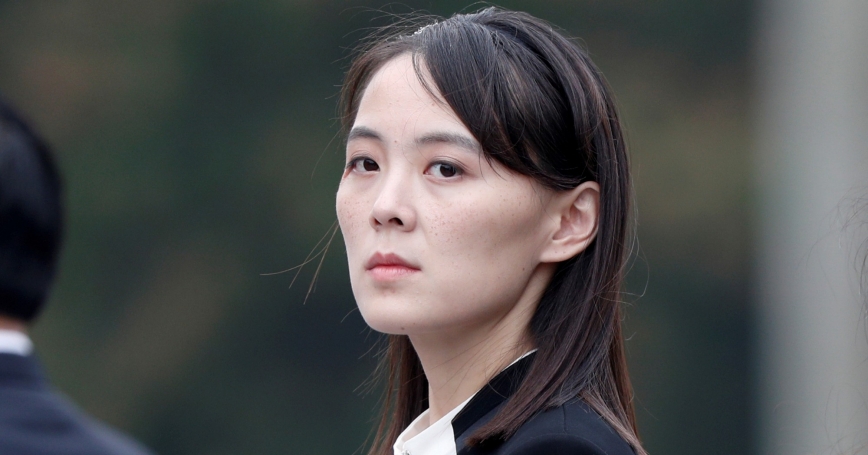 It is incredibly difficult to get any reliable information about the leaders in North Korea. For a variety of reasons, North Korea practices extreme information denial. And the little information it does release is heavily tainted by North Korea's particular political objectives of the day.

This is especially true with Kim Jong Un's younger sister, Kim Yo Jong. For years she exuded a smiling and personable image while acting in a servile relationship to her brother. While being part of the supposed “god” Kim Family, she avoided any appearance of leadership, carrying an ashtray for her brother's cigarette, bringing him a tray with the scissors for a ribbon cutting ceremony, and pulling back the chair to seat President Kim Yong Nam, the official leader of the North Korean delegation, when they met with South Korean President Moon during the 2018 Olympics. During the North Korean theater ballistic missile tests last September, pictures of Kim Jong Un at the tests with his advisers show Kim Yo Jong in the far but visible background.

And all this despite the fact that in 2002 her father, then North Korean leader Kim Jong Il, had said that she, “…was interested in politics and wanted a career in the DPRK's political system.”

Still, remember that North Korea is a country where being a rising political star, and especially being designated one of the most senior leaders, is likely to get you purged if not executed. Moreover, North Korea has been and remains a patriarchal society, and it is not clear that the political and military leaders in the North would accept a woman as the leader. Having demonstrated a clearly supporting role to her brother, she has avoided appearing to be a threat to the paranoid Kim Jong Un, who has eliminated potential rivals in his family: Kim had his uncle executed in 2013 and had his older half-brother assassinated in 2017.

North Korea has been and remains a patriarchal society, and it is not clear that the political and military leaders in the North would accept a woman as the leader.

Then in early March of this year, the situation changed. Kim Yo Jong began taking on a spokesperson role. Kim Yo Jong issued her first statement representing the North Korean regime, accusing the South Korean Presidential Offices of being “idiotic” and having an “incoherent and imbecile way of thinking” for denouncing the North's first missile tests of 2020. Later in March she thanked President Trump for offering assistance against COVID-19, which she declined. Her tone then escalated in early-June, when she lashed out in extremely harsh terms against North Korean defectors sending leaflets into North Korea, calling them “human scum” and “rubbish-like mongrel dogs” and severely criticizing the South Korean government before threatening to abort the North's role in inter-Korean peace talks. North Korea subsequently severed most communications with South Korea, which were symbolic of inter-Korean rapprochement. Then she again officially criticized the defectors, expressed her exasperation with inaction by the South Korean government against the defectors and said she had directed the “department in charge of the affairs with enemy” to take the next action, implying that South Korea had become the North's enemy.

On June 16, North Korea destroyed the inter-Korean joint liaison office in Kaesong, which had also been a key symbol of rapprochement. This was a serious shock to the South Korean government. Kim Yo Jong then escalated the crisis by blaming Moon personally for the breakdown of inter-Korean relations, accusing Moon of “pro-United States flunkyism and submission.”

North Korea was clearly trying to disrupt the South Korea–U.S. alliance, and also trying to get the South Korean government to start joint economic projects with the North to break the North's economic troubles associated with international sanctions. President Moon's office responded most seriously to this personal criticism. Fortunately, Kim Jong Un stepped in a week later and deescalated this confrontation.

These recent events have changed many observers' perspective of Kim Yo Jong. As one colleague put it, “It is entirely possible Ms. Kim would be even more tyrannical than her brother, father, or grandfather.” And so she may need to be in order to remain a leader in North Korea. Still, it is not known whether her recent behavior was intended more to establish credibility with North Korean hardliners or if it even originated with her—she has not delivered these messages in statements to the North Korean press and not via personal interviews with the outside media during which her actual perspective might be measured. After all, at least some of her messages were likely written by her brother and his staff or at least approved by them.

Observations of her behavior are complicated by her brother's own changed behavior. Starting in late January, Kim Jong Un has disappeared for 20 or more days three times, a total contrast to his previous efforts to appear to be a man of the people, like his grandfather. Rumors continue to circulate that he has been in bad health, with some unconfirmed assertions that the regime has used body doubles in his place as part of a transition to build the image of Kim Yo Jong so that she can eventually assume her brother's place.

Bruce W. Bennett is a senior defense analyst at the nonprofit, nonpartisan RAND Corporation and a professor at the Pardee RAND Graduate School.

This commentary originally appeared on The Hill on July 6, 2020. Commentary gives RAND researchers a platform to convey insights based on their professional expertise and often on their peer-reviewed research and analysis.